Fujitsu Laboratories Limited today announced the development of technology that makes it possible to transfer files between a PC and a mobile device by simply using a mobile phone or tablet to capture a video of a file displayed on a PC screen. The new technology is based on Fujitsu Laboratories' previously developed intermediary image communications technology(1), which enables communication between a PC screen and a mobile device by superimposing invisible communications data into images that can be captured by a mobile phone camera.

By superimposing IP addresses and other device-specific information that is invisible to the human eye onto a PC screen in real time, the technology can identify the target PC when the user takes a video of the screen with a mobile phone camera. A communications path between the target PC and mobile phone then gets established and transfers the file displayed on the screen to the phone. This makes it easy to transfer a file with a simple image capture, unlike existing methods that require complicated operations, such as having users search for and select a file from the phone's file menu. The technology is expected to lead to a variety of applications, such as forwarding photographs captured on a mobile phone to a PC or enabling multiple users to simultaneously download individual copies of presentation materials to their mobile phones during a meeting by shooting the screen displaying the presentation.

Thanks to the advanced capabilities of mobile phones and the popularization of tablet devices in recent years, tasks that were previously only viable with a PC, such as viewing and editing files, are now possible on mobile devices. As a result, there is a greater need to be able to transfer files between PCs and mobile devices. For example, users often copy files created on their PC to a mobile phone or tablet, where they can view or edit them. They are also capturing photographs or video clips on a mobile phone and then copying them to a PC which they then use to view them. At the same time, for the average user, connectivity between PCs and mobile phones still poses a considerable barrier, and solutions have been sought to simplify the process of transferring files between the two.

A number of methods exist for transferring files between a PC and mobile phone such as transferring via a USB cable, a Wi-Fi connection, or sharing files over the cloud. With these methods, users are typically required to configure the connection of the devices or, in the case of cloud computing, the files are transmitted over the Internet which poses security risks when dealing with sensitive company files. However, each of these approaches requires users to perform complicated operations to search and select specific files from a file menu. Previously, an approach that could be intuitively performed in just a few steps was not possible.

With regard to an approach for transferring files between PCs and mobile phones, methods that employ image detection technology to analyze images of a PC screen captured by a mobile phone camera already exist. However, because no unique identifier information, such as the PC's IP address can be identified by such technology, such methods have required users to go to the trouble of preparing a way for the PC and mobile phone to communicate with each other.

Fujitsu Laboratories has developed technology that can automatically transfer a file displayed on a computer screen to a mobile device simply by holding up a mobile phone pointing the camera at the computer screen. 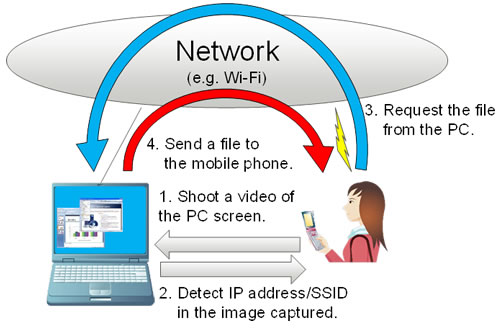 This technology makes it possible to easily transfer files between a PC and mobile phone by simply holding up a mobile phone to the computer screen. It opens the door to a wide range of possible applications, including:

Going forward, in aiming to commercialize the technology during fiscal 2014, Fujitsu Laboratories will work to improve the technology's speed of communications from PC screens to mobile phones.