Fujitsu Laboratories Limited announced that it has developed a simulation technology that models customers' behavior as they shop, making it possible to visualize the complex circumstances surrounding crowding in stores.

More and more research is being done in the field of social simulations, which model individual behavior and visualizes potential future social phenomena. Fujitsu Laboratories has been focused on adapting social simulations to the world of business, as a technique to support better decision making.

The new development applies social simulations to the real-world business problem of a retail store layout design. In a retail store, the layout and number of cash registers can have a significant impact on crowding. Although queuing theory has long made it possible to analyze waiting times in lines at cash registers, it has not been possible to grasp the ways that the layout of a store can effect in-store crowding. By modeling the behavior of shoppers at cash registers, the technology reproduces the conditions that lead to crowding. This makes it possible to compare crowding levels under different conditions and to understand the factors that cause crowding, enabling informed decisions based on more information.

While there is a growing interest in improving productivity in the service sector, the fact that services need to accommodate for a complex range of conditions, including individual customer characteristics, means that typical engineering-oriented techniques are difficult to apply to decision making. As such, stores are run based on the experience and instincts of managers. On the other hand, there has been much interest in social simulation research that supports understanding of complex social phenomena. Social simulation aims to support decision making and human reasoning by modeling human behavior and simulating interactions. But social simulation is a new field, and few studies have been used practically in a business context.

New types of checkout systems have been introduced to reduce staffing costs and increase efficiency during the payment process at cash registers in supermarkets, drugstores, and other retailers. Typically, when studying crowded conditions in stores, queuing theory is used to calculate waiting times, by varying the number of registers and shoppers, but real-world observations of crowding in stores have shown that, depending on time of day, all registers may be equally busy, or some may be empty while others are particularly busy (Figure 1).

By combining three behavioral logics of shoppers, Fujitsu Laboratories was able to clearly reproduce all of the actual observed patterns of crowding shown in Figure 1. Figure 2 illustrates each area of logic. 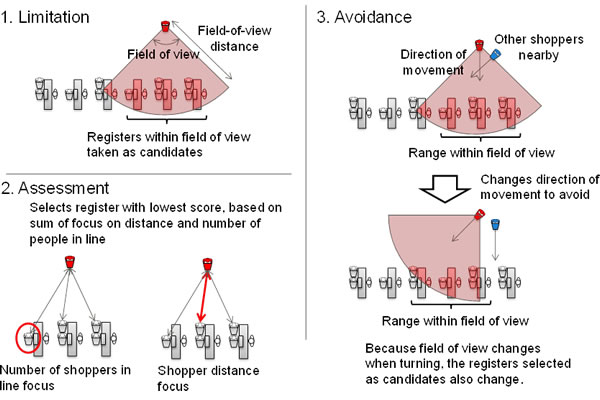 When these behavioral rules were modeled and changes in crowding situations were simulated, the crowding situations shown in Figure 3 resulted, reproducing those observed in the real world. Eliminating any one of the three areas of logic made it impossible to reproduce these states.

This technology makes it possible to visualize a variety of potentially crowded situations resulting from changes to a number of factors, including the number and layout of registers as well as lane opening and closing times, using a technique called scenario analysis(1). Based on these visualization results, a variety of risks and possibilities for the store can be studied in advance, and changes to these factors, or the use of more staff to guide shoppers to empty registers, can be discussed. This would be done to enable better decisions based on more information.

As described below, this technology was used to analyze the effect of different register layouts on crowding. Here are results displaying the impact each of the two register layouts below has when most customers appear from a central aisle.

Even with the same layout, other variables, such as the number of shoppers and the number of articles they are buying, will mean different results, so these factors were set randomly, and multiple simulations were performed. Figure 5 shows the average time required for a shopper to check out for every ten rounds of simulation.

Comparing the average times for every ten rounds shows that Layout 1 requires more time to check out. Layout 2, however, in some cases also required a long time. Analyzing these crowding situations reveals that long waiting times are the result of shoppers with a lot of items being concentrated around the central registers, so clearly what is needed is a way to guide them to other registers. This technology makes it possible to develop a detailed understanding of crowding situations and study ways to improve them.

Fujitsu Laboratories has already applied this technology to visualize the complex factors leading to crowding situations in retail stores. In 2013, it plans to launch a business trial to support decision making with regard to layout design using a simulator that incorporates this technology. Beyond that, Fujitsu Laboratories will seek to apply this technology to other complex service operations, including customer support, social welfare and healthcare. It will also continue advancing social simulation techniques, assessing the effects of new solutions in advance, and developing decision-support technologies.