Fujitsu Laboratories of America, Inc. (FLA) and Fujitsu Laboratories Ltd., today announced that Fujitsu is the first Japanese company to demonstrate a system compliant with the OpenADR2.0a specification(1). The demonstration is part of the interoperability plug-in event at Grid-Interop 2012, the largest Smart Grid interoperability event in the United States, held in Irving, Texas between December 3rd and 6th, 2012. Grid-Interop is an annual forum organized by the GridWise Architecture Council (GWAC), which was formed by the U.S. Department of Energy to promote interoperability in the Smart Grid space.

Demand Response (DR) technology has attracted significant attention as it provides an effective mechanism to maintain balance between supply and demand throughout a smart city. DR works by prompting users to curtail electricity consumption when a utility is nearing its generation capacity. Fujitsu completed development of a Demand Response Automation Server (DRAS) prototype that is compliant with OpenADR 2.0a, the international DR standard, and is the first Japanese company to perform interoperability testing with other vendors' products at Grid-Interop 2012.

Today's power grids face a number of challenges, including an unprecedented growth in electricity demand coupled with ever-increasing power generation costs. Information and communication technology (ICT) and clean energy technologies, such as renewable energy, are considered to be key components in addressing these challenges and building a sustainable society of the future.

In the US, the National Institute of Standards and Technology (NIST)(2) is organizing efforts for standardizing DR technologies, and OpenADR specifications are being formed as a uniform communication protocol to transmit control signals (DR signals), such as curtailment requests, between utilities and electricity users. Fujitsu, as a member of OpenADR Alliance(3) in charge of developing and promoting OpenADR standards, is among the first to develop DR technologies and services that are compliant with international standards.

FLA has developed a prototype DRAS system and DR client compliant with the OpenADR 2.0a profile standard. The system is being demonstrated at the international Grid-Interop 2012 forum, where Fujitsu is participating in an OpenADR Plug-In event to test interoperability with other vendors. DRAS is a server that enables utilities and customers to automatically send and receive control information (DR signals), such as curtailment requests and responses. For example, when a utility sends a curtailment request to the DRAS, appropriate energy use curtailment commands can be sent to smart appliances in customers' homes that support DR services and energy management systems in buildings and factories (BEMS/FEMS). Once an order is received, electricity use can be automatically curtailed according to pre-defined settings made by each customer.

At the OpenADR Plug-in test, Fujitsu will confirm that DR signals can be accurately sent and received between its DRAS and other vendors' energy management systems deployed at customers' sites.

Through the interoperability test, Fujitsu aims at promoting an interoperable DR infrastructure that is compliant with international standards, thereby contributing to the creation of a sustainable society. 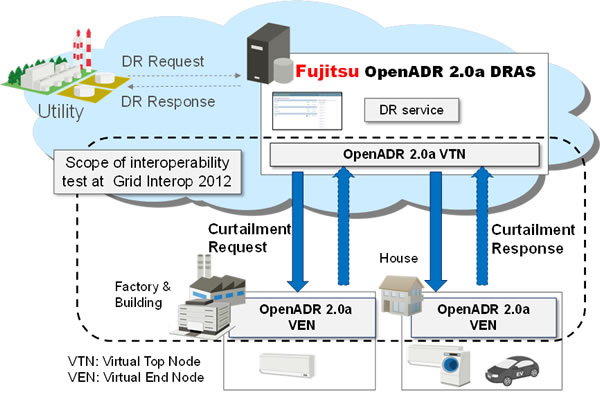 Fujitsu Laboratories of America, Inc. is a wholly owned subsidiary of Fujitsu Laboratories Ltd. (Japan), focusing on research on Internet, interconnect technologies, software development and solutions for several industry verticals. Conducting research in an open environment, it contributes to the global research community and the IT industry. It is headquartered in Sunnyvale, CA.
For more information, please see: www.fla.fujitsu.com.