Reduces the total cost of ICT deployment by 30% through use of virtualization and online file servers, while also cutting energy consumption by 46%

Fujitsu and Kansai University today announced that they have collaborated in enhancing Kansai University's educational research system platform through the use of cloud computing. The new system began full-fledged operations on September 21, 2012.

By employing virtualization technology, the new system consolidates the previous array of 21 servers down to only two. Furthermore, Kansai University's file servers for both students and faculty members were further enhanced with the deployment of "Organic Storage Service II," Fujitsu's cloud-based online file storage service that is able to dynamically scale its storage capacity to match changes in usage volume. The addition of this new service works to further optimize the deployment of ICT resources, increase operational efficiency, and improve system security.

As a result of these moves, Kansai University has successfully lowered its total ICT costs by 30% while cutting its electricity consumption by 46%. Furthermore, by using the Fujitsu Akashi System Center, which has comprehensive disaster mitigation measures as well as advanced security features, the University has also enhanced its security. In addition, both students and faculty members are now able to access the university's email and file services 24 hours a day and 365 days a year, even when the university is subject to legally mandated rolling blackouts.

In light of Japan's declining birthrate in recent years, many Japanese universities are involved in various initiatives to transform themselves. For Kansai University, as well, expanding services for students, cutting expenses, and optimizing ICT resources had become important issues. 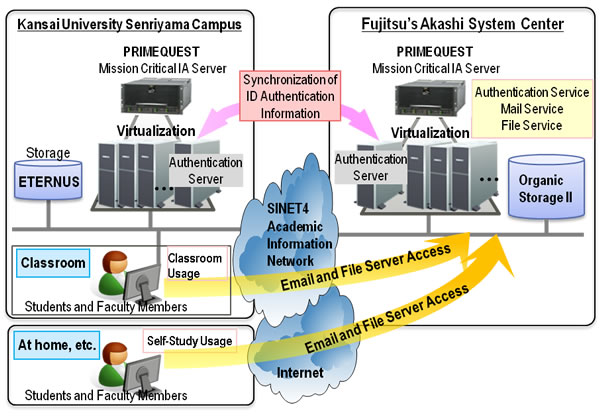 1. Strengthening the system platform and optimizing ICT resources through virtualization

After observing that the actual utilization of servers was far less than initially estimated, Fujitsu employed virtualization technology to reconfigure Kansai University's original array of 21 servers, including those for e-mail and authentication, consolidating them down to just two of its robust PRIMEQUEST 1400S2 Mission Critical IA Servers, which achieve both higher reliability and availability than the previous servers. The two servers are tied together via the university's SINET4(1) academic information network. One handles e-mail and file services for both students and faculty members and is located within the Fujitsu Akashi System Center, which has comprehensive disaster mitigation measures as well as advanced security features. The other server is deployed on campus and replaces the servers managing student, faculty, and staff member information as well as conducting resource management . By adopting the Fujitsu "UnifIDone" integrated ID management system, the authentication systems on both the on-campus server and the one in the Fujitsu Akashi System Center have been synchronized. Now, even if power is down on the on-campus system platform during a power outage, user authentication is still possible through the Akashi System Center. This enables students and faculty members to access e-mail services and browse documents such as teaching materials, reports, and research materials 24 hours a day, 365 days a year.

In anticipation of increased use in a few years, the file server utilized by both students and faculty members had previously allotted each person with 1GB of storage capacity, but it was never fully used. With the construction of the new system, the Fujitsu "Organic Storage Service II," an online file storage service that is able to increase its storage capacity on demand, has been employed in order to enable the system to flexibly alter storage volume to meet changing needs for capacity. Since Organic Storage Service II is a cloud-based file service, the allotted storage space can be used as a personal drive within on-campus computer labs. By employing this service, Kansai University was able to reduce its file servers retained on-campus by 60%.

By employing a virtual environment and by utilizing a cloud-based online file server service in constructing its new system, Kansai University has successfully reduced its electricity consumption by 46%. This move has enabled the university to cut its annual CO2 emissions volume by 168 tons, which is equivalent to the CO2 absorption of 12,200 cedar trees. Furthermore, with the optimization of ICT resources and the subsequent improvements in ICT operational efficiency resulting from that optimization, the university has reduced its total ICT costs by around 30%.

Moving forward, Kansai University will continue to promote the movement towards cloud-based services within its ICT environment, with the construction of this new stronger system platform serving as a first step toward that goal. From next fiscal year onward, the university will consider new projects, such as renovating PC classroom environments using DaaS, and is also eyeing improved usage efficiency and stronger integrated authentication through developing a campus-wide cloud platform. Kansai University will also actively pursue effective and eco-friendly ICT deployment, while maintaining an educational environment that develops the human resources who will make contributions to our society in the future.

Fujitsu, leveraging know-how gained from supporting ICT deployment in many universities, plans to offer a wide range of services dedicated to supporting next generation education.