Fujitsu Laboratories Limited today announced that it has developed a CMOS power detector with built-in temperature compensation, featuring a compact design and low power consumption suitable for use in smartphones and other mobile terminals.

Reducing the mounted area required for components and circuits in mobile terminals is an important factor in reducing their size and cost, but they occupy a relatively large mounted area, because the power detectors used in the transmitters for wireless communications terminals are typically comprised of several radio-frequency (RF) amplifiers. Diodes are known to be an alternative for making power detectors smaller, but their characteristics change with temperature, and the temperature compensation they require has been problematic.

Fujitsu Laboratories has developed a diode-based power detector with a technology that simultaneously enables temperature compensation, resulting in a power detector with a mounted area of only 0.04 mm2 and power consumption of 0.3 mW. Compared to conventional detectors, this requires less than 1/25th the mounted area and consumes 1/10th the power, contributing to smaller, less expensive mobile terminals.

Details of this technology are being presented at ESSCIRC 2012, the European Solid-State Circuits Conference 2012, which opened on September 17th in France.

In recent years, the popularity of mobile terminals such as smartphones and tablets has soared. These mobile terminals are comprised of a large number of internal components; therefore, reducing the mounted area required for these components and circuits is an important factor in reducing overall size and cost. 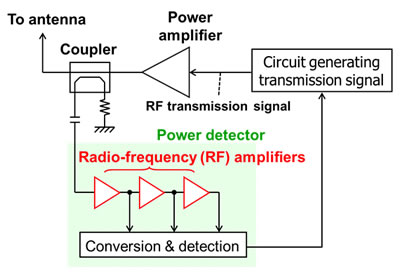 Figure 2: Influence of temperature when power detector is integrated with power amplifier

Fujitsu Laboratories has developed a technology that obviates the need for the RF amplifier and applies temperature compensation to diode-based power detection (see Figure 3). Power detection is conducted by generating a current in proportion to the power using a diode. 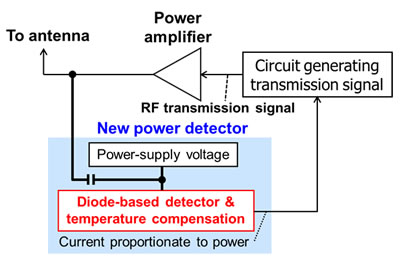 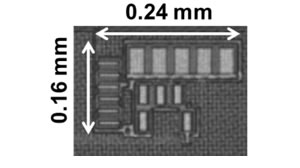 Over a range from -30°C to 125°C, this technology achieved detection accuracy on par with conventional detectors (input dynamic range(1) for a detection error within ±0.5 dB is 20 dB or more). This detector supported three frequencies used by WCDMA(2), Band I (2.1 GHz), Band V (850 MHz) and Band IX (1.7 GHz), this circuit technology may be applied to the LTE(3) wireless standard. Owing to its compactness, low-power operation, and temperature compensation, it is amenable to being integrated with power amplifiers.

To apply this technology in practical terms, and make it compatible with future wireless standards, Fujitsu Laboratories plans to continue improving its detection accuracy and expanding its range of power detection.