As a result of the spread of datacenter-centric cloud services, smartphones and other technologies in recent years, a wide variety of network-enabled services are now being offered. At the same time, for the core networks supporting these services, it is important to be able to shorten the time required to bring online new optical circuits that deliver on-demand services, as well as to increase transmission capacity while reducing the energy consumption of network devices. In light of this, Fujitsu has developed two technologies: "flexible optical node" technology that overcomes limitations in terms of optical signal wavelength, modulation scheme and routes; and "spectrum defragmentation(1) technology," which leverages flexible optical nodes to increase the utilization efficiency of in-service optical network resources. This, in turn, makes it possible to improve optical network transmission capacity by up to 40%.

Using the new technology, optical network architecture can be flexibly altered as needed, and given the improvement in the utilization efficiency of network resources, it is possible to accelerate bringing online new optical circuits while reducing power consumption by eliminating unnecessary network devices.

The digital signal processing LSI employed to test the effectiveness of the new technology was developed as part of Japan's Ministry of Internal Affairs and Communications (MIC)'s project for "R&D on Ultra-High-Speed Optical Transmission Technology."

The new technology will be announced at the European Conference on Optical Communications (ECOC) 2012, to be held in Amsterdam from September 16 - 20.

It seems like every day there are ongoing changes in the ways in which networks are employed, including a variety of applications provided through cloud services, which have expanded primarily thanks to large-scale data centers, and high-speed mobile devices as represented by smartphones, as well as sensor networks and other machine-to-machine (M2M) communications. At the same time, for the core networks supporting these applications, optical fiber network technology has begun to enable the implementation of 100 Gbps/channel-class systems, and in the future, transmission systems achieving greater than 400 Gbps are expected to be available. In addition to expanding the capacity of such transmission systems, there is a need to offer end-users a variety of flexible network capabilities without having to increase the power consumed by communications nodes and add excess equipment. Such capabilities include offering high-capacity communications routes for on-demand services, the rapid delivery of alternative routes during major natural disasters, and optimal route selection that enables dynamic route reallocation.

The following challenges are evident in bringing about the next generation of high-capacity and flexible optical networks.

1. Limitations to the usable spectrum and communications routes of optical networks

Due to the limitations of optical components and electronic components used inside current optical switch nodes and optical transceivers, it is not possible to freely configure the optical wavelengths, bandwidth, modulation schemes and communications routes employed for communications. As a result, to bring new optical circuits into operation, cables have to be manually rerouted and new equipment deployed.

As a result of constantly adjusting optical spectrum routes while a network is in use, fragmentation can occur in the assignment of optical signals that were initially allocated to optimize network utilization efficiency. This spectrum fragmentation makes it impossible to allocate optical fiber communications routes and bandwidth, a process that is necessary to launch new optical circuits, thereby diminishing the utilization efficiency of transmission equipment.

To address these challenges, Fujitsu has developed technology that can dynamically adjust the architecture of optical network resources and increase utilization efficiency without disrupting service. 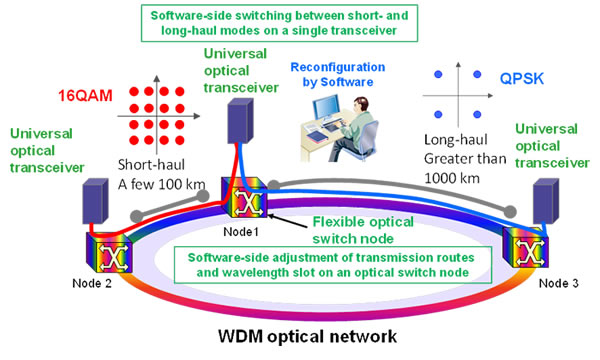 Fujitsu has developed a network control mechanism that employs a defragmentation algorithm for securing usable bandwidth allocable for high-volume data by consolidating fragmented spectrum into an uninterrupted spectrum continuum. Using a flexible optical node device architecture, fragmented optical spectrum resources are continuously consolidated into a wavelength band of a size that is allocable for 400 Gbps-class wide-band signal, all while the network remains in service. By channeling the resulting wavelength band into properly configured optical signals, it is possible to improve the utilization efficiency of spectrum resources.

In an experimental network environment featuring four optical switch nodes, Fujitsu demonstrated—for the first time in the world—the use of defragmentation technology employing digital signal processing technology to shift a 100Gbps DP-QPSK optical signal(2) without disrupting service. By taking advantage of the signal bandwidth made available through the defragmentation process, optical network communications capacity can be improved by 40%. 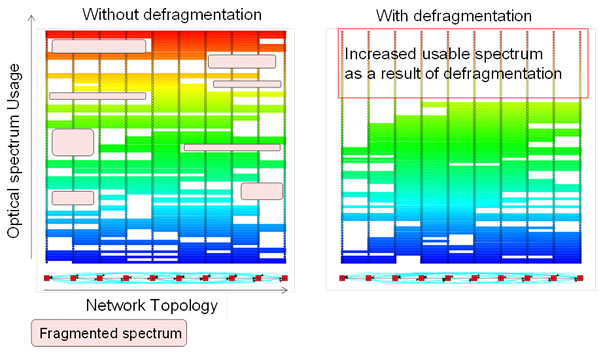 Using the new technology, optical network architecture can be flexibly altered as needed, and given the improvement in the utilization efficiency of network resources, it is possible to shorten the time required to launch new optical circuits, while cutting power consumption by eliminating unnecessary network devices.

Fujitsu will work to standardize 400 Gbps-class next-generation interfaces while developing hardware and pursuing R&D on network management systems in aiming to commercialize the new technology.

Fujitsu Laboratories of America, Inc. is a wholly owned subsidiary of Fujitsu Laboratories Ltd. (Japan), focusing on research on Internet, interconnect technologies, software development and solutions for several industry verticals. Conducting research in an open environment, it contributes to the global research community and the IT industry. It is headquartered in Sunnyvale, CA. For more information, please see: www.fla.fujitsu.com.