Fujitsu Laboratories Limited today announced the development of an integrated silicon optical transmitter for use in an optical transceiver(1), which is essential for enabling large volumes of data to be transmitted between CPUs.

This technology enables compact, low-power optical transceivers to be mounted directly in CPU packaging. Through its application exaflops-class supercomputers(3) and high-end servers requiring high-speed transmission of large volumes of data, the technology paves the way for super-high-speed computers.

Details of this technology will be presented at the 9th Group IV Photonics international conference (GFP 2012), running August 29-31 in San Diego.

In recent years, supercomputer performance has been roughly doubling every 18 months. Right now, work is underway to produce exaflops-class supercomputers with a target date around 2020. The creation of these ultrafast computers will require high-volume data transmission technology that allows individual CPUs to transfer data to each other at tens of terabits per second. With existing electrical interconnects based on copper wire, however, the dramatic increases required in circuit space, number of transmission lines, and electricity consumption in accordance with the higher data volumes are thought to make it difficult to achieve the data transmission speeds needed for exaflops-class supercomputers. As a result, consideration is being given to the use of optical interconnect technology in which, as shown in figure 1, CPUs are connected using light. Recently, in particular, attention is being focused on the development of silicon photonics(4) technology enabling optical transceivers to be compact and densely integrated, and that enables integration of electrical and optical components. 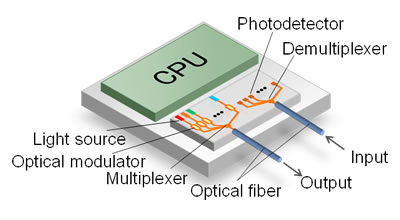 The transmitter component of an optical transceiver comprises a light source and an optical modulator that encodes data into the light emitted by the light source. A good candidate for the optical modulator is a ring resonator(5), as it is compact and energy efficient. But because the optical transceiver is located near the CPU, the lasing wavelength and the operating wavelength of the ring-resonator-based optical modulator do not coincide with each other due to heat from the CPU, resulting in information not being encoded in the light. A thermal control mechanism is needed to ensure that they match exactly, which, however, is an obstacle to making the transceiver compact and energy efficient.

Figure 2 depicts the prototype silicon optical transmitter that integrates the light source and optical modulator. To enable shifts in the wavelengths caused by temperature changes to match, the same ring resonator is used for both the wavelength control unit of the light source and the optical modulator. Moreover, to safeguard operation even if there are slight differences in the wavelengths of the light source and optical modulator, the optical modulator is structured with an alignment of multiple ring resonators, increasing the operating wavelength range. Using this structure, there is no need for a thermal control mechanism, and the overall electricity consumed by the optical transmitter was reduced by roughly half compared to previous methods. It is compact, measuring roughly only 2 mm long without the semiconductor optical amplifier. Through optimization using the silicon wire optical waveguide structure(6), it is expected that in the future the size can be reduced to under 1 mm. 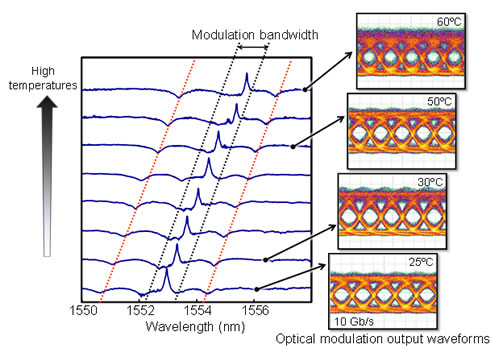 By further increasing the speed of this optical transmitter and integrating multiple transmitters on one chip using wavelength multiplexing technology, it will be possible to create optical transmitters small enough to be embedded into CPU modules capable of transmitting large volumes of data at rates of several terabits per second.

The use of this technology enables the development of exaflops-class supercomputers and high-end servers requiring energy efficient transmission of large volumes of data between CPUs, thereby paving the way for super-high-speed computers.

Fujitsu Laboratories plans to continue development of the optical receiver using the same silicon photonics technology, and will integrate it and this new transmitter to create a compact optical transceiver. Moreover, by applying wavelength multiplexing technology and pursuing dense integration, it will work on developing large-capacity integrated optical interconnects capable of enabling data transmission speeds of tens of terabits per second.