Fujitsu Laboratories today announced that it has successfully developed the world's first single-chip transceiver using gallium nitride (GaN)(1)high electron mobility transistor (HEMT)(2) technology that features an output of 6.3 W and that operates at a frequency of 10 GHz.

In order to simultaneously handle strong transmission signals and weak incoming signals in the same chip, it is necessary to efficiently switch between outgoing and incoming signals, while reducing the impact that outgoing signals have on incoming signals. However, until now, it has been technologically difficult to accomplish both of these objectives in tandem.

Fujitsu Laboratories has resolved this issue by developing a duplexer with low signal loss using a GaN-HEMT, and through high-output circuit integration design technology that controls signal interference between the outgoing and incoming signals. The result is a transceiver chip operating at a frequency of 10 GHz with output of 6.3 W that measures only 3.6mm x 3.3mm, representing a footprint that is less than 10% of the size of the multiple chips that have been needed until now.

With this technology, it is now possible to configure a high-output transceiver using just one chip, enabling systems such as radar equipment and wireless communications equipment to be made more compact.

Details of this technology were presented at the IEEE MTT International Microwave Symposium (IMS 2012) held in Montreal starting June 17.

Gallium nitride (GaN) is used as a material in blue LEDs. Compared to the conventional semiconductor materials of silicon (Si) and gallium arsenide (GaAs), GaN features a high electron transfer rate and relative resistance to the breakdown caused by voltage. Given these characteristics, GaN HEMTs—or transistors that use GaN—show promise for high-output, exceptionally efficient operations.

In line with the advancement of a network-based society, radio wave demand in a variety of wireless systems is expected to increase even further. For example, aircraft radar uses the 10 GHz frequency band, which is able to measure the distance and direction of physical objects with high precision.

Existing radars are configured with separate equipment for transmitters and receivers. A transceiver chip that integrates both functions, however, would enable everything to be integrated in one piece of equipment, allowing systems to become more compact. 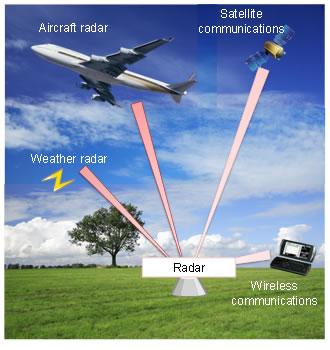 The transceiver chips necessary to make radar and other equipment more compact must deliver high-capacity communications and high output in order to cover a large area. Transmitting high-power signals using the same chip that receives low-power signals requires high-efficiency switching in the outbound signal and reduced impact of outbound signals on inbound signals. Achieving both of these goals has been problematic.

Fujitsu Laboratories developed the world's first single, compact transceiver chip that uses GaN-HEMT and operates in the 10-GHz band. Its key features are as follows:

A new duplexer was developed that uses GaN-HEMT (Figure 2, right). This measures 1.8 mm × 2.4 mm, with 1.1 dB transmission loss in the 0–12 GHz range. This is dramatically smaller and lighter than earlier switches using magnetic materials (Figure 2, left)—less than 10% the size.

Figure 2: Comparison of conventional transmit/receive switches and the newly developed one

Via holes for grounding are arrayed around the transistors, shielding against the release of unwanted signals. In addition, the locations and layouts of signal wiring and circuitry were optimized using three-dimensional analysis of electromagnetic radiation to suppress unwanted signal interference (Figure 3). This technology ensures stable operation, preventing the oscillations of high-power circuitry from causing malfunctions.

These technologies were integrated into a single prototype chip that combines a duplexer, a transmitting amplifier, and a receiving amplifier (Figure 4). The chip operates at 6.3 W in the 10-GHz band and measures 3.6 × 3.3 mm, less than one-tenth the size of earlier multi-chip systems.

These technologies make it possible to design a high-output transceiver around a single chip, with applications in radar and broadband communications, promising smaller, lighter systems.

Fujitsu Laboratories intends for this technology to be put to use in a wide range of applications that require compact modules with high output, including wireless communications and radar systems.