This product cuts both the amount of data that it works with and required memory to roughly double the processing performance of the 3D CAD engine(1). This accelerates operational speed on a wide variety of design studies and verifications, even on massive datasets representing tens of thousands or hundreds of thousands of parts, and enables integration of a massive amount of design data. It also includes newly developed security technology to prevent the copying or output of data, reducing the risk of leaks when transnational design teams collaborate. This means that design data that had previously been sent only on paper or verbally or intentionally not sent at all out of security concerns, can now be shared securely.

These technological developments sidestep the shortcomings of transmitting design data via paper, data conversion, or in spoken form, allowing teams at multiple locations, including overseas, to quickly share information. The fact that every location has direct access to the source data in real time means that on-site design, manufacturing, and maintenance processes can be carried out smoothly, and design work conducted more quickly and at higher quality.

In recent years, manufacturers have grown increasingly interested in expanding their share in emerging markets. To bring new models to market that are better suited to local needs, they are strengthening their product development locations in Japan and setting up design and manufacturing operations outside of Japan. The volume of design data being handled in Japan is massive, however, and in many cases, it is deliberately not being fully shared with overseas locations out of concerns for data leaks. This has led to discrepancies in the design and manufacturing data that offshore locations possess, leading to inefficient reworking and revisions, and creating a barrier to smooth international expansion.

This product will be exhibited at Fujitsu Forum 2012, running May 17–18 at Tokyo International Forum (in Chiyoda-ku, Tokyo). It will also be exhibited at iCAD Forum 21st, which will be held May 13 in Tokyo, May 31 in Aichi, and June 6 in Osaka; and at the 23rd Design Engineering & Manufacturing Solutions Expo, running June 20–22 at Tokyo Big Sight. 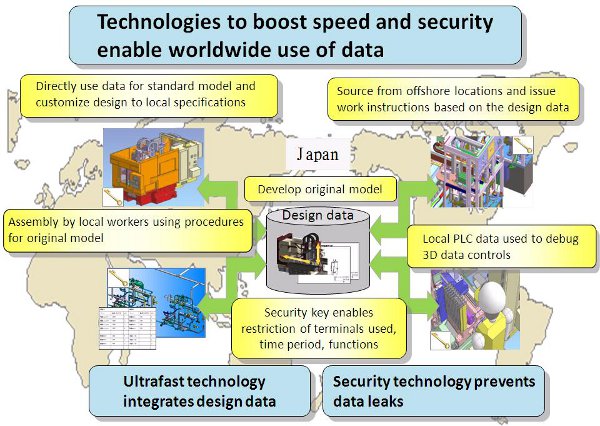 Usage scenario for iCAD V7L2 in Japan and offshore locations

Improved data-compression algorithms reduce both the amount of data being handled and memory requirements, increasing processing performance even beyond the level of the previous 3D CAD engine. This roughly doubles the transfer and copy operation speed, while boosting file-loading speed by about 50%. The result is the world's fastest processing performance. Even with large-scale 3D data representing hundreds of thousands of points, designers can quickly proceed with their various design studies and verification testing without delay. Furthermore, the fact that the data is slimmed down means that more design data can be integrated for display, and massive amounts of design data can be transmitted efficiently.

In the past, when a company in Japan outsourced design work or requested one of its offshore locations to handle the design or processing and assembly of a product, out of concern for information leaks, it often intentionally limited the design data sent, or only conveyed that information verbally or on paper rather than electronically. The lack of complete information has often been a source of mistakes. With iCAD V7L2, a security key is issued to the partner, so the ability to reproduce or print the design data is limited to the holder of the security key. This minimizes the risks of leaks while making it possible to safely share all the data needed for design, processing, and assembly.

This feature has been in beta deployment at Toshiba Elevator and Building Systems, where it has been shown to easily enable safe sharing of data between international locations, promoting the advancement of global design and manufacturing.