Fujitsu Laboratories Limited today announced development of the world's smallest and slimmest palm vein authentication sensor that is capable of being employed in tablet devices. By upgrading the technology's design with new image sensors and other optical components, Fujitsu Laboratories has successfully slimmed down the new sensor to a thickness of 5 mm.

The new sensor preserves the same authentication performance as existing technology while halving thickness of current models. This also enables easy deployment to mobile devices, such as tablets and slate PCs, which are becoming increasingly slimmer, and helps to expand the range of applications for palm vein authentication. More customers will now be able to perform secure authentication using simple operations.

In recent years, to prevent damage caused by information leaks and identity fraud at companies and financial institutions, biometric authentication technologies, which leverage a user's biological information, have become prevalent as a means to verify an individual's identity.

The technology has been commercialized by Fujitsu as a non-contact palm vein authentication system called PalmSecure, which is used, for instance, by banks to authenticate customers, for computer log-in, and in room-entry/exit management systems. Last year, Fujitsu successfully developed and commercialized a sensor that features a smaller and thinner footprint, as well as a simpler authentication process (Figure 1). This is useful in the business world which in recent years has seen the explosive growth of slate PCs and tablet devices, and the subsequent need for improved security in compact devices which has grown to an unprecedented level.

Conventionally, in order to successfully develop a palm vein authentication sensor that achieves both high-speed authentication and simple user operations, a high-performance image sensor with a large optical area was required. This requirement, however, has presented challenges in terms of miniaturization, and has limited the use of such technologies to A4-size notebook PCs.

In addition, even if it were possible to create a smaller and thinner sensor, images captured by such a sensor would be notably different from those generated by existing palm vein sensors, meaning that data compatibility with existing models could not be guaranteed. This presented certain restrictions when building systems that incorporated the technology.

Fujitsu Laboratories has developed the world's smallest and slimmest ultra-compact palm vein biometric authentication sensor that is capable of being employed in tablet devices. With a newly-designed optical system, the new sensor preserves the same authentication performance as existing technology, despite using a compact image sensor with a smaller optical area. Features of this newly developed technology are as follows (Figure 2).

Because the new design employs a compact and low-cost image sensor, it achieves an overall reduction in size and thickness for the entire palm vein sensor. In addition, Fujitsu Laboratories has developed a technique for correcting the quality of images captured by the image sensor so that they can be used for authentication.

Through repeated simulations, Fujitsu Laboratories has developed a new low-distortion wide-angle lens that offers a field of view equivalent to that of existing sensors, regardless of reductions in size and thickness, as well as a diffused lighting system for uniform luminance distribution. These developments ensure that the new sensor is compatible with authentication data from existing palm vein sensors. 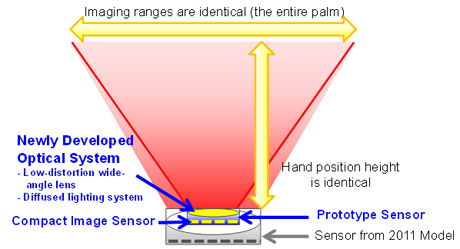 The new technology maintains compatibility with existing palm vein sensors, equivalent authentication performance and a reduction in size and thickness. Compared to Fujitsu's palm vein authentication sensor product that shipped in May 2011, Fujitsu Laboratories has succeeded in reducing the sensor's volume by 80% and in scaling the overall thickness down to only 5mm. This size can be housed in the slot where fingerprint sensors have been installed in previous notebook and slate PC models, and can also be easily integrated into mobile devices, such as tablets, which are becoming progressively slimmer (Figure 3). This innovation will work to expand the range of applications for palm vein authentication, and will allow many customers to perform secure authentication using simple operations.

Fujitsu Laboratories will continue R&D into the commercialization of ultra-small palm vein authentication, while aiming to quickly bring to market miniature devices that employ them.