Fujitsu Laboratories today announced development of a technology that can record stereoscopic 3D images (hereafter 3D images) by attaching a component onto the lens of existing mobile phones or smartphones.

In recent years, there have been an increasing number of opportunities for viewing 3D image content in movies or on TV. Photo and video sharing sites with 3D compatibility have also appeared, and there is significant demand for devices that allow users to capture and enjoy their own 3D content. At the same time, until now 3D image capture required specialized equipment, making it difficult for the average user.

It is for this reason that Fujitsu developed a technology that enables the capture of 3D images. This is accomplished by affixing a compact and low-cost attachment onto the lens of any currently available mobile phone or smartphone, with the captured images processed via cloud computing to convert into 3D content.

The new technology will make it possible for users to easily capture 3D images, and is therefore expected to contribute to the future popularity of 3D content on blogs, web pages, and photo and video sharing websites.

Details of the new technology will be announced at the International Symposium on Consumer Electronics (IEEE ISCE), to be held on Monday, June 4, 2012 in Harrisburg, Pennsylvania in the United States.

Recent years have seen 3D content in movies or on TV become increasingly popular. In addition, even though users are already equipped to view 3D images—illustrated by the increased support for 3D on Internet photo and video sharing sites—there is a noticeable lack of 3D content to actually view. This means a significant demand exists for devices that allow users to capture and enjoy their own 3D images.

A typical user who wants to record 3D images currently must acquire specialized equipment featuring two separate pairs of lenses and imaging sensors—a hurdle for most 3D enthusiasts. Moreover, the process of removing distortion from the two captured images and converting them into easy-to-view 3D content requires heavy processing. This has posed significant challenges considering the performance of existing mobile phones and smartphones.

Features of the Newly Developed Technology

Fujitsu has developed a compact and low-cost technology to record 3D images by using an attachment that when affixed to a mobile phone or smartphone lens can record 3D images, then process via cloud computing.

Features of the newly developed technology are as follows.

Fujitsu leveraged its proprietary image processing technology (Figure 1(a)) to develop an attachment that directs outside light from two different directions into a single image sensor, while being of a size small enough to attach onto a mobile phone or smart phone lens. Distortion may occur in 3D images (Figure 1(b)), so corrective processing once the distortion has been captured by the camera's imaging sensor is performed. This made it possible to shrink the attachment, composed of four flat mirrors, to a mere 57 x 14 x 14 mm. This helps reduce the cost of the technology by 90% compared to products currently on the market.

By leveraging cloud computing to perform load-intensive processing—including processing to correct distortion caused by the accessory's mirrors (Figure 2) and processing to convert the content into easy-to-view 3D images—the technology can be used on mobile phones and smartphones without special software or processors (Figure 3). 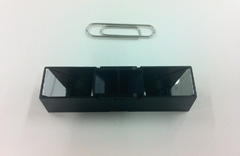 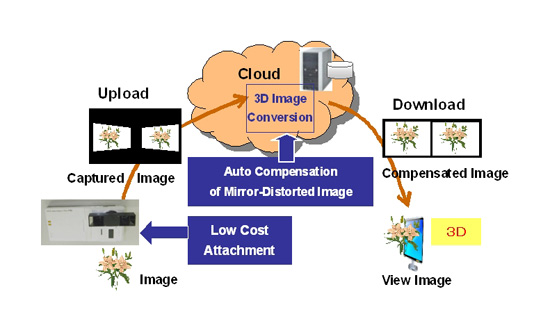 The new technology will enable users to record 3D images on their existing mobile phones or smartphones without buying any special equipment. As a result, user-made 3D content is expected to grow, thereby helping to resolve content shortages on 3D-compatible photo and video sharing sites. In addition, by employing 3D images on their blogs and websites, users have easy access to a mode of striking and realistic expression that 2D images cannot replicate, making it possible to share information that is eye-catching to readers. Consequently, it is hoped that the technology will lead to an increase in attractive 3D-enabled content.