Fujitsu Laboratories today announced that it has developed an analog-to-digital converter (ADC) that is 50% smaller and consumes 50% less power than conventional converters.

A typical ADC works by comparing the voltage of an external analog input signal with an internally generated reference level to convert to a digital value. Switches are required to change the reference levels, however, advancements in semiconductor process scaling have made it difficult to guarantee high-speed switching.

To overcome these issues, Fujitsu Laboratories has developed a completely new circuit design by using digital control techniques that require neither the use of a switch nor the generation of a reference voltage.

Using this design, Fujitsu Laboratories developed an ADC with 6-bit resolution and a conversion rate of 1 Giga Sample per second (GS/s) that has a die area of 0.04mm2—the world's smallest for that performance class—and that consumes 9.9mW of electricity. In addition, by using multi-channel time-interleaved operation(1) to enable high-speed operation, performance levels of several tens of GS/s can be achieved, contributing to major performance enhancements in the systems in which it is installed.

Details of this technology were published at the 2012 International Symposium on VLSI Design, Automation & Test (2012 VSLI-DAT), which was held in Taiwan from Monday, April 23.

Recent advancements in digital equipment have mainly been realized by performance improvements in digital circuits. Information and signals in the natural world, however, exist as analog form, and therefore require an ADC to convert them into digital form for digital processing.

In addition, even if the signals are in digital form, such as is the case with a hard disk drive (HDD), when signals are transmitted at high speeds and high densities, they are distorted, making it difficult to read the original digital value. Therefore, it is becoming increasingly common now to apply digital signal processing to resolve the original digital values by converting the distorted digital signal into digitized value (Figure 1). 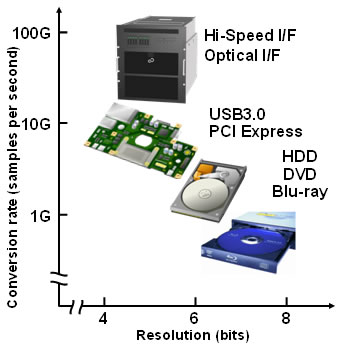 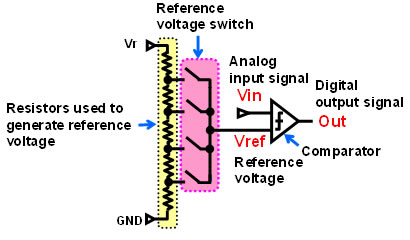 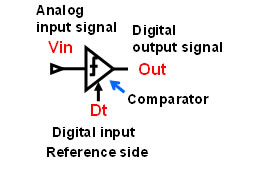 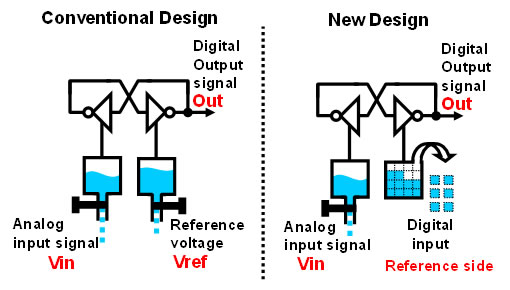 Figure 4: Comparison of the Internal Structure of the Comparators

Using this design technique, Fujitsu Laboratories developed a prototype ADC with 6-bit resolution and a conversion rate of 1 GS/s that has a die area of 0.04mm2—the world's smallest for that performance class—and that consumes just 9.9mW.

This new design reduces the die area and cuts the power consumption by 50% compared to conventional ADCs. This enables compactness and high energy efficiency, even with time-interleaved operations that achieve high-speed performance of several tens of Giga Samples per second (GS/s) in multi-channel time interleaved operation, contributing to major performance enhancements in the systems in which they are deployed.

Fujitsu plans to apply this technology in various ways, including to the backplane interfaces between circuit boards in servers. In addition, while working on applications involving further process scaling, Fujitsu also plans to apply the technology to other analog circuits.