Fujitsu today announced that it has received an order from Naganoken Kyodo Densan Co., Ltd., which acts as an information center within the JA Nagano Group, to build a private cloud ICT platform for the National Co-operatives Operations Center (hereafter the Center).

With the goal of reducing across-the-board ICT system maintenance costs throughout the Japan Agricultural Co-operatives (JA) Group, the Center was established by the Central Union of Agriculture Co-operatives (JA-ZENCHU) to deliver a variety of systems—including Compass-JA, the Group's system for financial accounting, administration, fixed assets, human resources and payroll—as cloud services. JA-ZENCHU has outsourced the development and operation of the Center to Naganoken Kyodo Densan.

By leveraging the Center, the JA Group nationwide will be able to reduce operational costs without having to maintain their own ICT assets.

Presently, systems affiliated with the JA Tokyo Group are scheduled for migration to the Center, and the center will soon begin system operations.

In recent years, the JA Group nationwide has faced a variety of challenges, such as an aging population, a lack of new farmers and difficulties in operating and maintaining ICT systems. As such, there is a pressing need for ways to reduce the total operating costs of ICT environments. As one way to address this need, the JA Group's governing body, JA-ZENCHU, began exploring the possibility of constructing the Center inside one of the JA Group's existing information centers. The purpose of the new center would be to deliver a variety of business systems, including Compass-JA, which is already in use by the JA Group, as cloud services.

JA-ZENCHU has outsourced the development and operation of the Center to Naganoken Kyodo Densan, which possesses an abundance of ICT management and operational know-how, even within the JA Group nationwide, and is fully equipped to handle disasters. Additionally, JA-ZENCHU has decided to build a private cloud environment within Naganoken Kyodo Densan's facilities for the purpose of delivering the JA Group's business systems as services.

JA Tokyo Group, a member of the JA Group, has already decided to use the Center, and will begin operations in April 2012. This move will enable JA Tokyo Group to improve the reliability of its ICT platform while reducing total operating costs. 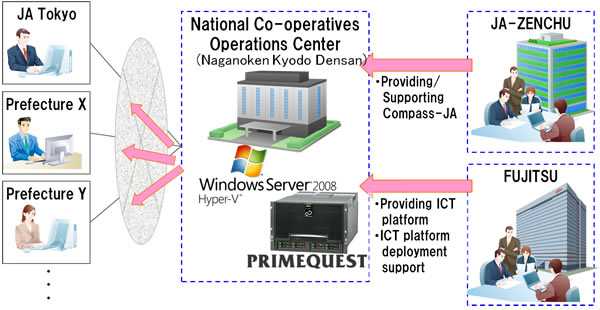 Schematic of the Zenkyo Operations Center

In planning to build and operate the Center, Naganoken Kyodo Densan needed hardware with superior reliability and availability to ensure stable around-the-clock operations 365 days a year with zero downtime.

Naganoken Kyodo Densan wanted to minimize investment in servers in the initial phase of the Center's operations and expand resources as the number of prefectures requesting outsourcing services increased, as outsourcing requests to the Center from other city and prefectural JA Group members are all made on a voluntary basis. Through tests involving a combination of hardware, virtual software, and applications, the company needed to verify whether Compass-JA, which is based on SAP's ERP solution, would run smoothly on the Center's operating environment.

To ensure the reliability of its operations, Fujitsu's PRIMEQUEST mission-critical x86 servers, which are open standard servers that deliver mainframe-class reliability, were selected as the Center's main servers. Moreover, the operations of one city or prefectural JA member can be run on one PRIMEQUEST system board (with built-in PCU and memory), simplifying operational management and conserving space.

To ensure the most effective use of the PRIMEQUEST servers, Windows Server 2008 R2 Hyper-V virtualization software was used, resulting in an ICT platform which enables server consolidation and flexibility in changes to system allocation. This, in turn, allows for system resources to be increased and effectively used as new operational tasks are added or as operational loads increase. In addition, the use of a failover clustering function delivers improved reliability.

Moreover, the virtual environment's ability to run Compass-JA was confirmed during multi-faceted verification testing, which was carried out by the joint verification project run by Fujitsu, Microsoft, and SAP Japan (known as the PRIME 3 PROJECT III(1)).

In addition, by using entry-level PRIMEQUST server models under a one-year rental contract, with new resources to be added as necessary, initial system deployment costs were kept down, resulting in overall cost optimization.

By expanding the usage of the Center in the future, Naganoken Kyodo Densan and JA-ZENCHU will work to reduce total ICT costs and improve operations management for the JA Group nationwide.

Fujitsu will continue to propose ICT technology solutions to support Japan's agricultural sector as a partner to the JA Group throughout the country.