Coordinates servers and air-conditioning systems, reduces total energy consumption up to 40% by employing facility-fans without server-fans

The overall power consumption of container data centers can be effectively reduced by cutting the electricity usage of A/C equipment through external ambient air and other measures. At the same time, IT equipment power consumption can be cut by employing servers that lack internal fans. In the conventional approach to A/C management, A/C systems and servers inside the containers are controlled independently, thereby making it difficult to efficiently cool fan-less servers. By utilizing Fujitsu's newly developed power saving system control technology, which coordinates the operation of servers and A/C systems, it is now possible to employ fan-less servers and achieve across-the-board power saving in container data centers. Prototype models of container data centers equipped with this new technology were able to achieve a reduction in total energy consumption of up to 40%.

In conventional container data centers, data center A/C systems are operated without regard to server temperature information. This has led to unnecessary power consumption resulting from excessive server cooling. It has also been difficult to employ fan-less servers because of situations in which insufficient cooling causes decreased performance or server shut downs due to the overheating protection features of CPUs. 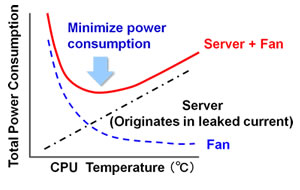 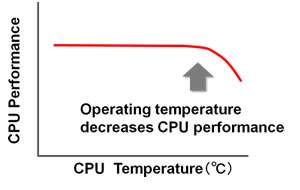 This technology enables the adoption of servers without internal fans, allowing for the overall power consumption of container data centers to be reduced. Figure 3 is a photo of a prototype container data center and figure 4 is a schematic of the container's contents. When the external temperature is between 10°C and 35°C, the container's air conditioning fan takes air through the external intake vent and moves it inside the racks. The warm air from inside the racks is then released from the exhaust vent. When the external temperature exceeds 35°C, an evaporative cooling system cools air to 35°C or below before moving it with the fan. Conversely, when the outside temperature is below 10°C, warm air being released from the racks is passed through a damper and returned to the air intake vent where it is warmed to 10°C or higher before being dispersed by the fan. 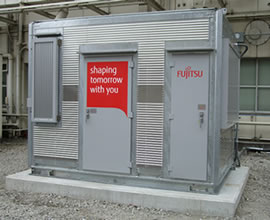 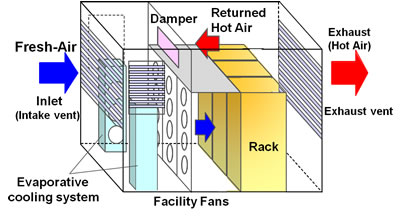 The results of verification testing on this technology prove that energy consumption is reduced by up to approximately 40% compared with conventional container data centers consisting of servers with internal fans (Figure 5).

In addition, even if a CPU's protection features kick in to safeguard against decreased performance or server shutdowns as a result of rising temperatures from sudden increases in CPU load, the technology can rapidly elevate the cooling fan's revolution speed and cool the system in response to the CPU temperature increase. This enables the server to maintain both its service levels and low-power operation. 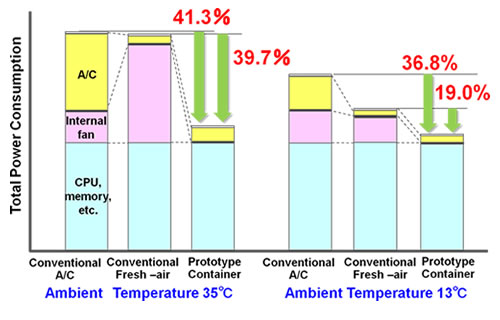 Fujitsu Laboratories aims to employ the technology in commercial applications during fiscal 2012, and will move forward with tests using prototype container data centers in environments with varying temperature and humidity. In addition to optimizing its control algorithms, the company will continue to develop advanced power conservation system control technologies, such as predictive control technology that performs optimal control by anticipating servers' computational loads based on delivered services.