Fujitsu Laboratories today announced that it has developed the world's first technology to minimize video quality degradation during video relays. Following due-process consideration, the new technology has been adopted as a "Recommended Practice" of the Society of Motion Picture & Television Engineers (SMPTE)(1), an international professional association establishing standards in the motion imaging industries. Going forward, the adoption of video transmission systems that adhere to this Recommended Practice will make possible even higher quality video content.

Conventionally, to broadcast news reports, sports and other events, weather forecasts, and other on-site relays, video is transmitted across multiple relay points. Every time video signal passes through the video encoders installed at each of the relay points, slight degradation occurs in the color component of the image. The accumulation of this degradation has been known to lead to visible color blurring.

The new technology, which is compatible with existing equipment, minimizes the occurrence of color blurring. A paper describing the technology was awarded the SMPTE Motion Imaging Journal Certificate of Merit in 2010. Subsequently the technology was examined by SMPTE due process committees and has been published as SMPTE Recommended Practice RP 2050-1:2012.

For thirty years, Fujitsu Laboratories has pursued research and development in the area of video encoding technology. The results of these R&D efforts have been adopted in international video encoding standards, including MPEG-2, MPEG-4, H.264/AVC, thereby helping to enhance performance and quality. Moreover, Fujitsu has also developed industry-leading high-definition video encoding commercialization technology that has been used to enhance the quality of a wide range of video-related products, such as peripheral devices, video encoders, and software. In particular, the IP Series of high performance media encoders, which Fujitsu has brought to market, has been recognized for its high image quality and is currently employed by broadcast networks across the world for transmitting a variety of video elements.

Adoption as a Recommended Practice by SMPTE

Established in 1916 and boasting a history of nearly one hundred years, SMPTE is recognized as the most authoritative body for developing global technology standards for motion imaging industries. A paper describing Fujitsu Laboratory's technology for minimizing video quality degradation during multiple stage video relays —a worlds' first— was awarded the SMPTE Motion Imaging Journal Certificate of Merit in 2010. Subsequently the technology was examined by SMPTE due process committees and has been published as SMPTE Recommended Practice RP 2050-1:2012.

During video relays of footage such as news reports, sporting events and other kinds of events, and weather forecasts, communications satellites and networks such as land-based wireless networks and the Internet are generally employed. Because of the high frequency in which such video relays are repeatedly reused for different programs and media, there has a need for high-quality video to be transmitted at a relatively low rate of around 10 MB/sec. On-site video transmission usually involves setting up around five different relay points, and when video is repeatedly transmitted between these relay points, the eventual occurrence of visible color degradation has become a considerable challenge (Figure 2).

In order to lower any potential hurdles to adoption so that the industry can quickly enjoy the benefits of the newly developed technology, it includes the following two features:

Designing the new technology with an emphasis on compatibility with existing equipment makes it possible for companies to gradually adopt the new technology. Degradation resulting from the halving and doubling of video color components falls roughly into two categories: 1. Color blurring resulting from the degradation of color details; and 2. Color displacement resulting from the misalignment of an image's brightness and color components. Color component shrinking and expansion used in existing video encoder devices are often plagued by color blurring. Although research has been done on the "perfect reconstruction condition" in which images can be shrinked and expanded without degradation, it has been impossible to commercialize such technology because of the unavoidable color displacement that occurs when connecting it to existing video encoders.

By mathematically formulating the necessary requirements and seeking an optimal solution, however, Fujitsu Laboratories has developed the world's first technology for shrinking and expanding color components that can simultaneously minimize color degradation and color displacement. Just by using a video device that employs the new technology, it is possible to minimize color blurring, even after repeated video relays, and color displacement does not occur when connected to existing equipment (Figure 4). 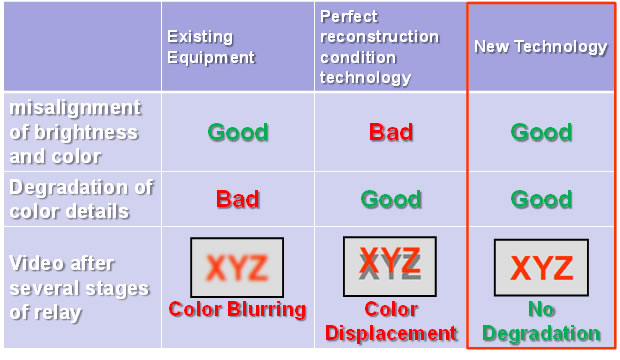 2. Video encoders can be retrofitted at a low cost

The new technology can be used to inexpensively retrofit the shrinking and expansion processing components of video encoders.

By equipping video encoders with the new color degradation minimizing technology, which was adopted as a SMPTE Recommended Practice RP 2050-1:2012, it is possible to inexpensively build a high-definition video transmission system that minimizes color blurring, even after repeated video relays (Figure 5). Increased adoption of the technology going forward enables general viewers to enjoy even higher quality video.

Moreover, in instances where minor color component incongruity is acceptable, such as in relay monitoring applications for checking whether video is accurately being received, it is possible to operate mixed environments combining both existing equipment with video encoders retrofitted with the new color degradationminimizing technology. This enables companies to effectively leverage existing equipment when building a multi-stage video relay system. 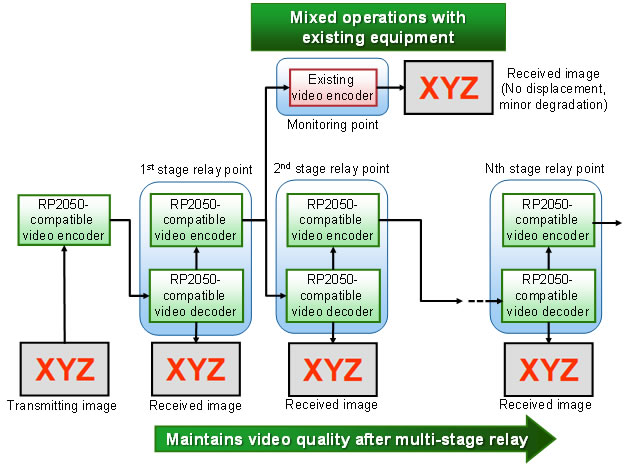 The color degradation minimizing technology has been incorporated into Fujitsu's IP Series of media encoders (IP-900, IP-9500, IP-9610), which are already widely used by customers. With the adoption of the technology as an SMPTE Recommended Practice, Fujitsu will strive to further expand its usage. 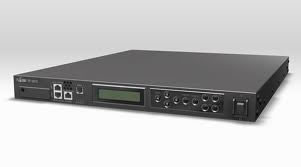