Fujitsu today announced that it has completed construction of the new supercomputer, nicknamed Oakleaf-FX, for the Supercomputing Division of the University of Tokyo's Information Technology Center (SCD/ITC). The new system will begin operations from today.

The new Oakleaf-FX system, which employs Fujitsu's PRIMEHPC FX10 supercomputer, is one of the few petaflops-class(1) systems in the world and achieves high energy efficiency, as low as 1.4MW for overall system power consumption.

Oakleaf-FX has been installed at the Second Research Complex, Kashiwa Campus, The University of Tokyo, located in Kashiwa, Chiba Prefecture. In addition to contributing to SCD/ITC's cutting-edge research in a wide range of scientific and technological fields, the new system will be used in High-Performance Computing (HPC) education at both the undergraduate and graduate levels. As a result, it is expected to help train the next generation of leaders in the field of computational science.

Background to the Deployment of the New Supercomputer

SCD/ITC was established in 1965 as a large-scale computer center for shared use by researchers in Japan, and has been operating under its current name since 1999. The center has been contributing to advanced research using supercomputers in science and technology, and is used by more than 1,500 researchers inside and outside of the university. To meet the needs of an increasing number of diverse users and to handle large-scale applications, the University of Tokyo selected PRIMEHPC FX10 for its high compatibility with the K computer(2) supercomputer. Moreover, as the need is higher than ever for superior energy efficiency that can keep up with today's energy requirements, the PRIMEHPC FX10 is unique in its energy-efficiency performance, which was able to successfully meet SCD/ITC's requirement for system-wide power consumption of 1.4MW or less.

Overview of the New Oakleaf-FX System 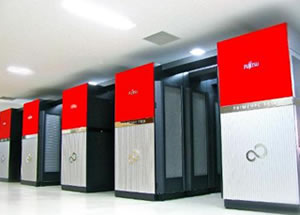 The calculation nodes of the new Oakleaf-FX system use a PRIMEHPC FX10 configuration comprised of 4,800 nodes (50 racks).

Oakleaf-FX is slated to be used in a wide range of scientific and technological areas, including earth science, astrophysics, seismology, weather modeling, materials science, energy, biology, hydrodynamics, and solid-state physics.

Through Oakleaf-FX, SCD/ITC will pursue a variety of advanced research and development initiatives led by researchers inside and outside of the university, as well as promote the training of the next generation of leaders in the field of computational science.

As a core facility of Japan's HPC industry, in addition to advancing SCD/ITC's efforts, the system will be used to develop application software and enhance user services in anticipation of future exascale computing systems.

With the new system, Fujitsu will also play a role in SCD/ITC's activities, while leveraging the company's extensive product lineup, robust service framework, and over thirty years of HPC support know-how to provide comprehensive support in all areas of R&D and analysis work.

The PRIMEHPC FX10 supercomputer system (Oakleaf-FX) will contribute to advancements in various types of research and development activities by users from both academia and industry. Oakleaf-FX will be used for the HPC education program in the Graduate School of the University of Tokyo for future computational scientists. Oakleaf-FX will be operated so that priority is given to larger-scale jobs. Furthermore, a new project, called "Large-Scale HPC Challenge" is also starting. Members of a group whose proposal has been accepted can occupy all computing nodes (4,800 nodes, 1.13 PFLOPS) of the FX10 system for 24 hours. One proposal is selected per month.