National Hospital Organization (NHO) Nagasaki Medical Center and Fujitsu today announced the commencement of full-scale operations of a jointly constructed information backup system intended to ensure the continuity of medical care in the Nagasaki region even in the event of a disaster.

This new backup system employs Fujitsu's private cloud-based Human Bridge BCP(1) Disaster Prevention Solution for medical institutions, which enabled the completion of construction just one month after work began. Nagasaki Medical Center is now maintaining data from its electronic medical record (EMR) system and medical administrative accounting information system online through the new system, which is housed in a highly secure remote datacenter. In addition, because the new solution is equipped with EMR reference-viewer software, clinical data can be readily accessed by evacuation centers or other medical institutions during emergencies, enabling the swift delivery of medical care. Care provided by these outside institutions can also be recorded by using a built-in memo function.

By constructing the new backup system, which includes a highly reliable, high-performance datacenter, the Nagasaki Medical Center has, in a relatively short period of time, successfully created a healthcare environment offering higher standards of safety and security.

Nagasaki Medical Center, a comprehensive and advanced medical facility, is the largest hospital in Nagasaki Prefecture. The facility accepts patients from outside the prefecture, as well. The annual inpatient count is over 12,800, while the number of outpatients per day has climbed to roughly 800. In order to adequately carry out its role as the core hospital for this region, the Nagasaki Medical Center is active in its use of ICT, employing an EMR system and participating in a regional medical coalition known as the Ajisai Network to increase both the speed and efficiency of medical care. The center has also been investigating the development of strategies intended to avoid the risk of losing all of its clinical data in the event that internal hospital systems are destroyed in a disaster, while also arranging for the continuity of medical services by ensuring that other medical facilities or evacuation centers can reference medical data in an emergency.

Fujitsu, which was responsible for the construction, operation and maintenance of an EMR system for Nagasaki Medical Center in 2004, and which also provides support to the Ajisai Network, proposed the construction of a backup system on Fujitsu's datacenter platform based upon its track record in BCP measures for corporations and other institutions. 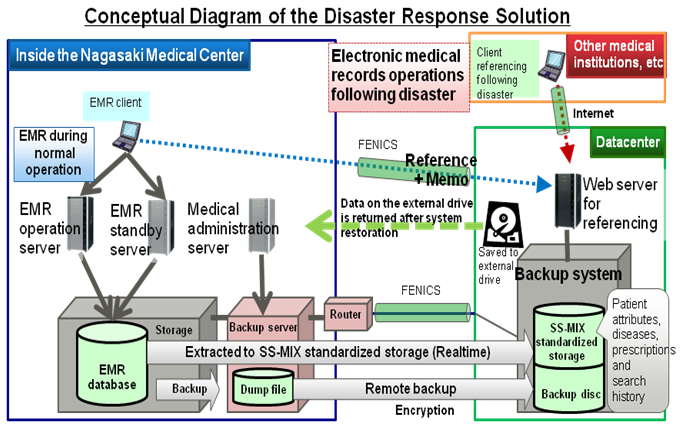 This new backup system is built on Fujitsu's data center platform, which is equipped with advanced network technology and highly reliable security features to respond to all emergencies. The system performs operational management non-stop 24/7 throughout the year. Clinical data from the Nagasaki Medical Center's EMR system is extracted in real-time, compiled into a data format based on the SS-MIX(2) standardized electronic medical record form, and then safely stored in the backup system within the datacenter. At the same time, backup data from the EMR system and the medical administration accounting information system is transmitted to the datacenter once per day.

In situations where the Nagasaki Medical Center's EMR system cannot be accessed, doctors and nursing staff can gain patient consent to reference clinical data stored in the datacenter via an authentication process using an Internet-connected computer. Apart from referencing past data, these outside institutions can also record the treatment they have provided using a built-in memo function. Past clinical data and other fundamental information (such as blood type, medical history, allergy information, etc.) can be easily referenced to help doctors, nurses, and other staff coming in to assist from other regions provide medical care based on reliable reference data.

After the ICT infrastructure inside the Nagasaki Medical center has been reconstructed, backup data from the datacenter will be returned to the EMR server, effectively enabling full system recovery. Medical records that are entered using a memo feature following a disaster can be referenced from the EMR system as "medical records from the time of the disaster."

In its role as a core hospital, the Nagasaki Medical Center will continue to promote the enhancement of regional medical care as a whole as it deepens its cooperation with other regional medical institutions in order to provide superior medical services.

The HumanBridge BCP Solution used in this system provides for SS-MIX standardized storage, which has become a standard in the field of medical information. This means it can be adopted without confusion resulting from different EMR formats. By utilizing this solution, the backup system could be expanded to become a backup system for medical institutions in the entire region, not just for Nagasaki Medical Center alone.

Leveraging its experience and know-how in constructing and operating EMR systems and regional medical networks throughout Japan, Fujitsu is committed to providing consulting, system construction and operational support services to optimize ICT environments that raise the quality and reliability of medical care.