Fujitsu today announced the development of BroadOne LTE Femtocell, a compact indoor base station for the easy construction of high-bandwidth, high-quality indoor wireless communications environments. Sales of the new product, geared toward mobile communications providers, will start today. BroadOne LTE Femtocell deploys unique interference control technology that reduces signal interference between outdoor macrocell base stations and the femtocell, thereby enabling high-quality communications. Moreover, by simply connecting the device to a broadband connection, it can be used immediately, without having to perform initial configuration, for the connection of up to eight handsets. In addition, because it allows for seamless switching between LTE and Wi-Fi, the new device delivers improved user convenience and an enhanced user experience. 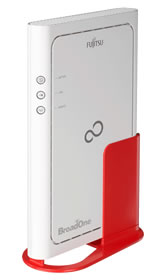 The popularity of smartphones and tablet devices has led to a sharp increase in the volume of data sent and received among users. As a result, mobile communications providers have faced an urgent need to augment their wireless communications bandwidth. To increase wireless communications capacity, providers will have to take necessary steps such as improving the efficiency of wireless bandwidth through the deployment of LTE services, expanding the frequencies available to them by switching to wireless wideband, and offloading wireless traffic through Wi-Fi, in addition to taking a small-zone approach that reduces the geographic range covered by a single base station to allow for higher-capacity and higher-quality mobile bandwidth. Furthermore, in the case of high-speed data communications, as user satisfaction is contingent on the quality of the user experience, it is often necessary to construct high-speed communications environments for indoor environments that experience heavy traffic loads.

With Fujitsu's newly-released compact indoor base station, BroadOne LTE Femtocell, by simply connecting the device to a broadband connection, it can be immediately employed for the connection of up to eight handsets without requiring initial configuration.

When installing the LTE Femtocell, there is no need for mobile carriers to adjust the settings in their outdoor macrocell base stations because the LTE Femtocell itself includes technology that reduces interference. In addition, as BroadOne LTE Femtocell allows for seamless switching between LTE and Wi-Fi, it helps deliver an improved user experience and contributes to reducing installation and operational costs of mobile communications providers.

With the LTE Femtocell as one of its wireless broadband solutions, Fujitsu is working to develop its business in global markets.