Fujitsu Limited and Kakogawa City Hospital Organization today announced the creation of a new HR and payroll administration system using IPKNOWLEDGE, Fujitsu's internal data consolidation solution for public sector institutions. Kakogawa City Hospital Organization is a local independent administrative institution(1) formed through the merger of the former Kakogawa Municipal Hospital (a public hospital with 405 beds) and the former Shinko Kakogawa Hospital (a private hospital with 198 beds). The merger, through which the legal status of the merged entity was converted into an independent administrative institution, was designed to create an independently managed public hospital. IPKNOWLEDGE enabled the personnel data of the two hospitals to be consolidated within a time frame of six months to create a new HR and payroll administration system.

Kakogawa City Hospital Organization, which completed its conversion to become an independent administrative institution, was able to improve efficiencies in its HR and payroll administration by using IPKNOWLEDGE, thereby reducing the amount of time it spends on such tasks without disrupting the provision of medical care to local residents.

Fujitsu is leveraging the expertise it has accumulated with local governments and independent administrative institutions to provide consulting, system configuration, and operational support services to optimize ICT environments and make operations more efficient.

Effects of Deploying the IPKNOWLEDGE HR and Payroll Administration System

As Kakogawa City had already deployed the IPKNOWLEDGE HR and payroll administration system previously, the system can be used by HR and payroll staff at Kakogawa City Hospital Organization without the need for any special training. With the IPKNOWLEDGE HR and payroll administration system, basic data is consolidated in a single database and the data revision process is streamlined by alleviating the need to make changes to multiple tables when modifying HR data for a single person. As well, the new system has led to shorter payroll calculation times, resulting in substantial improvement in the efficiency and speed of HR and payroll operations. 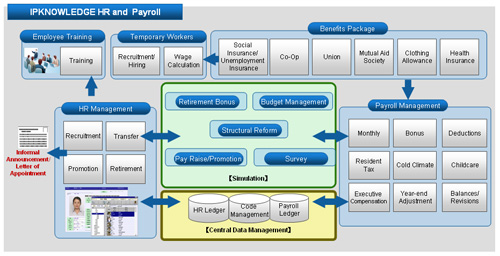 In order to continue offering sufficient local healthcare services, Kakogawa City Hospital Organization will employ the IPKNOWLEDGE HR and payroll administration system to foster an environment for maintaining the organization's capabilities as a regional medical center and its managerial independence. This will be enabled through initiatives such as a scheme for managing payroll expenses that can flexibly accommodate variable employment terms for doctors, nurses, and staff. 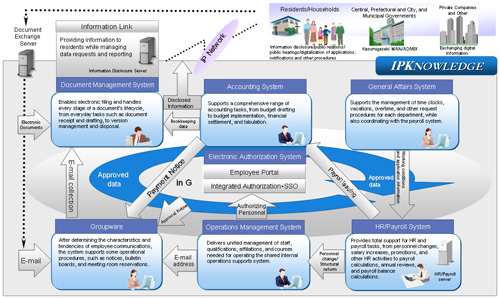