With the new technology, a wide range of data—including the power consumed by each office and residence, as well as the usage patterns and charge levels of decentralized energy storage devices installed at such locations—is collected in the cloud. By enabling cloud-based integrated control of energy storage devices, peak power demand can be effectively reduced. Because the system can plan a recharging schedule that takes into consideration multiple versions of demand forecasts and user usage, it can handle a wide range of power demand fluctuation without loss of usability.

During a test study in which the technology was put into use to control the electricity consumption and recharging of batteries installed in a large number of notebook PCs dispersed around an office, the technology succeeded in reducing the peak power demand of the entire office by approximately 10% (*1). Going forward, Fujitsu aims to deploy the technology in smart cities to help bring about the creation of societies that are better able to supply their own energy needs.

To address power supply shortages resulting from the impact of the Great East Japan Earthquake, revisions were made to Japan's energy conservation regulations, moving away from an emphasis on reducing overall power demand to efforts that reduced peak power demand. This, in turn, has led to expectations of the increased use of solar power generation and energy storage devices. In the smart cities of the future, it is thought that numerous energy storage devices will be placed in a wide range of locations, such as buildings and households. At the same time, it is anticipated that there will be greater need for a mechanism to enable peak power demand reduction and demand balancing by charging energy storage devices during times of low power utilization and utilizing the stored energy when power demand is high.

When actually deploying the technology in smart cities, control for the electricity consumption and recharging of energy storage devices will take place in communities such as offices inside a building, residential neighborhoods, and commercial districts, and peak power demand will be cut in a staged manner throughout a smart city (Figure 1). However, for office buildings, residential areas and small-scale communities, power consumption will vary significantly depending on the number of users and electronic devices utilized, making it difficult to accurately forecast such fluctuations. In addition, it will be necessary to prevent peak power demand from increasing due to overlapping charging times for energy storage devices, to ensure that the battery lives of energy storage devices are not shortened because of wasteful consumption-recharging cycles, and, when power outages actually do occur, that there be a sufficient amount of power remaining. A consumption-recharging schedule, therefore, will need to take into consideration the wide range of ways in which energy storage devices are employed by users, as well as the lifespan of such devices. 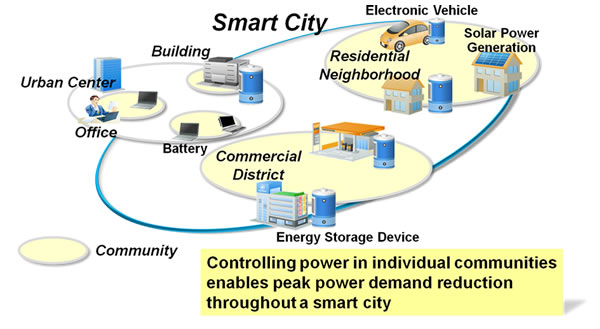 Fujitsu Laboratories developed this technology to control the electricity consumption and recharging of energy storage devices. By forecasting power demand in a way that takes into consideration the unique characteristics of each community, the technology reduces peak power demands without restricting usability. As a result, peak demand reduction can take place while efficiently leveraging the decentralized energy storage devices installed within a community. Key features of this technology are as follows.

Fujitsu recently conducted a test study in which an office represented a single community in a smart city. By using the internal batteries of notebook PCs to represent decentralized energy storage devices throughout a community, the test demonstrated the reduction of peak power demands for the entire office (Figure 2). During the test, a variety of data—including the office's power utilization, battery levels of the notebook PCs, and individual users' usage habits—was collected over a network in the cloud. Forecasts were made for power demand inside the office based on this collected data, and a schedule was created for using and recharging each PC battery in a manner that would reduce the office's overall peak power demand. These schedules were subsequently sent to each of the PCs. A number of countermeasures were also implemented from the cloud, including increasing the battery levels of notebook PCs of users who are frequently out of the office to ensure that their batteries do not die while on-the-road and taking measures to ensure that the selection of notebook PCs to run on batteries is not skewed, to avoid having only selected batteries deteriorate very rapidly. 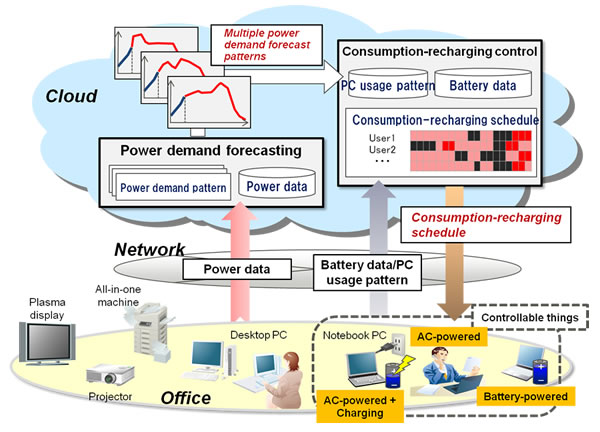 In a test study employing some of the notebook PCs in a Fujitsu office with forty employees, the company was able to demonstrate the reduction of peak power demand. In light of these results, after simulating the integrated control of all forty of the office's PCs, Fujitsu was able to confirm a reduction of approximately 10% (Figure 3). 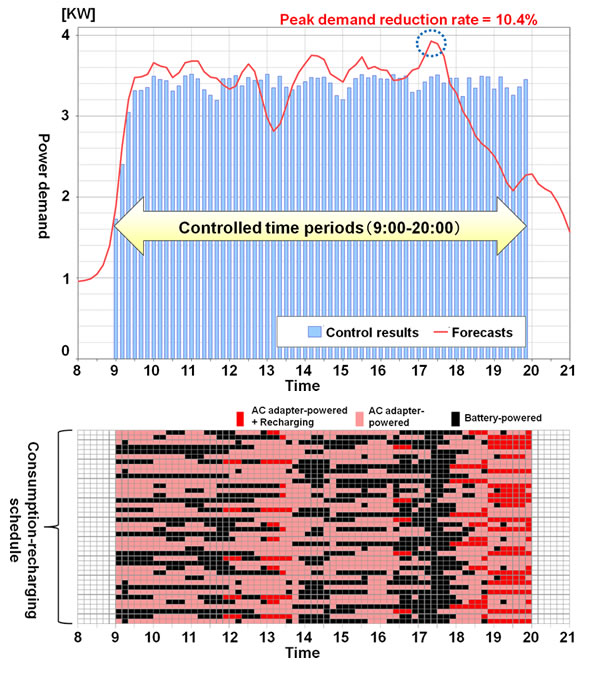 Going forward, Fujitsu plans to continue demonstrating this peak power demand reduction technology through both internal and external field testing. Furthermore, Fujitsu plans to pursue R&D on peak power demand reduction technology featuring power demand forecasting and consumption-recharging control that take into consideration the attributes of various communities, including factors such as the characteristics of energy storage devices installed in smart cities and power transmission and distribution patterns. Through these and other initiatives, the company aims to help bring about a society that can sustain its energy needs.