Fujitsu today announced the global availability of the PRIMEHPC FX10 supercomputer, which is capable of scaling to a top theoretical processing performance of 23.2 petaflops(1) (PFLOPS).

Combining high performance, scalability, and reliability with superior energy efficiency, PRIMEHPC FX10 further improves on Fujitsu's supercomputer technology employed in the "K computer," which achieved the world's top-ranked performance(2) in June 2011. All of the supercomputer's components—from processors to middleware—have been developed by Fujitsu, thereby delivering high levels of reliability and operability. The system can be scaled to meet customer needs, up to a 1,024 rack configuration achieving a super-high speed of 23.2 PFLOPS.

By leveraging the new system, it will be possible to address societal challenges—including new drug development, disaster prevention, disaster mitigation, and other measures, to bring about a safe and secure society—and to pursue cutting-edge research, such as enabling the development and manufacturing of new materials without the need to make prototypes. This has the potential to help companies enhance their competitive edge.

In offering a high-performance and high-quality system on a global scale, Fujitsu aims to help expedite the academic research and product development of customers throughout the world. 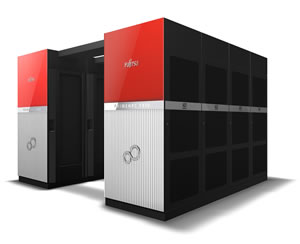 Recently, computer simulations have been employed in a wide range of applications, from basic research at universities and research institutions to corporate product development. Going forward, it is expected that such simulations will be leveraged to address problems facing society, such as drug discovery and medical research, analysis of earthquakes and weather phenomena, and development of new sources of energy. As a result, supercomputers, which serve as a platform for enabling computer simulations, are steadily increasing in performance and scale. In particular, in the area of high-end supercomputers, petaflops-class performance is in great demand.

To meet such needs, Fujitsu has developed PRIMEHPC FX10, a supercomputer capable of world-class performance of up to 23.2 PFLOPS. The new system will be available worldwide.

The new system is highly compatible with the "K computer" supercomputer, which is being developed by RIKEN and Fujitsu as part of an initiative led by Japan's Ministry of Education, Culture, Sports, Science and Technology (MEXT). As such, it is optimal for developing software to be used on the K computer.

Fujitsu is aiming to bring about a "Human Centric Intelligent Society" by contributing to a prosperous future for society and customers through the continued development of supercomputers.

1. Delivers a world-class, high-speed, ultra-large-scale computing environment of up to 23.2 petaflops

In its largest potential configuration consisting of 98,304 nodes, 1,024 racks, the supercomputer delivers a high-speed, ultrascale computing environment with a theoretical computing performance of 23.2 petaflops and 6 petabytes of memory.

PRIMEHPC FX10 runs on the newly-developed SPARC64™ IXfx processors, which offer a very significant boost in performance over the SPARC64™ VIIIfx processor on which they are based and which power the K computer. Each processor has 16 cores and achieves world-class standalone performance levels of 236.5 gigaflops and performance per watt of over 2 gigaflops.

PRIMEHPC FX10 features a variety of enhancements for high-performance computing, such as high memory bandwidth, scalable "Tofu" interconnects with 10 links, each delivering high performance levels of 5 GB/s × 2 (both directions), and Fujitsu's original HPC middleware, Technical Computing Suite, which has a compiler and library, resulting in high execution performance for massively parallel applications.

4. Proprietary reliable technology and high operability for a large-scale system

Due to its processors, which include the same built-in RAS functions found in mainframes, and "Tofu" interconnects, which employ highly-flexible 6-dimensional mesh/torus architecture, PRIMEHPC FX10 delivers high reliability and availability.

50 systems over the next three years.