Fujitsu and Tokyo Denki University today announced that, as part of the establishment of the university's new Tokyo Senju campus in Tokyo, they have collaborated to integrate the ICT platforms from the university's three existing campuses in Tokyo, Saitama, and Chiba. The new system, which will be upgraded to a private cloud platform located at Fujitsu's datacenter, will reduce the number of servers operated by the university by 60%.

As a result, Tokyo Denki University will be able to bring efficiency and stability to the management and operations of its ICT systems, while at the same time equipping it to handle crisis management during emergencies. The university is also launching a new library system that will provide a library e-portal and electronic library this month. At the new Tokyo Senju campus(1), by linking the newly-developed student attendance, classroom, and other management systems with the building's air conditioning system, Tokyo Denki University will be able to conserve energy. The university also plans to open up its library to the local community. Going forward, the university is planning to integrate the management of student IDs, enable an environment that is secure and open to society, and make improvements to its graduate services, among other initiatives. Migration for the system running on the new ICT platform will be gradually completed by March 2012. It is scheduled to begin full operations starting in April 2012.

Since its founding in 1907, Tokyo Denki University has been committed to fostering the development of leaders who contribute to society through technology. Founded on the spirit of respect for practical study and guided by an educational and research philosophy that is based on the recognition that technology reflects the character and ideals of the engineers who create it, Tokyo Denki University has produced generations of engineers with track records of achievements in and outside of Japan. As the core component of the university's activities to commemorate the 100th anniversary of its founding, it will be opening a new campus in the Senju area of Tokyo in April 2012. The aim of the Tokyo Senju campus is to create a new type of learning environment that emphasizes the student experience and embodies the ideals of science and engineering education.

The newly-developed ICT platform will integrate the systems from the university's existing three campuses. There are also plans to employ the platform at middle and high schools affiliated with Tokyo Denki University, in the future.

1. Built as a private cloud with an eye towards operational efficiency and crisis management

Tokyo Denki University has built a private cloud system that upgrades and integrates the ICT platforms from its three existing campuses in Tokyo, Saitama, and Chiba using Fujitsu's highly-secure datacenter(2). This, in turn, will allow Tokyo Denki University to further improve the efficiency of its system operations, in addition to enhancing its disaster response, security, and other business continuity measures. Furthermore, the datacenter's cutting-edge facilities enable a roughly 60% reduction in servers through virtualization technology and annual CO2 emissions are also expected to be cut by 18 tons. 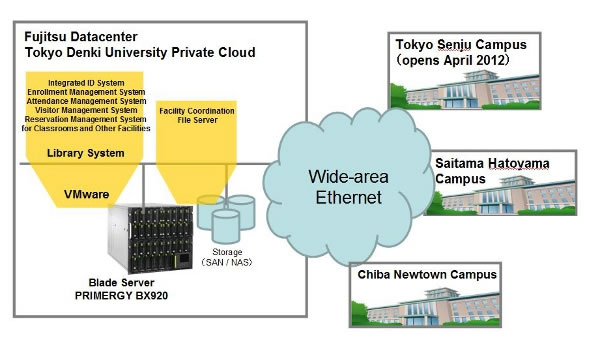 Up until now, each of the school's libraries managed books using a magnetic tape system. By affixing each book with an RFID tag, the new system will make the lending process more convenient for users, while also making it possible to reduce the workload of staff. In addition, book usage information can be efficiently collected, thereby helping to bring about expanded user services. With the new library system's virtual library feature, the system displays an image of the bookshelves of all of the books stored at the three campuses when accessing it through a PC. In addition to displaying the loan status and a cover image of each book, the feature allows users to search for titles as if they were selecting a book from an actual bookshelf. The new system includes additional functionality that links to electronic library services from Maruzen Co., Ltd. and Dai Nippon Printing Co., Ltd., making it possible for users to access e-book content. By connecting the new feature with WebOPAC(3), the system can display search results for both paper and e-books. Both paper and e-books can be checked out, placed on reserve, and returned. Users have the option of borrowing both formats of books, and because electronically-loaned titles are automatically returned once the checkout period expires, users do not need to worry about forgetting to return books, leading to improved service.

The new system also deploys Fujitsu's Ufinity academic portal. Using a special library portal site, students, faculty, and members of the local community can all access a wide range of information from the same portal.

Tokyo Denki University believes that such services, which are specially designed for urban campuses with limited available library space, will provide an environment where students can learn with convenience and peace of mind.

A new system is being built based on Fujitsu's UnifIDone integrated ID management package for universities. This will enable Tokyo Denki University to distribute IDs on a much larger scale than before and flexibly administer them throughout the lifetimes of individuals. The software also provides a unified authentication method for all systems, thereby reducing the burden of managing user authentication.

Beginning fiscal 2012, the university plans to assign a TDU-ID to people affiliated with Tokyo Denki University, including students and faculty; temporary and part-time staff, graduates, library users, and other visitors; as well as business partners and other external vendors. Information about each person will be encoded in the IDs, which will be centrally managed, making it easy to distribute needed ID information to on-campus systems. At the same time, student and faculty IDs, which incorporate smart cards, will also be managed in an integrated manner. This will make it possible for Tokyo Denki University to maintain an open and secure environment that ensures the university's safety, while at the same time actively opening up its libraries to the local community.

Normally, the school issues different unique IDs to entrance exam-takers, current students, and graduates. On the other hand, given the increasing complexity of managing this information, gaining a composite understanding of the information has become a challenge. With the new integrated ID management system, individuals are assigned a single ID throughout their lifetime, thereby enabling efficient administration. This is expected to lead to the delivery of even greater fine-tuned services based on the needs of each student and graduate, in addition to applications for verifying the effectiveness of education.

Fujitsu's RapidWeb+ web system development solution is a package that makes it possible to easily convert a wide range of programs into web systems through simple configuration and templates. As part of the new upgrade, Tokyo Denki University is reducing its development costs by inexpensively, efficiently, and quickly building an integrated web system that incorporates multiple management systems, including enrollment management, attendance management, visitor management, and reservation management for classrooms and other facilities.

5. Contributing to the creation of an "eco-campus"

In conjunction with the building of its new campus, Tokyo Denki University is moving forward on a plan to promote its new Tokyo Senju campus as an "eco-campus" with lower CO2 emissions, starting with its construction. The plan has been praised as an ambitious project to deploy advanced environmental technologies, and it has been selected by Japan's Ministry of Land, Infrastructure, Transport and Tourism as a model project.

For the especially difficult task of managing classroom electricity consumption, Tokyo Denki University is linking its new upgraded system with an attendance management system. This system is designed to promote energy savings by providing sufficient lighting and cooling or heating to only those classrooms that need it, and only during the times they need it, while turning off the electricity in empty classrooms.

In 1907, Tokyo Denki School (the precursor of Tokyo Denki University) was founded as a school of engineers, founded by engineers and for engineers. Small shops and street retailers of electric parts and accessories around the school were grown up, and that cluster is regarded as the origin of "Akihabara Electric Town." Now TDU provides a broad range of academic fields covering most sectors of science and engineering with 5 graduate schools and 5 undergraduate schools. On existing 3 campuses, more than 10,000 students are studying and Tokyo Senju Campus will be newly established in April 2012. Looking ahead to the next 100 years, TDU has been continuously pursuing a new model of university for science and technology.