Fujitsu Laboratories Limited and Fujitsu Laboratories of Europe Limited today announced development of the world's first simulation technology that can instantly test for changes in power consumption throughout a datacenter—where numerous servers are operated—when operating status of servers or air-conditioning equipment is altered.

Datacenters are increasingly used to support business continuity during natural disasters and as a way for companies to save energy—making improvements to the power efficiency of datacenters themselves a major issue. Reducing electricity consumption at datacenters requires an integrated approach that takes into account ICT hardware, air conditioning, and other equipment. In a datacenter with an ever-changing operational profile, however, it is difficult to predict how changes to the operating status of ICT hardware and air conditioning equipment will impact the datacenter's overall power consumption.

Fujitsu Laboratories and Fujitsu Laboratories of Europe have developed technology that can determine thermal flows inside a building at calculation speeds over 1,000 times faster than was previously possible, as well as technology that completely models the ICT hardware, air conditioning and other equipment of a running datacenter. This, in turn, enables accurate calculations of a datacenter's power consumption. The new technology will make it possible to test the effectiveness of energy-saving measures prior to execution in a running datacenter. This has the potential to significantly reduce the overall power consumption of datacenters.

With the emergence of cloud computing and the need for business continuity during natural disasters, companies continue to increase their reliance on datacenters. Due to the greater number of servers required to support this trend and the deployment of higher performance servers, power consumption at datacenters has also steadily increased.

At the same time, server processing loads tend to fluctuate depending on the time of day and season of the year. From an energy-saving standpoint, it makes sense to concentrate computing loads on certain servers while reducing the total number of servers running. In addition, because cooling accounts for roughly 30% of a datacenter's total power consumption, energy-saving measures must take air conditioning equipment into consideration.

Current cooling systems are designed to maintain a fixed room temperature. However, if air conditioning can be properly controlled in response to the operating status of servers, power consumption can potentially be reduced. Linking together the control of servers and air conditioning equipment promises the possibility of cutting overall datacenter power consumption by as much as 40% (Figure 1). 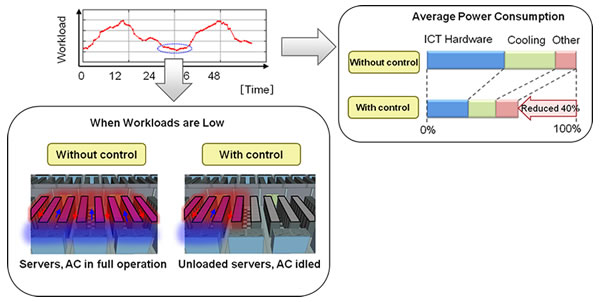 It is impossible to directly perform tests—such as allocating server load or changing the number of running servers in response to fluctuations in processing load, or controlling air conditioning in response to server utilization and temperature—using an actual data center. A promising alternative is to employ computer simulations to check the impact of control measures. At the same time, existing simulation technologies are far too slow, making real-time testing impossible.

For thermal-flow simulations, which analyze the flow of heat within a building, a reduction of the number of required calculations has been accomplished by automatically extracting temperatures and flow patterns in advance, resulting in a thousand-fold increase in computing speed (Figure 2). 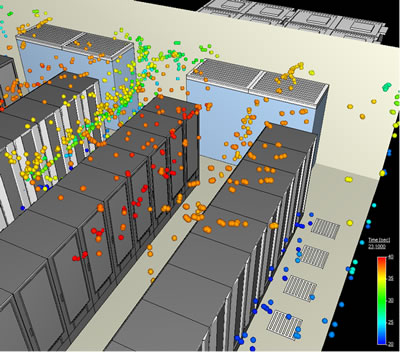 Modeling all electrical and thermal flows, including ICT hardware, air conditioning equipment, and power supplies, led to an accurate simulation of the power consumption of an entire datacenter with a margin of error of less than 5% (Figure 3).

This technology makes it possible to accurately simulate the effects that power-saving measures will have on a datacenter as a whole—something that has been difficult to verify using actual operating datacenters. For example, this makes it possible to test a number of strategies, such as concentrating processing loads on servers in a fixed area when demand is low, while at the same time cutting off power to other servers and reducing air conditioner output. By implementing the most efficient measures, significant improvements in datacenter power efficiency can be expected.

The new technology also makes it possible to take into consideration the climate conditions (temperature and humidity) at a datacenter's site and examine the cooling methods most suited to the location. In colder climates, it may be effective to employ a method that draws outside air directly into the building. As long as the temperature and humidity stay within a range that ensures reliable server operations, cooling with outside air uses less power than air conditioning.

In addition, recent power shortages in Japan have forced datacenters to deal with emergency energy-conservation requirements. This technology also enables a variety of measures to be tested on short notice.

The technology will undergo field testing and application at Fujitsu's datacenters with the goal of making datacenters more power-efficient.

Fujitsu Laboratories Limited has had an active presence in Europe since 1990, forming Fujitsu Laboratories of Europe Limited (FLE) in 2001. The company's groundbreaking work is closely aligned to the future needs of the business community, focused on making future technologies a reality for today's businesses. FLE aims to shorten the R&D cycle to put cutting edge technologies into customers' hands as quickly as possible, enabling businesses to gain a tangible competitive advantage. Close collaboration with leading academics and experts Europe-wide forms a central element of FLE's approach, ensuring the effective pooling of expertise with other pioneers in any given field of research. FLE also participates in a number of EU research initiatives, bringing together the joint expertise of industry and academia to accelerate the development and use of new technologies on a pan-European basis.
For more information, please see: www.fujitsu.com/emea/about/fle/