Circuit size and energy requirements both reduced by approximately 85%, marking a big step forward toward performance boosting of ultrafast transmissions at 100 Gbps and beyond.

Fujitsu Limited, Fujitsu Laboratories Limited and Fujitsu Research and Development Center Co., Ltd. of China jointly announced their development of a digital signal processing algorithm to compensate for waveform distortions in signals transmitted by fiber-optic cables in long-haul transmission systems of 100 km or more. Compared to conventional technology in widespread use in literatures, the size and power requirements of the new circuit are reduced by approximately 85%, and are reduced by approximately 50% compared to circuits previously developed by Fujitsu(1).

For long-haul transmission systems that are used in the trunk-line networks of telecom carriers and networks that tie together large datacenters, the new circuit will enable ultrafast transmission systems operating at over 100 Gbps per wavelength to be more compact and consume less power than existing systems.

By enabling a tenfold or more increase in the capacity of networks, most of which now operate at 10 Gbps, the new circuits will usher in the ultrafast networks—able to handle extremely large volumes of data—that will underpin the next generation of smartphones and cloud services.

Some of this research was conducted as part of the "Universal Link Project R&D" sponsored by National Institute of Information and Communications Technology (NICT)(2), Japan. Details of this technology are being presented at the 37th European Conference and Exhibition on Optical Communication (ECOC2011), opening September 18 in Geneva.

As the volume of data transmitted over the internet grows with the widespread use of smartphones and the development of cloud services, the trunk-line networks operated by telecom carriers and the networks that tie together large-scale datacenters are being called upon to carry more bandwidth at lower cost and greater efficiency. Wavelength division multiplexed (WDM) fiber-optic transmission systems that can carry 100 Gbps per wavelength—more than ten times existing levels—are expected to go into volume commercial deployment around 2012, and R&D efforts are progressing to enable continuous capacity increases in the future.

When transferred over long distances of hundreds of kilometers by fiber-optic lines, ultrafast signals carrying data at speeds of 100 Gbps or more suffer from waveform distortion caused by nonlinear optical effects(3), making it difficult for the signal to be correctly received. This has prompted research into nonlinear compensation technology(4), which can restore the signal received with distortion to a clean waveform. Using conventional methods, however, the implementation of nonlinear compensation technology would require massive circuits with more than 100 million logic gates, and chips that include such compensation circuits are only expected to become feasible around 2020. Reducing the scale required of such circuits, therefore, has been a pressing issue.

In September of last year, Fujitsu developed a technology that would dramatically simplify these circuits, making them commercially viable as early as 2015. With the relentless growth in network traffic, however, ongoing improvements, in terms of circuits that are more compact and consume less electricity, are still needed.

The Fujitsu team has now developed a new signal-processing algorithm that, while retaining the distortion-correction performance of the technology developed last year, slashes the number of stages(5) required in a distortion-compensation processing circuit to about one-seventh current typical levels (and about half the level of Fujitsu's previous technology). Key features of this technology are as follows. 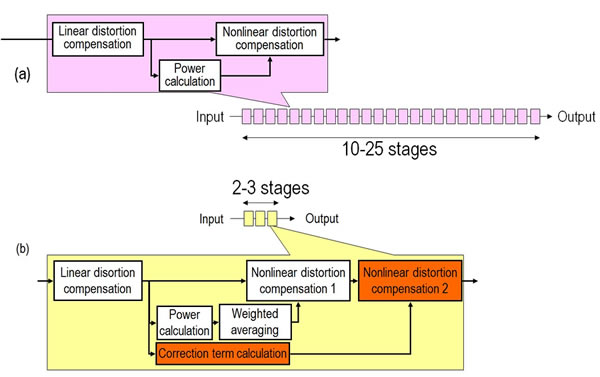 Figure 2. Block diagrams of compensation circuits in conventional technology (a) and the new technology (b).

In a transmission test at 112 Gbps over 1,500 km, the new technology was shown to achieve using a 3-stage circuit the same signal quality that conventional technology achieves using a 20-stage circuit, a reduction in required circuit stages of approximately 85% (see Figure 3). Because the circuit is much smaller in size, it also has greatly reduced power requirements. If the new technology were applied to the same number of circuit stages used in conventional technology, signal quality would be even higher, so it could also be used to extend transmission distances.

An ultrafast fiber-optic network using this technology could be built at lower cost, with lower energy demands. Such a network would enable the delivery of new services, which require the exchange of enormous data volumes that far exceed current levels, in the next generations of smartphones and cloud services. 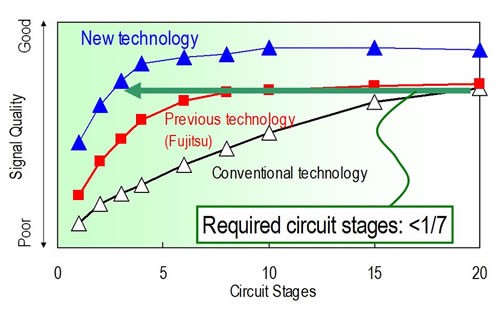 This technology is expected to be used in the next generation of long-haul optical transmission systems running at speeds in excess of 100 Gbps that are on track for implementation by around 2015. The technology is also being studied for potential applications in high-capacity short-range networks, such as those used in datacenters and access networks.