Fujitsu Laboratories Limited today announced the development of a compact silicon photonics light source(1) for use in optical transceivers(2) required for optical interconnects capable of carrying large volumes of data at high speeds between CPUs. In the past, when the silicon photonics light sources built into optical transceivers, and the optical modulators(3) that encode data into the light emitted from the light source experienced thermal fluctuations, a mismatch between the lasing wavelength of the light source and the operating wavelength of the modulator could arise, causing concern that the light would not carry information. This is why thermal control has become indispensable as a way to maintain operating wavelengths that consistently match. By introducing a mechanism that automatically keeps the light source's wavelength and the modulator's operating wavelength in sync, Fujitsu Laboratories has obviated the need for a thermal control mechanism, allowing for the device to be smaller and more energy efficient.

This technology enables compact, low-power optical transceivers to be mounted directly in CPU packaging. Through its application to optical interconnects between CPUs for exaflops-class supercomputers(4) and high-end servers, the technology paves the way for super-high-speed computers.

Details of this technology were presented at the 8th Group IV Photonics international conference (GFP 2011), running September 14-16 in London.

In recent years, the performance of supercomputers has been roughly doubling every 18 months. Right now, work is underway to produce exaflops-class supercomputers with a target date around 2020. Realizing these ultrafast computers will require high speed, large-capacity interconnects that allow individual CPUs to transfer data to each other at tens of terabits per second. But the existing electrical interconnects based on copper wire are thought to be approaching their speed limit. This has spurred investigation into optical interconnects between CPUs.

Much effort has been devoted to research and development on optical transceivers, which use silicon photonics technology as a step toward implementing large-capacity optical interconnects between CPUs. The use of silicon photonics technology allows for the optical transceivers to be miniaturized and therefore, to be densely integrated near CPUs. Also, because they use silicon semiconductor manufacturing technologies, it should be possible to produce them in large volumes and at low costs. 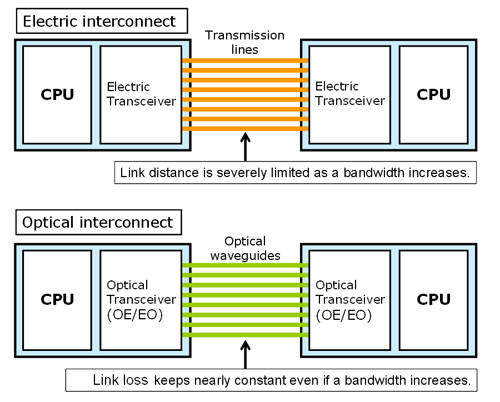 The transmitter component of an optical transceiver comprises a light source and an optical modulator that encodes data into the light emitted by the light source. A good candidate for the optical modulator is a ring resonator(5), as it is compact and energy efficient. But because the optical transceiver is located near the CPU, the lasing wavelength and the operating wavelength of the ring-resonator-based optical modulator do not coincide with each other due to heat from the CPU, leading to information not to be encoded in the light. A thermal control mechanism is needed to ensure that they match exactly, which, however, is an obstacle to making the transceiver simple, compact and energy efficient.

About the Newly-Developed Technology

The sizes of the ring resonators introduced into both the light source and the optical modulator are exactly the same, so that shifts in the light source's lasing wavelength and the optical modulator's operating wavelength caused by CPU heat should match. This obviates the use in the thermal control mechanism that is otherwise required by the existing technology, enabling the optical transceiver to be made more compact and energy efficient. The transmitter component can be shrunk to less than 1 mm in length. Arraying these in a row should realize an optical transceiver for a large-capacity optical interconnect that is small enough to be mounted on a CPU module.

This technology is a stepping stone toward the future of exaflops-class supercomputers and high-end servers that use large-capacity optical interconnects on a large scale and with low energy requirements.

Fujitsu Laboratories plans to continue the development of optical transceivers for large-capacity interconnects by integrating this light source technology.