A compact water-resistant smartphone designed for both convenience and functionality

Fujitsu today announced that its new docomo F-12C Smartphone will be available from NTT DOCOMO, Inc. beginning August 7, 2011, in Japan.

F-12C features "human-centric technology" that has been cultivated by Fujitsu during the development of its previous mobile phones and delivers the ultimate level of convenience. In addition, as the smartphone has been built to Japanese specifications, it offers fine-tuned usability.

F-12C has been designed in collaboration with the luxury luggage brand GLOBE-TROTTER, a purveyor to the British Royal Family, creating a smartphone with polished user-friendliness and a universal style design. The smartphone, is equipped with the latest Android™ OS 2.3 release and boasts a lightweight, compact body that fits comfortably in the palm of the user's hand. It also features IPX5/8 water-resistant(1) technology, pioneered by Fujitsu.

Amidst the rapid market shift to smartphones, Fujitsu has developed F-12C as its first smartphone handset to incorporate "human-centric technology," which enables the same easy-to-read, easy-to-hear, and easy-to-use functionality that Fujitsu has built into its previous mobile phones for user-convenience.

In terms of viewability, the F-12C features a high-luminance, high-definition screen that is easy to look at in both bright and dark places, as well as an exterior coating that is resistant to fingerprints and stains. Furthermore, the smartphone employs a universal font with superior readability.

To make the handset easier to hear, F-12C is equipped with cutting-edge audio technology that employs specially-developed digital sound processing. The smartphone is packed with high-performance audio features, including "Super HAKKIRI VOICE (extra-clear voice) 3" which enhances the clarity of the caller's voice in noisy or crowded places, "PITTARI VOICE (exact voice)" which identifies the user's situation and adjusts the smartphone's audio accordingly, and a voice balance feature that makes the smartphone easier to hear.

With regard to its easy-to-use functionality, Fujitsu has enhanced F-12C's touchscreen accuracy and software performance to enable easy operations. Through high-speed touch feedback technology, the intensity and pattern of the smartphone's feedback vibrations can be adjusted based on the manner or place in which it is being operated. In addition, Fujitsu's proprietary "NX!input powered by ATOK" text input system gives users even greater control over how they input text.

F-12C's design has been developed in collaboration with GLOBE-TROTTER, a purveyor to the British Royal Family that boasts a company history of over 100 years. By fusing GLOBE-TROTTER's universal and original artistic design—which across the ages has gained the admiration of quality-conscious fashion icons and celebrities throughout the world—with the user-convenient concept behind F-12C, Fujitsu has created a simple and easy-to-use smartphone with timeless appeal.

The smartphone is available in two color variations: Black and Rose Gold. 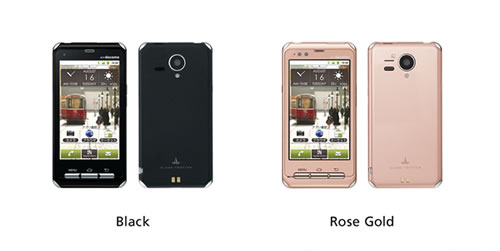 To fully leverage the possibilities of a user-friendly smartphone design, particularly in the areas of readability, ease-of-use, and audibility, F-12C leverages a wide range of technologies from Fujitsu's proprietarily-developed "human-centric engine" to sense the user's movements and environment, and then adjust the settings of different features to provide support accordingly.

Beginning with the smartphone's high-luminance and high-definition screen, which reduces light reflection, F-12C is thoroughly equipped with a wide range of features that make the handset easy to view, including an image processing engine that enables high-resolution videos to be looked at, as well as a universal design font with superior readability.

With enhanced touchscreen accuracy and software performance, the smartphone allows for easily-maneuverable operations. In addition to easy-to-understand operations that leverage high-speed touch feedback technology—which enables the intensity and pattern of the phone's feedback vibrations to be adjusted based on the manner or place in which it is being operated—Fujitsu's proprietary "NX!input powered by ATOK" text input system allows users to select the text input method that best meets their needs. Users can choose between numeric-keypad input, QWERTY input, and handwritten input.

F-12C's advanced audio technology enables a wide range of features that make the handset easier to hear, including "Super HAKKIRI VOICE (extra-clear voice) 3," which enhances the clarity of the caller's voice in noisy or crowded places, and "PITTARI VOICE (exact voice)," which adjusts the phone's audio to the proper volume based on the user's body movements when walking or running. As well, the smartphone is equipped with a voice balance feature that automatically accentuates the high-pitched portions of the sound of the other person's voice, making it easier to hear.

F-12C employs a proprietary Fujitsu user interface that is designed to be sensitive to and intuitive for users. The interface is filled with easy-to-use innovations, such as a status bar drop-down feature that makes pulling up the status screen simple, a touch helper function that features a ripple-like animation, and a slide navigation feature that displays arrows on the left and right of the home screen for a set period of time.

By speaking the names of the applications or settings that the user wants to access into the voice receiver of the F-12C, users can easily launch the respective screens. The function is compatible with different kinds of voices and accents, making it quick and easy to use, particularly when the user has difficulties locating specific applications or settings.

For example, in composing an e-mail message, the user can just tell the smartphone that they want to send a text to a certain recipient. The smartphone will automatically load the e-mail screen with the recipient's name already entered into the address box, making the process very convenient.

5. Equipped with a plethora of functions, including tethering support, water-resistance, and infrared communications