Second package in the SimPRESSO series, which enables easy analysis of electronic components

Fujitsu Limited and Fujitsu Nagano Systems Engineering Limited today announced the release of SimPRESSO/RFL, a new software package in Japan that enables easy analysis of the temperature distribution in the reflow soldering(1) process of electronic components. The new package is designed for manufacturers of components such as electronic car parts and devices.

SimPRESSO/RFL is the second package in the SimPRESSO software series, which enables easy analysis of electronic components simply by following on-screen instructions. The release of the first package, which is designed to facilitate the analysis of heat-related distortion in printed circuit boards, was announced in January 2011.

While skillful techniques for adjusting the heating temperature are essential in preventing heat damage to electronic components in the reflow soldering process, SimPRESSO/RFL enables details of the temperature distribution to be confirmed at a glance, allowing users to immediately ascertain the optimal heating temperature and heating time. As a result, in addition to enabling customers to compress their development times and improve the quality of built-in components, the new package also helps to achieve significant cost savings by reducing the number of observation cycles performed with test components.

In the manufacturing of electronic devices such as digital home appliances and electronic car parts, it is becoming increasingly common to deploy software that analyzes necessary electronic components in the initial design phase in order to be able to develop high-quality products in a shorter period of time. 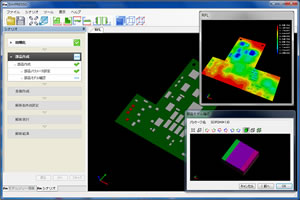 In the reflow soldering process of electronic components, however, skillful techniques for adjusting the heating temperature are essential for avoiding heat damage to the electronic components, and in many cases that means relying on the experience and judgment of workers in adjusting heating temperatures. On the other hand, as lead-free solders, which have become the main type of solders used in recent years due to environmental concerns, have a higher melting point than lead solders, the range of acceptable temperature settings when using them is narrower, making the process of temperature adjustment more challenging.

To address these challenges, Fujitsu and Fujitsu Nagano Systems Engineering are releasing the SimPRESSO/RFL software package, which enables easy analysis of the temperature distribution in the reflow soldering process of electronic components. The new package is the second in the SimPRESSO series, the first package of which was launched in January 2011. With the SimPRESSO series, even designers who are unaccustomed to analysis software can easily perform analyses simply by following the on-screen instructions.

This product will be exhibited July 20-22, 2011, at TECHNO-FRONTIER 2011, Asia's largest electronics and mechanical components technology exhibition, in Tokyo, Japan.

As analyses of the reflow soldering process can be easily performed simply following on-screen instructions, no time is required for operational training. Moreover, with respect to heating temperatures and heating times, as the analysis conditions can be set to the optimal values derived from the customer's own observations, complex analyses can be quickly and easily performed.

2. Enables detailed temperature distribution to be ascertained at a glance

The package is equipped with display functions, such as color displays of temperature distribution and graph displays of temperature trends which enable users to grasp analysis results at a glance. In addition to enabling the temperature in the reflow soldering process to be easily adjusted, regardless of the proficiency of the worker, these analysis results can be immediately shared among relevant divisions, thereby facilitating a smooth discussion of the underlying causes of any defects.

3. Enables cost savings by reducing the number of observation cycles

As the optimal heat temperature and component layout can be determined in advance, the number of observation cycles can be reduced in comparison with the multiple cycles normally required up until now. As a result, the quantity of test components required for the observations can also be reduced, enabling users to enjoy significant cost savings.

* Pricing above is for up to five licenses
* Requires purchase of SimPRESSO/MS (JPY 2.0 million)