Fujitsu Limited and Fujitsu Laboratories Limited today announced the development of technology to improve the accuracy of plant identification with aerial hyperspectral images(1). This enables accurate distinctions to be made even among trees with similar coloring, such as the cedar tree and the Japanese cypress.

This technology makes possible the accurate identification of plant species in an area without on-the-ground inspections of river beds or forests, for example, even by non-experts. As a result, studies on a variety of issues, such as the extent to which non-native plant species are flourishing, and thereby threatening native ecosystems, or studies on the distribution of multiple tree species in a given area, can be performed quickly and at low cost.

Applying information and communication technology to biodiversity conservation is one of the Fujitsu Group Biodiversity Action Principles. In order to conserve biodiversity, it is essential to have an accurate grasp of the existing ecosystem and the status of plant and animal life in a given forest or river, for example.

Up until now, most plant studies have either been on-the-ground surveys by experts or remote studies using satellite photos. Both of these methods have drawbacks. Expert surveys are costly and time-consuming to produce, and often require work in dangerous areas. On the other hand, remote surveys lack precision. Specifically, it is difficult to distinguish among trees with highly similar coloring, such as the cedar tree and the Japanese cypress, both of which are evergreen needle-leaved trees. There is therefore a need for a highly precise method that could accurately distinguish different tree species quickly and at a low cost.

Under conventional methods for distinguishing trees (see figure 1), aerial images taken at a height of approximately 500-2,000 meters by a hyperspectral camera-equipped helicopter or other aircraft are used to measure the wavelength range of the near-infrared reflectance spectrum from the emitted light. The species of trees appearing in the image can be identified by comparing that data with a predetermined reference spectrum for each species of tree. However, as the spectral images of the trees capture not just sunlight but also the reflected light from individual leaves and trees in a forest, resulting in mixed light emission readings, the reflectance spectrum pattern from the same species of tree may differ depending on the location of individual trees. This made it impossible to precisely distinguish trees by using only one reference spectrum for each species.

Building upon this conventional method, Fujitsu developed technology that enhances the precision of tree species identification, even in forests with a mixture of tree types that have similar coloring. For each species of tree to be identified, multiple reference spectra are created to correspond to different reflectance spectra under varying irradiance conditions. By analyzing the aerial hyperspectral images against this reference data, it is possible to distinguish among even very similar species of trees with high precision. 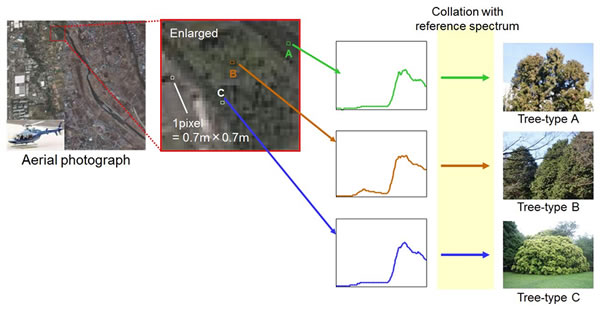 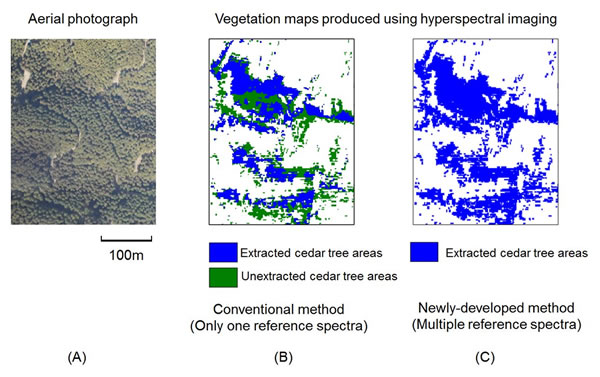 Figure 2: Results with improved method for distinguishing among tree species

With the cooperation of the town of Nakatosa in Japan's Kochi Prefecture, the site of the "Fujitsu Group Nakatosa Kuroshio no Mori"(2) forest conservation activities, field trials of the new technology were conducted in March 2011. The town of Nakatosa has a large man-made forest consisting of cedar trees and Japanese cypress trees. To restore the health of the forest while revitalizing its forestry industry, the town of Nakatosa is actively participating in the J-VER scheme(3)—a CO2 offset program established by Japan's Ministry of the Environment.

In submitting applications for CO2 absorption amounts, the town had to produce a vegetation map showing the locations of cedar trees and Japanese cypress trees, which have different rates of CO2 absorption, so the town had an on-the-ground survey produced. In conducting its field test, Fujitsu took a hyperspectral image of the man-made forest and used the newly developed technology described above to distinguish among the two types of trees. The results of this analysis were essentially the same as the results of the town's survey (figure 3).

The field test verified the effectiveness of the newly developed technology in distinguishing among such highly similar trees as the cedar tree and the Japanese cypress, which had been problematic using conventional remote survey methods.

Figure 3: Comparison of results of the hyperspectral imaging field test versus the conventional survey

The new technology uses aerial images to produce accurate studies, both quickly and cost-effectively, showing the distinction and status of native versus non-native plants in a given area, or the distribution of different species of trees in a forest. Accordingly, it is expected to achieve widespread use in a variety of fields, such as in the production of vegetation maps in locations that are difficult to access, or to accurately assess CO2 absorption levels in forests that have a mixture of different species of trees with different CO2 absorption rates.