Fujitsu announced today that the National Bureau of Statistics of China in Beijing (hereafter NBSC) successfully concluded China's 6th National Census Project this past April 2011, with the help of 1,700 fi-Series large-volume document scanners and Chinese OCR(1) software which were furnished by the Fujitsu Group. China has the largest population in the world and boasts the world's second largest GDP. This project has been highly anticipated both in China and abroad as it took on the extremely difficult task of surveying the country's approximately 1.3 billion residents in order to obtain accurate demographic statistics and information on household lifestyles. NBSC released the results of the project on April 28, 2011.

The Fujitsu Group contributed to the project by providing NBSC with high-duty, high-performance scanners of the fi-Series (the world's no.1 business grade scanner line in terms of market share(2)) and extremely accurate Chinese OCR software.

By addressing the various needs of customers through its system of total support, ranging from hardware and software to services and solutions, the Fujitsu Group continues to contribute to the growth of businesses and society in the booming scanner market in China.

For the project millions of surveyors are dispatched to households all across China to gather basic information from residents including occupation, income, and academic history. Afterwards, the information is collectively digitized and converted to data using a combination of scanners and OCR software in order to ensure fast and accurate calculation of results. About 740 million census sheets with handwritten data had to be scanned at hundreds of NBSC offices across China. 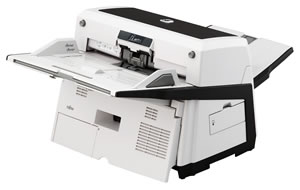 To accomplish this NBSC needed the following:

To satisfy these requirements, NBSC chose high output fi-Series model scanners which are developed and produced by Fujitsu Group subsidiary, PFU Limited(3). For the OCR software, NBSC looked to Fujitsu Research & Development Center Co., LTD(4) which developed software for the project that was optimized for processing handwritten Chinese.

The fi-Series scanners used in this project can deliver a scanning speed of 180 images per minute (90 pages) for A4 size documents and have a duty of 45,000 sheets per day. Developed and produced by PFU Limited, the fi-Series is sold and supported in 185 countries and regions and is proudly promoted as the world's top business grade scanner in terms of market share.

The scanner business of PFU has been expanding in China since 1998 through Fujitsu Hong Kong Limited(5). In addition to producing results in surveys by the NBSC, fi-Series scanners found their way into China's "big 4" state-owned banks(6), numerous major financial institutions, and insurance companies. Today, the fi-Series holds the top share in China's scanner market(7).

The OCR technology that was used in this project was specially developed by Fujitsu Research & Development Center Co., LTD (FRDC). This software can process difficult-to-recognize, handwritten Chinese names at an accuracy exceeding an amazing 99.4%. FRDC also developed the powerful OCR technology which was used in China's 2nd National Agricultural Census in 2006(8).