Enables consolidation of communications equipment into one compact module

This technology makes possible the integration of multiple types of communications equipment—each currently operated at a different frequency range—into a single module, making for the development of smaller, lighter radar equipment and wireless communication systems.

Details of this technology will be presented at the IEEE MTT International Microwave Symposium (IMS 2011) held in Baltimore, Maryland, starting June 5.

Gallium-nitride (GaN) is used as a blue-LED in traffic signal lights, and compared to the conventional semiconductor materials of silicon (Si) and gallium-arsenide (GaAs), it features a high saturation carrier velocity and relative resistance to the breakdown caused by voltage. Given these characteristics, GaN HEMTs—or transistors that use GaN—show promise for high-output and exceptionally efficient operations.

In line with the advance of a network-based society, radio wave demand in a variety of wireless systems is expected to increase even further. For example, aircraft radar typically switches between the C-band, which can detect distant objects and works well in rain, and the X- and Ku-bands which are able to measure physical objects with high-precision.

Currently, this demand for multiple frequency ranges requires different communications equipment each suited to their respective frequency band. However, a single T/R module capable of covering the entire C-Ku band range would meet a variety of needs, allowing systems to become more compact. 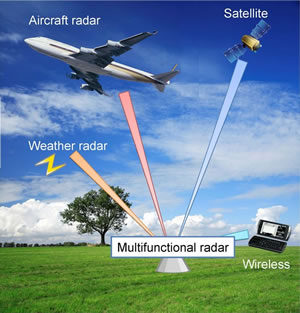 T/R modules are essential to operate multifunctional radar over a broad spectrum. Users therefore demand that T/R modules possess wideband features capable of operating across multiple frequency ranges, and high output performance so as to cover a wide area. To develop a T/R module with 10 W-class high output power over a wide broadband range, such as the C-Ku band, not only is a wideband PA and LNA required, but it is also critical to improve the T/R module's heat dissipation characteristics as heat generation intensifies in tandem with higher output levels. 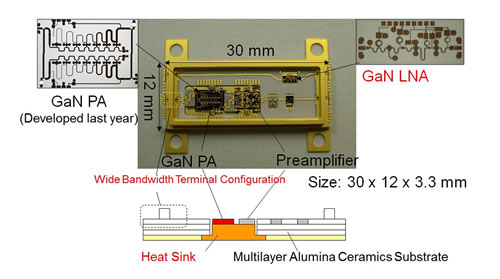 The new technology has enabled Fujitsu Laboratories to develop a compact T/R module measuring only 12 × 30 mm that operates across an ultra-wide broadband 6-18 GHz, with output power of 10 W.

This new technology will make it possible for a single T/R module to operate at multiple frequencies, paving the way for further system integration in broadband communications and radar systems that utilize various frequencies, meaning more compact and lighter equipment.

Fujitsu Laboratories plans intends for this technology to be put to use in a wide range of applications that require compact modules with high output across wide bandwidths, including wireless communications and radar systems.