Fujitsu Laboratories Ltd. today announced the development of the world's first biometric authentication technology that combines data on palm vein patterns with fingerprint data from three fingers. By employing both palm vein pattern and fingerprint data, the technology enables the rapid identification of a given individual out of data from a million people, processing the match within two seconds. 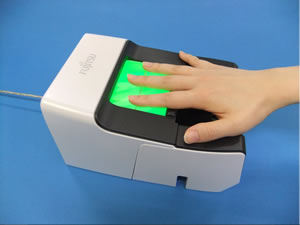 The convenience offered by simply using one's body for authentication—biometrics eliminates the need to carry IC cards—is expected to accelerate the spread of biometrics even further. As the key to realize greater acceptance, the focus has turned to technologies that can recognize with superior speed and precision a given individual out of a million or hundred million people in applications for large corporations and governments. 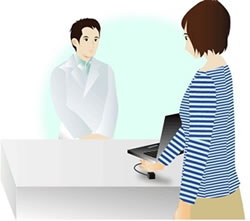 To determine whether specific biometric data of a given individual recorded in an IC card is a match or not (one-to-one matching), such as is the case for authentication systems used in financial institutions, current authentication methods using just one type of biometric data are sufficient. However, when attempting to distinguish and identify a given person from a group of many people (one-to-many matching), precision becomes problematic if the pool of people is as large as a million or ten million people. This results in cases in which it is impossible to clearly distinguish among potential matches using just one type of biometric data. For one-to-many matching, because authentication requires sifting through all records registered in a system, the level of precision required to authenticate one person out of a pool of one million is a million times the level of precision required for one-to-one matching.

One solution proposed for addressing this problem is to build a robust authentication system that combines multiple biometric authentication methods. Separately capturing the biometric data needed for each method, however, diminishes the convenience of this approach. For example, if palm vein authentication were combined with iris pattern authentication(1), both the palm and iris would each need to be separately scanned, compromising simplicity. This necessitated a technology that could easily combine more than one type of biometric data.

Moreover, in order to authenticate one person out of a million, because processing entails sifting through all one million records, authentication processing could take over twenty minutes using conventional technologies. Accordingly, also needed was technology that would dramatically reduce required processing time.

Fujitsu Laboratories has developed a system that can identify a given person out of a pool of a million people, delivering one-to-one million matching. This was accomplished by combining fingerprint authentication, already in wide use and easily performed at high speed, with palm vein authentication, which has superior accuracy and is extraordinarily difficult to falsify, making it highly secure against fraud. The system developed with this technology uses palm vein and fingerprint data from three fingers. Capturing both finger and palm vein data in a single scan, the identity of a given person from a pool of a million can be authenticated within two seconds through parallel processing on multiple servers.

1. Simultaneous and accurate capture of palm vein and three-fingerprints data

Fujitsu Laboratories developed technology that instantly narrows down potential matches to speed the authentication process, even from a pool of a million people. Using data extracted from four different groups of biometric feature data—comprised of the palm vein pattern plus three fingerprints—this technology enables potential matches to be instantly and accurately narrowed down to pinpoint the identity being authenticated.

4. Leverages the power of parallel processing

Fujitsu Laboratories developed technology that uses parallel processing for authentication. Because it is possible to increase or decrease the number of servers used in authentication processing depending on the size of the pool of potential matches, it is well-suited to cloud-based environments. 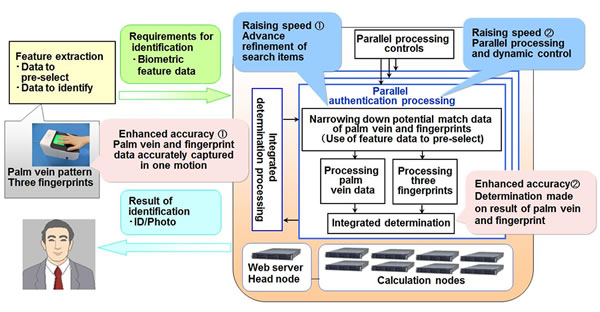 This technology enables authentication of a certain individual's identity from a group of one million. For example, because an individual's identity can be authenticated with biometric data alone without the individual having to carry an ID card, it is anticipated that this technology could be employed in a wide variety of situations that require both security and ease of use. Authentication among large groups of people can be performed by simply deploying additional servers. As such, countries where residency registration systems are underdeveloped can use this technology to provide an ID for each individual, creating a basic system built upon a foundation of social information.

This technology is also able to use, without alteration, the fingerprint imaging data from general-purpose fingerprint sensors already used in applications such as border control and residency identification. Accordingly, by simply adding palm vein pattern authentication to widely used fingerprint authentication systems, this new technology can be easily deployed.

Through further refinements to increase speed and precision, Fujitsu Laboratories plans to make it feasible to authenticate groups on the scale of 10 million people within fiscal 2011, and will also consider applications in a variety of scenarios.