This improvement in throughput will make it possible for users to enjoy services—such as high-quality video content delivery—from any location without interruption.

Details of this technology were presented at the 2011 IEEE 73rd Vehicular Technology Conference (VTC2011 Spring), held in Budapest, Hungary from May 15, 2011.

In recent years, there has been enormous growth in mobile telecommunications traffic in line with the rapid spread of smartphones. LTE, the latest wireless communications standard that enables high-speed data communications of up to 150Mbps, is anticipated to support the ever-increasing demand for mobile broadband services. Even with LTE, however, in overlapping areas (cells) covered by adjacent base stations, inter-cell interference can lead to a significant degradation in user throughput and possible interruptions to video delivery and other mobile services.

In the future, amid increasing volumes of mobile communications traffic, technologies for reducing signal interference at cell-edge areas will be crucial in allowing users to enjoy seamless mobile broadband services from any location.

As seen in Figure 1(a), signal interference becomes an issue at cell-edge areas when other overlapping base stations utilize the same frequencies. Figure 1(b) shows that by employing the frequency reuse (FR) technique, in which each of the adjacent cells utilize different frequencies, it is possible to reduce inter-cell interference. As a result, however, the frequency bandwidth available to each cell narrows and actually leads to lower throughput.

One way to overcome this issue is the fractional frequency reuse (FFR) method (Figure 1(c)), in which only overlapping parts of the cells undergo frequency reuse. This method allocates frequencies between areas close to a base station (cell-center areas) and areas far away from a base station (cell-edge areas). For cell-center areas, transmission power is lowered and the same frequencies are used in all of the cells. On the other hand, cell-edge bands have higher transmission power and undergo frequency reuse.

However, the ICIC method in Figure 1(c) assumes that all areas are equal. In actuality, however, inter-cell interference can still occur for the following reasons: 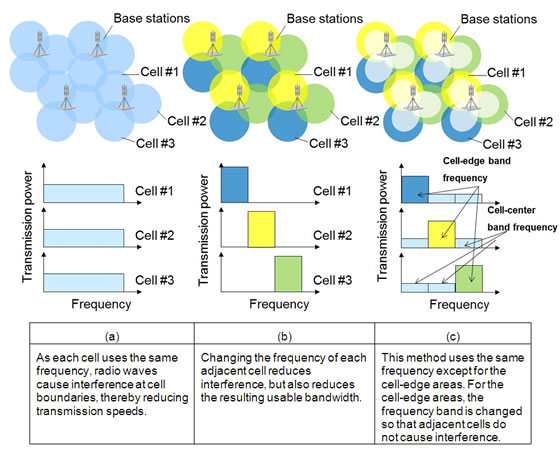 To address these issues, Fujitsu Laboratories developed an ICIC method for LTE that controls inter-cell interference by taking into account the impact of cell configuration and user distribution.

As conventional ICIC methods did not adjust for imbalances in the configuration of cells and the distribution of users, but instead allocated frequency bands of cell-edge area according to a geographical distribution of cells, adjacent cells could actually be using the same frequency (left, Figure 2). This newly developed technology, however, allows adjacent base stations to recognize each other's circumstances and change the frequency bands of cell-edge area in order to reduce inter-cell interference on users in the cell-edge areas. 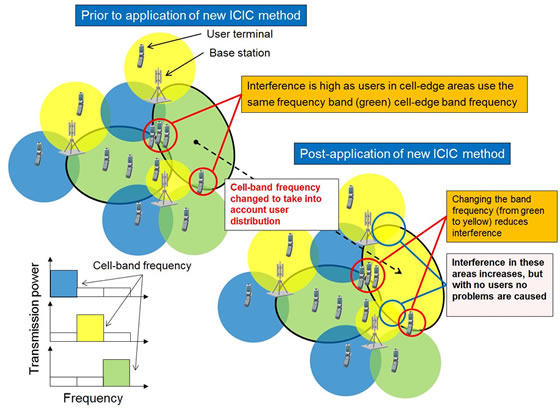 Figure 2: Overview of How the Newly-Developed Interference Coordination Method Works

In an evaluation of simulation results achieved using the newly developed ICIC technology for LTE, when the configuration of cells was not uniform and the distribution of users was imbalanced, transmission speeds in the cell-edge areas roughly doubled compared to methods that did not control interference. As a result, even if many users congregate in the cell-edge areas, they can enjoy services, such as transmission of high-quality video content, without interruption.

Fujitsu Laboratories will plan how best to incorporate the newly developed ICIC into LTE base stations with the goal of commercializing the technology in 2-3 years.