Fujitsu today announced that it has updated its FMV Series of consumer-oriented personal computers, with a total of 16 models in 7 product families. The new models will be available only in Japan beginning May 19, 2011.

The LIFEBOOK family of notebooks includes the new TH family of models featuring a "hybrid motion" design that can swap between touch operations and keyboard input depending on the scenario in which it is used. The ESPRIMO family of desktops includes the FH family of all-in-one models with built-in 20" liquid crystal displays. Equipped with an updated slim, simple, and stylish design, these models allow users to fully enjoy watching TV broadcasts in stunning image and clear audio quality.

The FMV Series includes a variety of innovative capabilities that enable the computers to be used in new ways. New features include F-LINK, which provides users with the ability to wirelessly transmit photos and videos captured on their smartphones to a PC for convenient storage, a Smart Pose feature employing the computer's enhanced motion sensor-enabled webcam, and wireless TV functionality that allows users to enjoy TV broadcasts wherever they wish—without being limited by the positioning of an antenna. In addition, Fujitsu has enhanced the series' gesture control features.

Moreover, the series has been designed to support the pressing social demand of energy conservation. Beginning with a peak-shift control feature, a number of capabilities are available for controlling the power supply depending on the environment in which the computer is being employed, how it is being used, and its operating status. As a result, the computers help to reduce customers' power consumption.

Key Features of the Summer 2011 Models

The new lineup includes the addition of the TH family, which features a "hybrid motion" design that can swap between touch operation and keyboard input depending on the usage scenario, in addition to upgraded CPUs, memory, and hard disk capacity, as well as BDXL™-compatible Blue-ray Disc drives(1). Additionally, the FH family also boasts new designs. 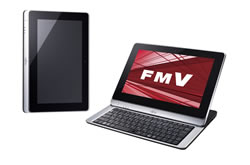 (1) LIFEBOOK TH Family: enables both touch operations and keyboard input With a "hybrid motion" design, these models can be operated in two different ways, depending on the scenario in which they are being employed. When browsing the Internet or viewing photographs, users can operate these notebooks as slate PCs via touch operations. When performing text input-intensive tasks such as composing e-mail, the configuration can be converted for keyboard input. The models come with an easy-to-read 10.1" wide-format liquid crystal display, are approximately 17.4mm thick, and weigh only 1.1kg, making them easy to carry around. 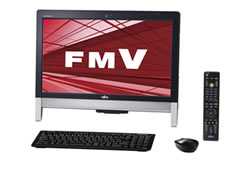 (2) ESPRIMO FH Family: new design for enjoying TV broadcasts in stunning image and clear audio quality (20" wide-format LCD model) This family of entertainment-oriented, all-in-one 20" wide-format liquid crystal display computers boasts an updated design. A slim and simple enclosure, combined with a masterfully-engineered surface texture on the pedestal and speakers, makes for a stylish design that fits perfectly into any interior decoration. Moreover as the space-saving enclosure measures only 17cm deep (when standing vertically), the keyboard can be stored below it while the LCD screen can be freely adjusted between 10-30°. The built-in speakers, manufactured by Onkyo, are the perfect compliment to DTS surround sound and allow users to experience realistic audio quality, making TV viewing enjoyable.

(1) Smart Pose: never miss out on your favorite TV scene The FMV Series is equipped with an enhanced motion sensor-enabled webcam which automatically detects the user's face, as well as a new Smart Pose(2) feature that leverages the proprietary "Sense YOU Technology" developed by Fujitsu Laboratories Limited. With Smart Pose, when users step away from in front of the PC when watching TV, the image will automatically pause until they return to their seat, in which case the video will continue from where it left off. As a result, users will never miss out on their favorite scene, even during a TV broadcast. This feature is also compatible with recorded TV programming, Blu-ray Discs, DVDs, etc.

(2) F-LINK(3) wireless transfer of data from a smartphone Smartphones can wirelessly connect to the PC, and photographs and videos can be easily transferred from a smartphone to the PC. This convenient feature makes it possible to load data without the burdensome process of connecting a cable to the mobile phone, or removing and inserting a memory card. After the transfer is complete, the images are automatically organized by the My Photo Viewer application and can be effortlessly looked at and enjoyed.

(3) Wireless TV: enjoy TV from your favorite place With the LIFEBOOK AH52/DA which features a 15.6" wide-format liquid crystal display, users can wirelessly view and record digital broadcasts on their computer by simply connecting the TV antenna cable to the accompanying wireless TV unit. This allows users to watch TV anywhere in the house(4), including rooms where there is no antenna outlet, and to take recorded TV programming to enjoy while on the go(5).

(4) Enhanced gesture control features(6): control videos and music by gesturing toward the webcam Using the enhanced gesture control features, users can perform operations—such as speeding up music and videos, pausing them, or adjusting the volume—by waving a hand at the computer's webcam. Users can expand or shrink an image by a variety of hand gestures such as pinching their fingers together on both hands, moving their hands together, or separating them along a diagonal line. By moving their hands in separate directions in an upward or downward motion, users can also rotate the image. As a result, this makes using the computer even more convenient.

3. A wide range of power-saving features

In designing the FMV Series, Fujitsu has undertaken a variety of provisions aimed at conserving energy and contributing to the environment from the basic product design stage. This includes the use of LED backlights(7) that consume very little power, efforts to achieve the energy consumption targets as defined in Japan's energy conservation laws(8), and support for international Energy Star program standards(9). The FMV Series helps to reduce energy consumption, both when the products are being used and not in use.

(1) The LIFEBOOK family of notebooks offers peak-shift control functionality With the peak-shift control feature, models in the LIFEBOOK notebook family can automatically switch to battery operations and prevent the battery from charging during predefined periods of time(10). For instance, during the period of peak energy demand, such as in the afternoon, the computer will switch its power source to the battery which can then be recharged during the night when demand for energy is low. As a result, the computer is able to contribute to the even distribution of power consumption, even when the AC adapter is left plugged in.

For the summer 2011 line and existing models released after Fall/Winter 2007(11), customers will be able to employ a special software package (free-of-charge), scheduled for release in late May, that will enable them to utilize this peak-shift control functionality.

(2) "Zero Watt AC Adapter" virtually eliminates standby power consumption from the AC power supply when off or in sleep mode When off or during sleep mode, by utilizing the ECO Sleep(12) feature, which limits the supply of power from the AC adapter after the battery has fully charged, the FMV Series is able to reduce power consumption by roughly 59%(13). Furthermore, the LIFEBOOK SH76/D personal computer comes standard with a new "Zero Watt AC Adapter" (ECO Sleep-compatible AC adapter), thereby nearly eliminating power from the AC power supply when the computer is turned off or in sleep mode. This, in turn, reduces power consumption by roughly 75%(14).

By utilizing the ECO Sleep feature or Zero Watt AC Adapter, users can conserve electricity even when the power cord is left plugged into an outlet.

(3) "Power Saving Utility"(15) limits electricity consumed by unused features By simply pressing the ECO button(16), the computer can be switched into power saving mode. During power saving mode, electricity supplied to unused features can be controlled and reduced, such as the reduction of excess screen brightness, muting sound, and stopping the supply of power to optical disk drives.

(4) "Interconnected Power Source Service Outlet" and "Main Switch" With the ESPRIMO DH54/D, by attaching a power supply outlet, the PC tower can provide electricity to the display. This "Interconnected Power Source Service Outlet" will cut off power to the display when the computer itself is powered off, preventing users from forgetting to turn off the display. In addition, the model comes standard with a "Main Switch" that is separate from the power button and eliminates standby power consumption.

4. Packed with software and new features

(2) "One-Push Photocopy"(18) feature for easily downloading photos when the computer is turned off. Photos can be transferred by simply inserting an SD card into the PC and pushing the power button.

(3) New "Mobile Project Unit" (sold separately) for projecting a large-screen image onto a wall or screen. Can be used after plugging it into the Mobile Multi-bay. As the projection angle can be adjusted between 0-90°, the user can project a bright image of up to 40 lumen onto the ceiling, allowing them to enjoy a movie while lying down (only supported by the 13.3" wide-format LCD LIFEBOOK SH family of notebooks).