Fujitsu Limited, Fujitsu Frontech Limited, and Fujitsu Laboratories Limited today announced its achievement of the world's smallest and slimmest(1) contact-free vein authentication sensor out of the previous plethora of vein authentication devices including those for the finger or back of the hand.

The sensor's smaller and slimmer form factor makes it easy to incorporate into the design of personal computers and other electronic devices, thereby helping to expand the range of potential applications for palm vein authentication.

With the inclusion of a high-speed image-capture function that can continuously capture up to 20 frames per second, as well as a feature that can instantly pick out the best image for authentication and automatically verify it, users do not need to hold their hand motionless over the sensor, as before, but can instead perform authentication by simply placing their palm lightly over the sensor. This enables a dramatic improvement in usability.

In biometric authentication, as ease-of-use has a direct impact on user comfort, Fujitsu has sought both robust security and superior user-friendliness for its palm vein authentication technology.

Until now, the individual's palm needed to be held motionless over a relatively thick, specialized device in order to capture an image of the palm veins. However in order to make the technology readily applicable to an even broader range of applications, there has been significant demand for smaller, thinner sensors and an easier authentication process.

With an eye toward incorporating this sensor into a variety of electronic devices, Fujitsu has developed the world's smallest and slimmest vein authentication sensor amongst a plethora of vein authentication devices including those for the finger or back of the hand. Moreover, the sensor's high-speed image capture and automatic verification enable a dramatic improvement in usability. The key features of the new sensor are as follows: World's smallest and slimmest sensor of its kind

World's smallest and slimmest sensor of its kind

Fully leveraging its advantages as a palm vein authentication sensor that is contact-free and employs an image-reflective method for authentication, the new sensor is 29.0 mm wide, 11.2 mm tall, and 29.0 mm thick, making it the world's smallest and thinnest sensor of its kind.

To make this form factor possible, Fujitsu developed a new lighting system for components inside the sensor used in photography that enables uniform illumination. The result is a photographic optical system that is half as thick as previous models. This smaller size greatly increases the range of devices into which the sensor can be incorporated.

The sensor includes a high-speed image-capture system that continuously captures the user's palm veins at 20 frames per second, as well as a feature that instantly identifies the best image from among the captured images and automatically verifies it. This allows users to perform authentication by simply placing their palm lightly over the sensor, rather than holding their hand motionless over the sensor, as before, thereby enabling highly-accurate and convenient operation. 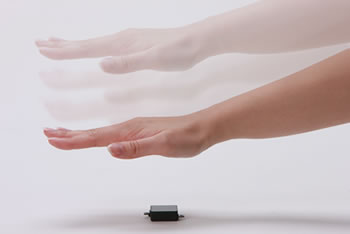 Performs authentication when the user's palm is passed over the sensor

Performs authentication when the user's palm is passed over the sensor

In recent years, biometric authentication, which can accurately identify individuals based on their biological characteristics, has grown in popularity as a means of personal identification. Of all the existing biometric approaches, vein authentication, which reads the invisible pattern of veins in the palm or finger, offers the benefits of being both highly accurate and resistant to misconduct such as forgery and impersonation.

Within the field of vein authentication, Fujitsu developed the world's first contact-free palm vein authentication technology in 2003, and began selling palm vein authentication equipment based on this technology in 2004 (new products were introduced in 2006 under the brand name "PalmSecure"). The technology has been highly-appraised for its ease-of-use and assurance that it has given users through its robust security. It has been widely adopted both inside and outside Japan as a means of personal identification at financial institutions, and as a computer login and room entrance control method at corporations.

Compared to finger veins, palm veins are more numerous and create complex patterns, resulting in a higher volume of data. Consequently, the system's recognition accuracy is extremely high, with a false-negatives rate of 0.01% and a false-positives rate of 0.00008%. Furthermore, the fact that the system uses an individual's thicker veins allows for stable operations over time. Lastly, the system is contact-free, helping to reduce any existing psychological burdens placed on users.

As part of the Fujitsu Group, Fujitsu Frontech Limited ties people and IT together through the development, manufacture and sale of front-end technology such as ATMs, operation branch, POS and totalizator terminals, and public display devices. Fujitsu Frontech also delivers related software, system integration and outsourcing as part of its total solutions offerings. The company supports the security sector by offering products incorporating Fujitsu's latest palm vein authentication technology, and is actively involved in the development of key technologies in various fields, with a current focus on color electronic paper and RFID systems.For more information, please see: www.frontech.fujitsu.com/en/.