Fujitsu today announced the recently completed construction of a new supercomputer system for the Foundation for Computational Science (FOCUS).

FOCUS will utilize this system to support the development of advanced computer simulation technology for businesses, to promote academic-industry collaborative research, and to pursue initiatives including personnel training for experienced engineers working in a corporate setting.

In recent years, computer simulations are becoming increasingly important as a third major technique employed in science, alongside theory and experimentation. In Japan, computer simulations have become essential for optimizing the efficiency of a company's product development and enhancing the international competitiveness of the country's industries. However, there are only a few businesses that leverage the full potential of large-scale supercomputer simulations. In addition, the lack of support for the dissemination of supercomputers remains a challenge.

Against this backdrop, FOCUS has established to contribute to the advancement of the field of computational science and the development of business and the economy with the utilization of Japan's Next-Generation Supercomputer, the "K computer(2)" through funding from Hyogo Prefecture, Kobe City, and the Kobe Chamber of Commerce in January 2008.

The FOCUS Supercomputer has been installed at FOCUS' advanced computational science research support center, which is located directly next to the Next-Generation Supercomputer facility(3) located on Kobe City's Port Island. The system will begin operations April 1, 2011. 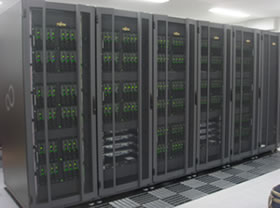 In aiming to bring about the revitalization of business though the spread of simulation technology, FOCUS will be using this system to begin trials of large-scale simulations requiring a high degree of parallelization and highly-parallel calculations. In addition to supporting a variety of supercomputer applications that will lead to enhanced R&D capabilities as well as efficient and inexpensive manufacturing processes, FOCUS will participate in initiatives including personnel training in collaboration with universities for experienced engineers working in a corporate setting.

About the FOCUS Supercomputer 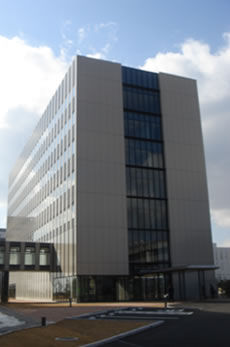 The core of the new system is a x86 cluster system comprised of 208 PRIMERGY BX922 S2 blade server nodes. Each node features two Intel® Xeon® Processor L5640 (2.26GHz) CPUs, which feature superior energy performance, allowing for a total of 416 CPUs and a theoretical peak performance of 22 teraflops. The nodes are connected by a high-speed InfiniBand™ QDR(4) interconnect, enabling a high-performance parallel computing environment.

In addition, this system employs the high capacity PRIMERGY RX600 S5 for its data processing server, as well as the SPARC Enterprise M3000 server, which is equipped with Fujitsu-developed CPUs featuring SPARC architecture. The system features 1 petabyte of storage for storing simulation data and system backups, made possible by the ETERNUS DX80. 33 ESPRIMO K551/B PCs will also be deployed for training users of the system.

With the support center as its base of operations, FOCUS plans to position itself as a center for utilizing high-performance computing(5) technologies in business. The organization will work to spread the latest research results generated by the next-generation of supercomputers to the business world, while also leveraging the new supercomputer system and other features of the support center, which is equipped with laboratories and rental research facilities. In the future, FOCUS aims to help businesses enhance their competitiveness through the deployment of high-performance computing technologies. In addition, the organization will try to play an incubatory role in high-performance computing software development and in providing services.

From x86 clusters to high-end supercomputers, Fujitsu will continue to provide comprehensive support for its customers' R&D and analysis work through its extensive product lineup, strong services structure, and over thirty years of experience in high-performance computing support.