Reduces power consumption to less than half of commercialized 40-Gbps optical transmitters; represents major step toward next generation of high-speed communications

Fujitsu Limited and Fujitsu Laboratories Ltd. today announced the achievement of a 40 gigabits per second (40-Gbps) optical-fiber transmission employing an uncooled directly-modulated laser(1). This was realized through the combination of a structure specifically adapted to high-speed operation, and a newly-developed structure capable of lowering operating current and enabling high-temperature operation. Featuring power consumption at less than half that of commercialized 40-Gbps optical transmitters, Fujitsu's new directly-modulated laser obviates the need for a thermoelectric controller. This achievement represents a major step toward lowering the power consumption of the next generation of high-speed optical communications.

Details of this technology were presented at the Optical Fiber Communication Conference and Exposition/National Fiber Optic Engineers Conference 2011 (OFC/NFOEC 2011) being held in Los Angeles from March 6-10. Part of this work was carried out under the "Next-generation High-efficiency Network Device Project" which the Photonics Electronics Technology Research Association (PETRA) contracted with New Energy and Industrial Technology Development Organization (NEDO) of Japan.

With the emergence of cloud computing services and high-definition video distribution services, the data traffic over networks is growing explosively. To keep pace with the continuous growth of volumes of data, datacenter operators have begun to employ high-speed optical communications capable of speeds of over 10-Gbps within their datacenters. To reduce the burden these datacenters place on the environment, there is a growing need for optical communications that consume less electrical power.

In optical communications, in which high volumes of data are transmitted at high speed using light, converting electrical signals to optical signals requires a light source for which intensity of light output can be modulated. There are two main methods for modulation: direct modulation, for which input current to a semiconductor laser is modulated; and external modulation, in which a light source from a semiconductor laser is modulated by an external optical modulator. Direct modulation is primarily used for low-speed, short-distance transmissions, while external modulation is mainly employed for high-speed, long-distance transmissions.

For transmissions at speeds up to 10-Gbps, directly-modulated lasers are being used that do not require a thermoelectric controller or cooling, allowing them to be more compact and operate on less power. For high-speed communications that exceed 10-Gbps, external modulation by lasers with integrated electro-absorption modulators(2) have been used for short-distance transmissions up to 10 km. But in order to stably operate lasers with integrated electro-absorption modulators, more than half their total power use needs to be dedicated to cooling via a thermoelectric controller, presenting an obstacle to lowering the power consumed.

To create compact, energy-efficient equipment that can accommodate the high-capacity optical communications that will be increasingly prevalent, there are needs for directly-modulated lasers that can operate at speeds of over 10-Gbps without the need for cooling. This, in turn, would require high-speed direct-modulation at a low driving current.

Fujitsu has developed a directly-modulated laser that operates at 40-Gbps in the 1.3 µm wavelength band. Details of this technology are as follows:

The active layer that produces the laser light consists of a multiple quantum-well structure made of aluminum-gallium-indium-arsenide (AlGaInAs) - which is especially well-suited to high-speed operation - and for the optical waveguide, a semi-insulating buried heterostructure(3) is adopted featuring a low parasitic capacitance that is ideally suited for use at high speeds (Figure 1).

The active layer is short at merely 100 µm in length, featuring a newly-developed short cavity structure that integrates reflective mirrors at each end (Figure 1). An effective method of increasing the speed of a direct-modulation laser is to shorten the length of the active layer region, but a shorter active layer region in a conventional laser structure would require higher gain for the laser oscillations and, problematically, a higher driving current.

Integrating a highly reflective mirror with 100µm length on the back side of the active layer region, and a mirror with 50µm length on the front side, creates optical feedback to the active layer region, thus limiting the enhancement of gain required in the laser oscillations and enabling lowering of the driving current necessary for high-speed modulations. This enables operation that does not require cooling, thereby obviating the need for a thermoelectric controller.

This new technology from Fujitsu has resulted in the world's first successful 40-Gbps single-mode optical fiber transmission over 5 km, for a directly-modulated laser featuring an operation temperature range of 25°C to 70°C.

This technology obviates the need for thermoelectric controllers that are currently used in 40 Gbps optical transmitters, and cuts power consumption by more than half. In addition, the reduced part count can lead to lower costs. 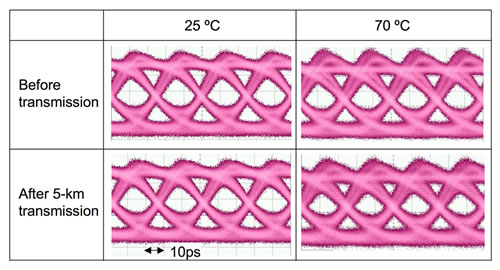 Figure 2: Waveform comparison before and after 5-km single-mode optical-fiber transmission

Fujitsu will continue with further development of this technology to extend the upper temperature range and distances over which this new technology can operate, while making improvements to the device's structure and manufacturing process technologies, and is proceeding with R&D targeting practical use.

Company and product names mentioned herein are trademarks or registered trademarks of their respective owners. Information in this press release is accurate at time of publication and is subject to change without advance notice.