Fujitsu today announced that the new REGZA Phone IS04 smartphone from Fujitsu Toshiba Mobile Communications will be available in Japan from KDDI Corporation and Okinawa Cellular Telephone Company beginning February 10, 2011 in Japan only.

The IS04 is an Android™ OS-based smartphone—the first water-resistant smartphone available from au—featuring the Mobile REGZA Engine, which is based on technology for producing beautiful picture quality, and a 12.2 megapixel high-performance and high-resolution camera that is among the top of its class of smartphones. In addition, the mobile phone incorporates a variety of familiar and convenient features found on existing mobile phones, including Osaifu-Keitai®(1) and infrared communications.

The IS04 is also compatible with au's new WIN HIGH SPEED(2) service, making it an advanced high-spec smartphone that enables speedy operations with communication speeds of up to 3x(3) that of existing handsets.

Equipped with Mobile REGZA Engine 3.0—a processing engine optimized for smartphones that is based on the super-resolution technology employed in Toshiba's REGZA LCD TVs, the IS04 enables users to enjoy watching one-segment TV, YouTube™, and other videos in beautiful image quality. The handset's 12.2 megapixel autofocus-enabled camera ranks among the industry's highest performance cameras for a smartphone, and it is also capable of recording hi-definition video footage.

The mobile phone is compatible with au's new WIN HIGH SPEED service and can be used to quickly download applications, as well as send and receive movies at downlink speeds of up to 9.2Mbps and uplink speeds of up to 5.5Mbps. Furthermore, the mobile phone's 1GHz CPU chipset makes it possible for users to enjoy browsing the web and playing YouTube™ videos with comfort.

In addition, the IS04 is equipped with a number of features that have been highly requested by users of conventional mobile phones, including IPX5/IPX7(4) water-resistance—the first smartphone from au with this feature—as well as Osaifu-Keitai® functionality, one-segment TV viewing, infrared communications, and the ATOK Japanese input system, making the IS04 an all-in-one, high-spec smartphone. The mobile phone is available in two color variations: BLACK and WHITE. 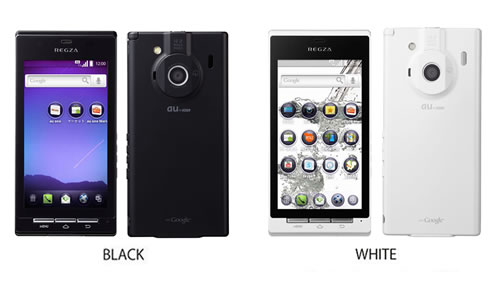 Mobile REGZA Engine 3.0 employs a variety of advanced features, such as super-resolution technology, which processes complicated images in real-time; auto-image adjustment, which adjusts the mobile phone's backlight in response to the brightness of the surrounding environment and performs picture correction, thereby enabling users to view the screen without being affected by the brightness of surrounding light; and noise reduction, which reduces alias distortion, an issue common to one-segment video that existing noise reduction technologies have been unable to remedy. These features make it possible to enjoy one-segment broadcasts and videos in more beautiful high-resolution using the phone's large 4" screen. In addition, the Mobile REGZA Engine 3.0's frame interpolation functionality helps to smooth one-segment streams, allowing users to view high-quality videos.

2. Water-resistant and compatible with Osaifu-Keitai® and infrared communications

The mobile phone features IPX5/IPX7 water-resistance technology. It can be used in any environment, including the kitchen, bath and outdoors, without users needing to worry about it getting wet. As the IS04 is compatible with Osaifu-Keitai®, users can take advantage of services like electronic money and coupons. The mobile phone can also exchange contact information with other mobile phones using infrared communications.

ATOK for IS04 The IS04 features the latest Japanese input system that displays the most appropriate word options based on the word's context. This convenient feature makes composing e-mail and other documents effortless.

Flash® Lite® compatibility(6) Just as if they were browsing websites on a PC, users can view sites that employ Flash technology. Using pinching hand gestures, the screen size can also be easily expanded or reduced.

Hi-Vision video recording(7) The camera is capable of recording Hi-Vision video footage (1,280 × 720 resolution). Users can enjoy even the most subtle details in their images.

Face-finder autofocus(8) When taking photos, the mobile phone automatically focuses on the subject's face using an image-processing engine. Simply by tapping on the touchscreen, the user can manipulate the shot to focus on their object of choice. Other functions include automatic face-tracking focus, smile finder, and panoramic mode.

Original NX!UI home-screen for the REGZA Phone IS04 The original NX!UI home-screen(9) interface fulfills the needs of users who want to quickly access their favorite websites and keep a constant eye on Twitter™. Users can set function icons from 17 different options, and instantly access applications and features by simply sliding the screen to the left or right with their finger.

Star Memos Similar to sticky notes, users can save Star Memos containing not only text, but also information such as website news, map routes from a train station, as well as their favorite Twitter™ tweets. By briefly pressing the camera key located on the side of the mobile phone, the user can access the Star Memo composition screen to save memos of interest, ranging from text and handwritten messages, to photographs and videos. Users can take advantage of the IS04's unique smartphone capabilities by directly posting saved Star Memos to Twitter™ as tweets or uploading them as images to Picasa™.

Compatibility with Key Services and Applications