Fujitsu today announced that it has updated its FMV Series of consumer-oriented personal computers with a total of 22 models in 9 families. The new models will be available only in Japan, beginning January 20, 2011.

Ten models will be equipped with the latest version of the Intel® Core™ processor family for fast performance and smooth operation. Intel® Turbo Boost Technology 2.0 ensures that even processor-intensive tasks like playing and editing high-definition video (AVCHD format) are effortless.

The new lineup includes a range of models designed to suit modern lifestyles. The LIFEBOOK family of notebooks includes the SH-class models, which work equally well as a home's main computer, and out and about as a mobile PC. The ESPRIMO family of desktops includes the FH- and EH-class all-in-one models with built-in liquid crystal displays, all of which are equipped with tuners for terrestrial digital TV broadcasts. FH-class models can simultaneously tune in two digital programs transmitted over terrestrial broadcast, broadcast satellite, or 110° communications satellite, and have ultra-long "10x double recording" mode(1) to store a maximum of 1,789 hours(2) of programming, so customers can enjoy their fill of television.

Finally, with the addition of the FH99/CM to the lineup, Fujitsu brings a new dimension to digital media, with a 3D display that does not require special glasses to view.

Key Features of the Spring 2011 Models

1. Equipped with the latest version of Intel® Core™ processors for fast performance

For effortless playback and editing of high-definition video (AVCHD format) and other processor-intensive tasks, ten models in the FMV series are equipped with the latest version of Intel® Core™ high-performance processor, including models in the ESPRIMO all-in-one desktop family with wide-format LCD screens as large as 23", the LIFEBOOK family of notebooks with wide-format 12.1" liquid crystal displays, and the high-spec PH74/C mini notebook. With the updated Intel® Turbo Boost Technology 2.0, processors can step up their clock speed to deal with more demanding tasks, ensuring smooth performance when handling high-definition video. For the first time, three models are being offered with the latest quad-core Intel® Core™ i7-2630QM processor: the NH77/CD with a 17.3" wide-format display, the AH77/C with a 15.6" wide-format liquid crystal display, and the FH99/CM and FH98/CM all-in-ones with a 23" wide-format liquid crystal display.

In addition, with support for Intel® Wireless Display (Intel® WiDi) which enables media stored on a computer to be transmitted wirelessly to and displayed on a television, customers can edit videos in high definition on their computers and watch them on their large-screen televisions.

2. A product line with models to suit modern lifestyles

The FMV Series covers a range of models that are each designed to fit various lifestyles.

The LIFEBOOK SH family: high performance and ease of use, at home or on the go 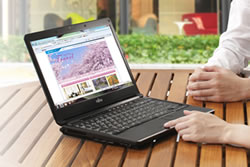 The SH76/C large-screen notebook, like the AH family, is equipped with the dual-core Intel® Core™ i5-2520M processor for effortless editing and playback of high-definition videos (AVCHD format), but with its weight being a mere 1.52 kg(3) and battery life being a long-running 11 hours(4), it is the perfect companion to take outdoors. It has also been designed to endure, having undergone clamshell load testing(5) for strength. Mobile WiMAX wireless broadband(6) provides access over a large area, and the scroll pad makes it easy to navigate websites without needing to reach for a mouse. 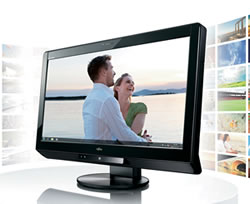 The new FH99/CM makes it easy to watch 3D video without glasses on its 23" wide-format display. A special "3D conversion panel" is installed over the display to make this possible.