Fujitsu Laboratories Ltd. today announced that it has developed a new hybrid energy harvesting device that generates electricity from either heat or light. With this single device, it is possible to derive energy from two separate sources, which previously could only be handled by combining individual devices. Furthermore, because the cost of the hybrid device is economical, this technology paves the way to the widespread use of highly efficient energy harvesting devices. The new technology has great potential in the area of energy harvesting, which converts energy from the surrounding environment to electricity. Since there is no need for electrical wiring or battery replacements, this development could enable the use of sensors in previously unserved applications and regions. It also has great potential for powering a variety of sensor networks and medical-sensing technologies.

Details of this technology will be presented at the IEEE International Electron Devices Meeting 2010 (IEDM 2010) being held from December 6-8 in San Francisco.

Energy harvesting is the process for collecting energy from the surrounding environment and converting it to electricity, and is gaining interest as a future next-generation energy source. Conventionally, electricity is supplied by either a power plant or a battery, requiring electrical wiring and replacement batteries. In recent years, the idea of using ambient energy in the forms of light, vibration, heat, radio waves, etc. has become increasingly attractive, and a number of methods to produce electricity from these different kinds of energy sources have been developed. Energy harvesting technology would eliminate the need for replacing batteries and power cords. 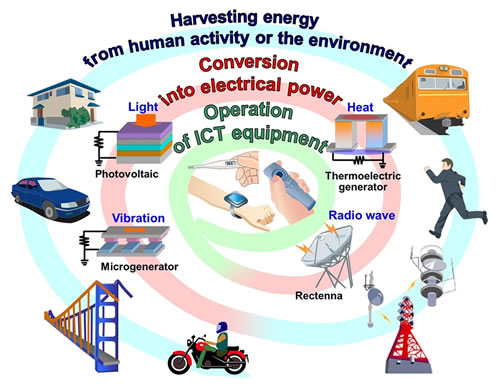 Electrical power that can be generated by energy harvesting from surrounding light, vibration, heat, radio waves, etc. is minute compared to what is available from power plants or batteries. Thus, in order to operate ICT equipment by energy harvesting, devices that can generate more power would be needed. For example, light and vibration are not always available in the ambient environment. Therefore, there is a growing demand for devices that can efficiently derive energy from the surrounding environment at any time, thereby enabling the devices to be used at all times.

Since the amount of power available by energy harvesting is quite limited, there has been interest in utilizing multiple forms of external energy simultaneously - such as light and heat, or light and vibrations - in order to collect a sufficient amount for practical use. In the past, this has been achieved by combining different kinds of devices, which leads to higher costs.

Fujitsu Laboratories has developed a new hybrid harvesting device that captures energy from either light or heat, which are the most typical forms of ambient energy available for wide-scope application. This makes it possible for a single device to capture energy from either heat or light without combining two harvesting devices. In addition, as it can be manufactured from inexpensive organic materials, device production costs can remain low.

Details of the new technology are as follows.

By changing the electrical circuits connecting two types of semiconductor materials - P-type and N-type semiconductors - the device can function as a photovoltaic cell or thermoelectric generator (Figure 2).

2. Development of an organic material for hybrid generating devices

Until now, photovoltaic cells - which generate electricity from light, and thermoelectric devices - which generate electricity from temperature differentials, have only been available as separate devices. This new technology from Fujitsu Laboratories doubles the energy-capture potential through the use of both ambient heat and light in a single device. In medical fields, for example, the technology could be used in sensors that monitor conditions such as body temperature, blood pressure, and heartbeats - without batteries and electrical wiring. If either the ambient light or heat is not sufficient to power the sensor, this technology can supply power with both sources, by augmenting one source with the other. In addition, the technology can also be used for environmental sensing in remote areas for weather forecasting, where it would be problematic to replace batteries or run electric lines. 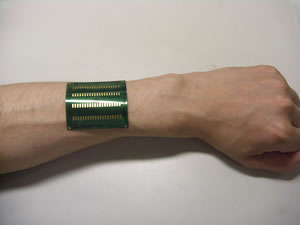 Fujitsu Laboratories will continue with further development of this new technology to increase the performance of hybrid devices, with aims to commercialize the technology by around 2015.