Fujitsu Develops Optical Switch that Cuts Power Consumption by Half

Fujitsu Laboratories Limited today announced that it has been able to halve the power consumption of an optical waveguide switch based on silicon photonics(1) through the world's first use of fine-patterned silicon germanium (SiGe) for this application, rather than conventional silicon (Si). This achievement will allow for high-speed optical switches capable of operating across a wide range of wavelengths, while featuring the world's lowest power requirements. In accordance with the constant rise of data volume being transmitted over networks, likewise, the power consumption of networking equipment shows a continuous growth trend, leading to concerns for a potentially serious energy problem in the future. Fujitsu's newly-developed technology will help contain power consumption while supporting large-volume network traffic, thus enabling high-end services linking multiple cloud networks and ultra-high-definition videoconferencing, among other applications.

Details of this technology will be presented at the 23rd Annual Meeting of the IEEE Photonics Society (PHO 2010), being held from November 7-11 in Denver, Colorado, U.S.

Parts of this research were undertaken as part of the work of the Vertically Integrated Center for Technologies of Optical Routing toward Ideal Energy Savings (VICTORIES) project, as part of the program The Formation of Innovation Center for Fusion of Advanced Technologies, sponsored by the Special Coordination Funds for Promoting Science and Technology, of Japan's Ministry of Education, Culture, Sports, Science and Technology (MEXT).

With the spread of data-intensive network services, such as cloud computing and ultra-high-definition video distribution, the volume of data being transmitted over networks looks set to rise continuously. Accordingly, the amount of electricity consumed by networking equipment in the year 2025 is predicted to be 13 times the 2006 figure if no energy-saving measures are taken (source: Japan Ministry of Economy, Trade and Industry's "Green IT Initiative" report, December 2007), leading to concern for a potentially serious energy problem.

Conventionally, switching between optical network paths requires that signals be converted from light to electricity and back again to light in order to be processed - these conversions are problematic because of the considerable power they require. An optical switch that processes optical signals as they are - without the need for conversion to electricity - would greatly reduce its power requirements. This issue has spurred ongoing research and development efforts for next-generation networks (Figure 1).

What Is an Optical Waveguide Switch Employing Silicon Photonics? 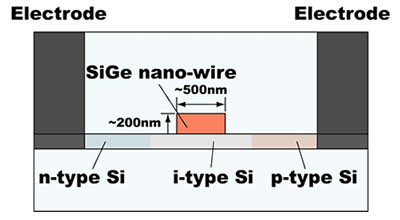 Fujitsu has developed the world's first optical switching element that uses fine-patterned SiGe in the refractive-index modulator (Figure 4). Forming fine-patterned SiGe, which has a narrower band-gap than Si, on top of Si allows for more efficient electron accumulation, and therefore less power is required for switching.