Fujitsu Limited and Fujitsu Laboratories of Europe Limited today announced the launch of the Open Petascale Libraries (OPL) project, a global collaboration initiative to develop a mathematical library(1) that will serve as a development platform for applications running on petascale-class supercomputers. Initially involving ten partners, including universities and research institutions, the project will make the developed code publicly available in open-source form, thereby contributing to the computational science community as a whole. In addition, the output from the OPL project will be applied to help accelerate the application development for the Next-Generation Supercomputer (the "K computer")(2), which is scheduled to begin operation in fiscal 2012. As a result, this project is expected to make an important contribution to a range of fields, such as the life sciences, development of new materials and sources of energy, disaster prevention and mitigation, manufacturing technologies and basic research into the origins of matter and the universe.

The launch of the OPL project is scheduled to coincide with SC10, a conference bringing together supercomputer professionals from around the world, with the project's inaugural workshop to be held on November 14 in New Orleans, LA.

"Science in the 21st century needs to contribute to the sustainability of human society and produce technologies that support individuals. Supercomputing today is an invaluable foundation for advancing science and technology, and the scientific and technological achievements and knowledge gained through supercomputing will benefit humanity on many fronts. International collaboration is also increasingly important. This project follows this direction, and we aim to participate actively and produce meaningful results."

Comment from Professor Jack Dongarra of the University of Tennessee:

"The OPL project is an important step in the right direction. Open software initiatives like this succeed at developing high-quality, standardised software and building new partnerships. Fujitsu's initiatives should be recognised as a significant advancement in the development process of petascale software and, more importantly, in collaborative communities to facilitate this development." 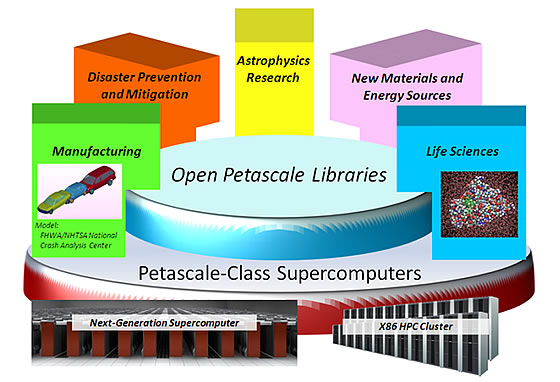 Within the OPL project, the mathematical library will be developed through collaboration with computational scientists and application developers as open-source software. Fujitsu and Fujitsu Laboratories of Europe Limited, which possess an intimate knowledge of petascale supercomputers, will provide organisations participating in the project with technical information and a development environment. Furthermore, by making the code developed as part of the project publicly available in open-source form, it is expected to be widely employed in the broad range of fields in which petascale supercomputers are utilised.

The OPL project is being established by ten initial participating organisations, including universities and research institutions from Europe, the US, Asia and Oceania: The Society of Scientific Systems (Japan), The Australian National University (Australia), Imperial College London (UK), The Innovative Computing Laboratory at The University of Tennessee (US), The Numerical Algorithms Group (NAG) (UK), Oxford University e-Research Centre (UK), The Science and Technology Facilities Council (UK), University College London (UK), Fujitsu Limited, and Fujitsu Laboratories of Europe Limited. RIKEN (Japan) and The National Institute of Informatics (NII) (Japan) are expected to join in the near future. The OPL project is expected to attract the participation of additional organisations that agree with its goals and can contribute to achieving them.

An advisory panel has been established to provide guidance on the project's overall activities from both a technological and strategic standpoint. A number of key experts will participate in the panel, including Dr Kimihiko Hirao, director of the RIKEN Advanced Institute for Computational Science, a newly formed international centre of excellence which aims to generate advanced scientific achievement and technical breakthroughs through use of the Next-Generation Supercomputer; Professor Jack Dongarra (of the University of Tennessee), one of the authors of the LINPACK, LAPACK, and ScaLAPACK mathematical libraries and one of the creators of the TOP500 list(4); Professor Bill Gropp (of the University of Illinois), the creator of the PETSc parallel numerical library and one of the driving forces behind the development of MPI(5); and Professor Anne Trefethen (of the University of Oxford), who is known for her contributions to both academic and commercial mathematical library design and development.

Petascale supercomputers, as exemplified by the Next-Generation Supercomputer, are capable of quickly performing large-scale and advanced computations that are difficult to solve using normal computers. As such, they are vital tools for solving important issues facing society, including the development of new medicines and improved healthcare, the development of new materials and sources of energy, and strategies for disaster prevention and mitigation; for improving manufacturing technologies; and for basic scientific research including the origins of matter and the universe. In order to maximise the performance of petascale supercomputers—which perform massive-scale parallel computations by linking tens of thousands of processors, each featuring many computational cores—it is necessary to develop applications that can efficiently coordinate hundreds of thousands of computational cores and smoothly perform these parallel computations. As a result, it has become a significant challenge for computational scientists to develop these applications.

About Fujitsu Laboratories of Europe Limited - A leading research

A leading research organisation, Fujitsu Laboratories of Europe is part of Fujitsu's global R&D network, with a dedicated division focused on high performance computing. Based in the UK, it acts as an important portal between technology and business, working to shorten the overall R&D cycle, en route to transforming future technologies into business realities. Fujitsu's technology roadmap is based on consistent R&D activity, in areas ranging from materials and devices, to networks, IT systems and solutions.