Extends transmission range by 6x that of existing amplifiers

Fujitsu Limited and Fujitsu Laboratories Ltd. today announced the development of a power amplifier using gallium nitride (GaN)(1) High Electron Mobility Transistors (HEMT)(2) that has achieved the world's highest output performance of 1.3W for wireless communications in the millimeter-wave W-band(3), for which widespread usage is expected in the future. The new amplifier will offer transmission output equivalent to approximately 16 times that of existing amplifiers that use gallium-arsenide (GaAs), thereby enabling W-band transmission ranges to be extended by approximately six times.

Fujitsu's new GaN HEMT-based power amplifier will make high-capacity wireless communications possible in regions in which it is unfeasible to lay optical fiber cables, in addition to ensuring high-quality communications in rain and under other conditions where the millimeter-wave signal is known to attenuate.

Part of this research was conducted under contract as part of the Research and Development Project for Expansion of Radio Spectrum Resources of Japan's Ministry of Internal Affairs and Communications. Details of the technology will be presented at the 2010 IEEE Compound Semiconductor IC Symposium (CSICS), to be held in Monterey, California from October 3-6, 2010.

In order to accommodate the demands for greater bandwidth resulting from increases in internet communications and expansions in mobile phone networks, optic fiber cables are being laid in nations throughout the world to create a high-capacity trunk-line system. This is problematic in areas with challenging topography, which has sparked interest in high-bandwidth wireless trunk lines that are capable of data transmission capacities in the range of up to 10 Gbps-on par with optical fiber cabling-as a way to bridge the "digital divide(4)" (Diagram 1).

Up until now, Fujitsu and Fujitsu Laboratories have succeeded in producing 350 mW of power using power amplifiers that employ GaN HEMTs. The millimeter-wave W-band, however, experiences significant signal attenuation due to factors such as atmospheric absorption and rain, and there has been demand for high-output power amplifiers that can transmit a stable signal across distances ranging from a few kilometers to several tens of kilometers.

In order to develop a millimeter-wave W-band power amplifier featuring high output, the following issues needed to be addressed.

Fujitsu developed the following technologies in order to resolve the aforementioned issues.

After analyzing the reason why electrons escaped from the electron channel layer and accumulated in the passivation layer, Fujitsu traced the issue to the existence of defects in the crystallization of the SiN used as part of the passivation layer. By enhancing the layer's SiN composition and crystalline structure, Fujitsu was able to build a passivation layer with minimal crystalline defects, making it difficult for electrons to accumulate. As a result, the technology was successful in amplifying high-frequency current to over two times the power of existing technology.

(2) Building a power division and combination model through electromagnetic analysis

By performing electromagnetic analysis on the complex signal distribution of the high-frequency signal, based on the physical properties of the power splitter and combiner circuits, Fujitsu successfully designed a highly precise circuit that reduces signal attenuation in the two circuits. As a result, Fujitsu was able to increase design precision by roughly 15%.

The above technologies were employed to develop a power amplifier for use in millimeter-wave W-band wireless equipment. The newly developed amplifier achieves a maximum output of 1.3W, which, among GaN HEMT power amplifiers, represents the world's highest output in this frequency band using single integrated circuit.

Furthermore, the new technology achieves a transmission output equivalent to 16 times that of existing amplifiers that use GaAs. When employed in combination with the GaN HEMT receiver amplifier developed by Fujitsu last year, it is expected that transmission ranges will be able to be extended by approximately six times in comparison to transceivers that employ GaAs. This will enable millimeter-wave band wireless communications equipment to be deployed in a wider range of fields, while at the same time ensuring high-quality communications in which ample signal output can be obtained even when there is signal attenuation due to rain and other factors.

Fujitsu and Fujitsu Laboratories plan to work to further improve the performance and expand the frequency spectrum of the new GaN HEMT power amplifier, while at the same time employing the technology in a wide range of applications, including millimeter-wave-enabled trunk lines and ultra-high-speed wireless network access. 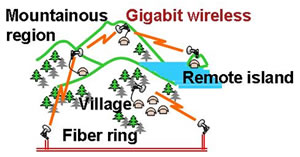 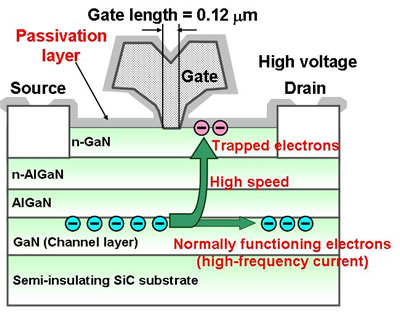 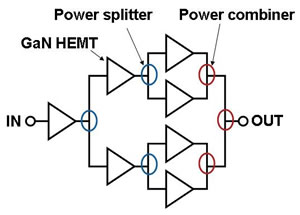 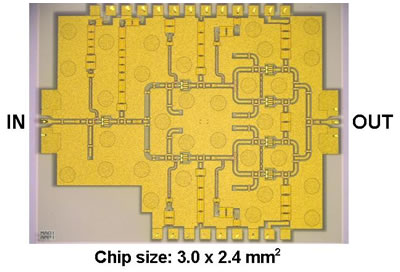 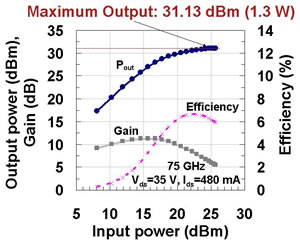 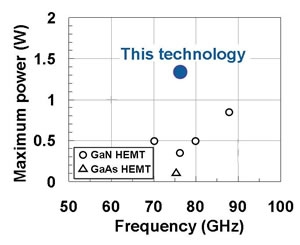