University of Tokyo, Fujitsu and NEC Succeed in Quantum Cryptographic Key Distribution from Single-Photon Emitter at World-Record Distance of 50 km

Brings quantum cryptography, the ultimate in security, a step closer to practical implementation

Institute for Nano Quantum Information Electronics, The University of Tokyo (Director: Yasuhiko Arakawa), Fujitsu Laboratories Limited, and NEC Corporation today announced that they have achieved quantum cryptographic key distribution(1) at a world-record distance of 50 km using transmission from a single-photon emitter(2). This result was the product of the three-way collaboration between the University of Tokyo, Fujitsu, and NEC, and represents a milestone in quantum key distribution because it combines a single-photon emitter, which is ideal for optical transmission bands, with a prototype of a practical quantum cryptography system. Experimental success at a practical level with a single-photon emitter brings one step closer the practical use of quantum cryptography in the 1.5 µm band, which is most desirable for long-distance data transmissions.

A report on this experiment was published today in the online edition of Applied Physics Express (APEX).

This research and development effort has been carried out under the program for the "Formation of Innovation Center for Fusion of Advanced Technologies" as part of the Japanese central government's Special Coordination Funds for Promoting Science and Technology. In addition, parts of this research used results from the "Research and Development of Quantum Cryptography" project sponsored by Japan's National Institute of Information and Communications Technology.

With the spread of the Internet, the need for more secure data communications has grown in order to protect commercial transactions, personal information, and other kinds of sensitive data. The security of public-key cryptography (currently the most common method of cryptography) is measured by the computing power needed to break the key, and as computing technology improves, may become vulnerable in the future. With quantum cryptography, a quantum cryptographic key is transmitted one photon at a time, the smallest increment possible. If an eavesdropper is listening in on the transmission line, the basic principles of quantum theory mean that the act of eavesdropping will change the signal in a way that the intended recipient can immediately detect. The ability to detect eavesdropping as a basic consequence of physical laws is quantum cryptography's greatest advantage over previous cryptographic methods and is the focus of intensive R&D efforts around the world.

The University of Tokyo, Fujitsu Laboratories, and NEC worked together to develop a new system that brought together a 1.5 µm single-photon emitter and a practical quantum cryptography system, and jointly conducted tests of quantum cryptographic key distribution. Using analyses based on security theory, the researchers demonstrated secure transmissions at distances of 50 km using 1.5 µm single-photon transmissions and showed that a quantum-dot single-photon emitter used as the quantum cryptographic system's light source could be used on a practical level. The keys to these successes were the following two technological developments.

One product of this research was the technology for efficiently producing only single photons in the 1.5 µm band from a nanometer-size semiconductor nanocrystal called a quantum dot(3). The quantum dot is placed into an "optical horn structure" (see Figure 1a) developed jointly by the University of Tokyo and Fujitsu Laboratories, and by precisely tuning the wavelength of the illumination to one of the quantum dot's discrete energy levels, it was possible to control the production of electrons and positive holes so that they would always be paired (see Figure 1b). This resulted in a single-photon emitter with 5.8% efficiency, and compared to highly attenuated laser light sources, roughly 1/20th the probability of emitting noise-causing multiple photons. This is the highest-performance single-photon emitter to operate at a wavelength appropriate for long-distance transmissions.

2. Development of a quantum cryptography system optimized for single-photon emitters

Based on planar lightwave circuit (PLC) devices using a 97-km fiber-optic key-transmission field test in a previously built real-world environment, NEC developed a new low-loss interference optical system optimized for use with a single-photon emitter and, using "time-bin coding" optical transmissions(4), an encoding method designed for quantum dots, built a new quantum cryptography system (see Figure 2). The new system is close to practical applications in terms of its resistance to disturbances in the transmission path, including polarization. The complete system matches timing with and is driven by synchronous signals from a synchronous signal generator. Specifically, it uses synchronized lasers between the sender and receiver, and transmits over a two-core fiber to match optical signals, resulting in a practical system for quantum cryptographic key distribution.

This research can be considered the first in the world to bring together work in quantum-dot optical devices with quantum information technology. Future work will focus on making systems using single-photon emitters more efficient, with the goal of practical implementations in 5–10 years. Also being developed is a current-injected 1.5 µm single-photon emitter, which promises simpler and more compact quantum cryptographic communications systems in the future. 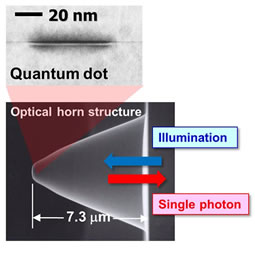 Figure 1a: TEM image of the profile of a quantum dot (above) and the optical horn structure (below). 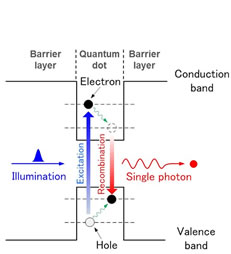 Figure 1b: How single photons are generated.

About University of Tokyo

The University of Tokyo was established in 1877 as the first national university in Japan. As a leading research university, the University of Tokyo offers courses in essentially all academic disciplines at both undergraduate and graduate levels and conducts research across the full spectrum of academic activity. The university aims to provide its students with a rich and varied academic environment that ensures opportunities for both intellectual development and the acquisition of professional knowledge and skills.The University of Tokyo is known for the excellence of its faculty and students and ever since its foundation many of its graduates have gone on to become leaders in government, business, and the academic world. For more information, please see: http://www.u-tokyo.ac.jp/index_e.html.

NEC Corporation is a leader in the integration of IT and network technologies that benefit businesses and people around the world. By providing a combination of products and solutions that cross utilize the company's experience and global resources, NEC's advanced technologies meet the complex and ever-changing needs of its customers. NEC brings more than 100 years of expertise in technological innovation to empower people, businesses and society. For more information, visit NEC at http://www.nec.com.