Fujitsu today announced the availability of a software package for the manufacturing industry, including manufacturers of home electronics, high-precision machinery, and automotive components that support companies in increasing the efficiency of their production activities in response to market demands.

GLOVIA/SCP FA PSI Collaborator automatically calculates target production volumes shared by the production, sales, and procurement departments of a manufacturer – production quotas – for a product depending on the number of daily orders received. The software can perform simulations to forecast optimal production schedules, volumes of required components and inventory quantities, as well as production sequencing, related to supply and demand. These features allow customers to quickly share target production volumes internally without the need for individual coordination by the respective departments. As a result, company-wide productivity improvements, including the reduction of excess inventory, speeding up the decision-making process, and making the manufacturing floor more efficient, are thus realized.

In addition, the Fujitsu Group plans to gradually deploy this software within its factories for the production of servers, PCs, and other products. The company will then support its customers' manufacturing initiatives based on this hands-on experience.

GLOVIA/SCP FA PSI Collaborator was developed by Fujitsu Advanced Engineering Limited, which possesses a wealth of experience in developing systems that support the production activities of manufacturers.

In recent years, companies in the manufacturing industry have been deploying production scheduling systems, which manage the optimization of schedules to improve productivity and reduce excess inventory. In regards to target production volumes which are necessary prior to the scheduling of production work, companies are facing challenges associated with increasingly diverse user needs, as well as the emergence of gaps between expected and actual market demand resulting from the difficulty of forecasting daily orders due to the shortening of product lifecycles.

In order to address these challenges, Fujitsu has unveiled GLOVIA/SCP FA PSI Collaborator, a software package equipped with features to control optimal target production volumes based on demand fluctuations and shares them between the production, sales, and procurement departments of a company, while efficiently allocating resources (personnel, materials, and money) on a production line.

2. Eliminates overburden, inconsistencies, and waste in production through level-loaded production that reflects the actual volume of orders received

In level-loaded production(1), which aims to make daily production activities and volumes consistent, it becomes difficult to adjust production to quickly reflect the actual number of received orders, which change on a daily basis. As GLOVIA/SCP FA PSI Collaborator allows users to quickly check certain indicators—including the production consistency of each model of a product, customer progress, and the inventory status of components—the system enables users to achieve consistent production levels while handling unexpected orders at the same time.

In addition to a PSI(2) sheet that is similar to regularly-used spreadsheet software, the program's interface includes an easy-to-read order accumulation graph, as well as a user-friendly ordering list. The interface is simple and easy-to-use, allowing users to handle and check information freely. 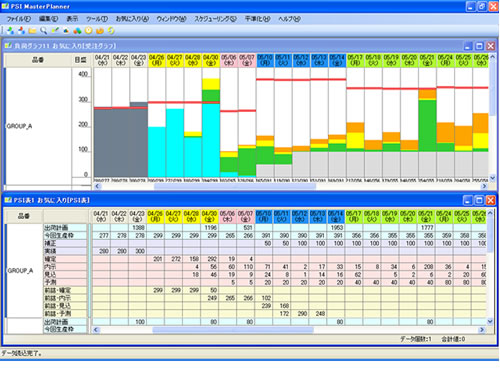 * For a ten-client license. Reference clients can be added free of cost.