Fujitsu today announced the joint development of an electronic laboratory notebook system with Kyowa Hakko Kirin Co., Ltd., designed to revolutionize the process of developing new pharmaceuticals by electronically recording and sharing all experimental data, including test protocols and results, as well as structural formulas for compounds. The new system enables this knowledge to be used and shared in a way that enhances the sophistication and speed of pharmaceutical development efforts. The electronic laboratory notebook system recently went into full-scale operation at Kyowa Hakko Kirin's synthesis research division, which synthesizes compounds that are drug candidates.

The new system is designed to tie into Kyowa Hakko Kirin's support system for checking controlled substances, so that materials can be checked seamlessly and with minimal overhead during testing to see whether it is a regulated narcotic or stimulant. This makes it easier to exclude controlled substances early in the process.

Kyowa Hakko Kirin develops new pharmaceuticals using advanced biotechnology based on antibody technologies. To bring their drug development to a higher level of sophistication while lowering costs and shortening development cycles, the company's synthesis research division, which performs synthesis of compounds for use as drug candidates, saw an urgent need to replace their existing paper-based system of managing test procedures and results, structural formulas for compounds, and other experimental data. The division needed an alternative that allowed them to use and share knowledge more effectively and quickly.

Fujitsu worked with Kyowa Hakko Kirin to build a system based on E-Notebook Enterprise from CambridgeSoft Corporation, which has a dominant share in the US and European markets. The new system, which electronically collects and manages research data, making its details and progress visible for the synthesis research division, was built in only four months.

In the past, Kyowa Hakko Kirin researchers manually wrote all of their research notes from the very beginning. Through the new system, researchers can record test procedures and results, structural formulas for compounds, and other experimental data using computers while referencing similar experimental data and formulas already in the system making the overall process efficient. The system also simplifies complex data collection tasks, such as generating periodic reports and preparing patent specifications. Furthermore, the system ties into Kyowa Hakko Kirin's support system for checking controlled substances, making this electronic laboratory notebook system that seamlessly checks whether any compounds in use are stimulants, depressants, or other controlled substances, an industry-first. The end result is that researchers can share knowledge more effectively, lighten their workload, and conduct more effective R&D.

Since signing a sales agreement in 1995 with CambridgeSoft to market ChemDraw, a program for drawing chemical structures, Fujitsu's 15-year relationship with the company has resulted in sales and support contracts with some 1,000 client firms, giving Fujitsu Japan's most extensive sales and deployment track record with E-Notebook Enterprise. With intensifying global competition in the pharmaceutical industry, Fujitsu's ability to provide end-to-end services, from configuring an electronic laboratory notebook system to providing ongoing support, helps customers transform their own operations to sharpen their competitive edge. 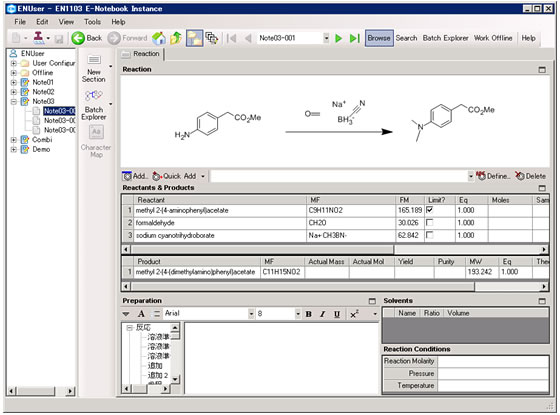