RCAST, The University of Tokyo,Fujitsu Limited

Fujitsu and the Research Center for Advanced Science and Technology (RCAST) at the University of Tokyo today announced that they have jointly built a supercomputer system for use in the development of drugs to treat cancer relapse and metastasis. The new system began operations on August 1, 2010.

The new supercomputer is a cluster employing Fujitsu's PRIMERGY BX922 S2 blade servers. Comprised of 300 nodes, the system features a theoretical peak performance of 38.3 teraflops(1) and will be utilized in performing simulations to design genome-based antibody drugs that treat the relapse and metastasis of cancer. 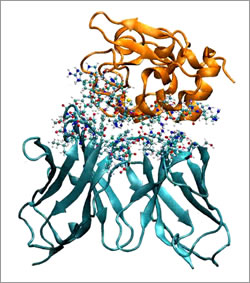 Led by Professor Tatsuhiko Kodama of RCAST, the University of Tokyo, the research project on the "Practical Applications of Multifunctional Antibodies for Treating Cancer Relapse and Metastasis Designed by Molecular Dynamics" is part of Japan's front-line R&D support program, which aims to pioneer the use of computer simulations to design genome-based antibody drugs for cancer that take advantage of achievements in genome sequencing. The project also strives to launch clinical trials and facilitate the actual use of these drugs.

Up until now, R&D for antibody drugs has undergone two generational shifts. Starting in the 1990s, research involved developing antibody drugs through animal testing and then "humanizing" the resulting antibodies for use in treatment on humans. The second generational shift, which began in 2000s, led to the production of antibodies that can directly act on cancer utilizing radiation therapies. The aim of the new research project is to enable researchers to employ supercomputer simulations to design basic structures for antibody drugs, thereby developing revolutionary third-generation antibody drugs with fewer side effects. These third-generation antibody drugs would treat types of cancer with a high incidence rate in Japan, such as cancers of the lung, colon, stomach, liver, pancreas, prostate and breast, as well as advanced-stage cancer that has relapsed or undergone metastasis. For the first time ever, this research will use molecular dynamics to design artificial antibody drugs, by simulating the interactions between antigens (proteins), which are part of a cancer cell, and antibodies (proteins). Compared to traditional IT-based drug development simulations which observe the interactions between simpler molecules and proteins, RCAST's methodology required roughly 10 times the quantity of calculations. As a result, researchers decided to deploy a supercomputer capable of performing large amount of calculations within a short period of time.

By employing the new supercomputer, RCAST aims to design artificial antibodies in a matter of a few months, significantly shortening the design process compared to previous simulation methods, which would require at least 3-4 years. In the future, the team also hopes to perform researches utilizing the Next-Generation Supercomputer (a.k.a. K Computer)(2) for developing a wider variety of antibody drugs.

Overview of the New Supercomputer System

The supercomputer system is a cluster comprised of 300 PRIMERGY BX922 S2 blade server nodes. Each node features two Intel Xeon X5650 processors, allowing for a total of 600 CPUs and a theoretical peak performance of 38.3 teraflops. The interconnect that manages inter-node communications is equipped with an InfiniBand QDR network interface, which enables data to be transferred at 4GB/s, while allowing for high-speed parallel calculations.

In terms of storage, the system is equipped with five ETERNUS DX80 disk array units with an effective RAID6 capacity of 1 petabyte.

RCAST (Research Center for Advanced Science and Technology) was established in 1987 and was formally acknowledged as the 11th research institute of the University of Tokyo. Its mission is to contribute to the development of science and technology by expeditiously taking on new challenges arising from the advancement of science and changes in society thereby exploring new areas of advanced science and technology for humankind and society. It is known for its uniqueness of cross-disciplinary research, and Laboratory for Systems Biology and Medicine(LSBM) led by Professor Kodama constitutes an important research domain of RCAST, dissecting the pathogenesis of cancer and atherosclerosis, diseases which are major causes of death and debility in many industrialized countries.For more information, please see: http://www.rcast.u-tokyo.ac.jp/en/

Chiyoko Kanno
Director in Communication
RCAST, The University of Tokyo

Intel, Xeon are trademarks or registered trademarks of Intel Corporation in the United States and other countries.