60% more compact than before; progress toward practical application as a next-generation non-volatile memory

Fujitsu Laboratories Limited today announced the development of a new memory cell circuit for spin-torque-transfer MRAM(1) that reverses the typical order of magnetic tunnel junctions (MTJ)(2) to enable a space savings of 60% and achieve a greater degree of integration than was previously possible. Spin-torque-transfer MRAM is regarded as a next-generation non-volatile memory(3) with high potential to become a replacement for NOR-type flash memory.

Many electronic devices, including mobile phones and PDAs, use microcontrollers with embedded flash memory to store software and other data that can be re-written. However, NOR-type flash memory that is used in microcontrollers is expected in the near future to reach the physical limits of its miniaturization, which has prompted research into a number of potential next-generation successor technologies.

One of these next-generation memory technologies that has attracted a great deal of attention, spin-torque-transfer MRAM, is a memory storage element that makes use of the phenomenon in which passing a current through a magnetic material causes its direction of magnetization to reverse. Passing a current through the material causes the direction of magnetization to either be in a parallel or anti-parallel state. This high or low electrical resistance can be handled in terms of binary digital information, either 1 or 0, enabling the storage element to be used as non-volatile magnetic memory (Figure 1).

While it has been possible to miniaturize MTJ elements used in spin-torque-transfer MRAM, shrinking the adjoining cell-select transistors had thus far posed a challenge.

The memory cell circuit in spin-torque-transfer MRAM is a circuit that connects the MTJ element with a cell-select transistor, which act as switches that select which MTJ elements to write to or read from. With existing memory cell circuits, when the MTJ element of a spin-torque-transfer MRAM has been written to a high-resistance state ("1"), voltage is lowered through variable resistance - this requires a larger current to write than when an MTJ element it is switched to a low resistance state ("0"), which is not affected by variable resistance. In other words, because the cell-select transistor's current-driving capability is low, writing to a high-resistance state ("1") would require a significant current. As such, even with a low driving-current capability, cell-select transistors need to be relatively large to ensure an adequate write current, which has been a barrier to reducing transistor size. Fujitsu Laboratories has reversed the order of the MTJ element's magnetic layers, enabling the development of a new MTJ element with a top-pinned structure - that differs from previous structures - that consists of a pinned layer, tunnel barrier, and free layer. However, because the distance between the tunnel barrier of the top-pinned MTJ element and its bottom electrode has been reduced, electrical short failures are more likely to occur during fabrication - as a countermeasure to address this issue, Fujitsu Laboratories has inserted a buffer layer to maintain separation between the tunnel barrier and bottom electrode, which allows the output from the low-resistance ("0") writing to travel in the same direction as the cell-select transistor's low driving-current capacity, thus making it possible for the cell-select transistor to still function at a smaller size. 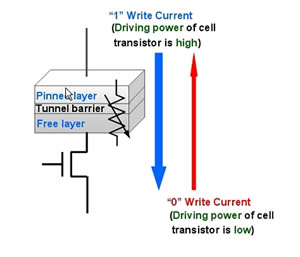 This technology was used to reduce the area of memory cell circuits by 60%, thus enabling a higher degree of integration unattainable with previous spin-torque-transfer MRAMs, resolving one of the technology's key technical implementation challenges for practical use.