Through the introduction of this system, Ryoshoku can automatically replenish Inageya's inventory with just the required quantity of needed products, thereby enabling Inageya to keep its inventory levels low and improve its operating efficiency. This also benefits Ryoshoku, which can work together with Inageya to enhance its strategic initiatives, such as the creation of stores that meet consumer needs.

Ryoshoku boasts a long history as a food wholesaler dealing in food and beverages including fresh foods, processed food, frozen foods, ice cream, and alcohol. Given its experience in the industry, Ryoshoku strives to develop food products that suit consumer tastes by making recommendations based on lifestyle trends to its business retailers.

Inageya, a major food retailer and customer of Ryoshoku, with more than 100 locations in the Tokyo area, has been developing its "ina21" chain of grocery stores around the concept of "every day low prices." These smaller-scale stores with slimmed down operations often carry a smaller selection of popular basic items. Due to limited floor space and a smaller number of staff, there is a significant need for timely and accurate inventory management. As a result, Ingeya has been forced to revise its ordering process, which previously relied on a food distributor to issue inventory orders based on point-of-sale (POS) sales data and rule of thumb methods.

In implementing the new system, Inageya and Ryoshoku worked with Fujitsu and Fujitsu System Solutions to jointly build a system based on the VMI support system that has been effective at reducing inventories levels in the apparel and automotive businesses, as well as at Walmart, North America's largest retailer. The new system began operations in the frozen foods and ice cream sections of three "ina21" grocery stores located in the Nerima and Suginami wards of Tokyo. 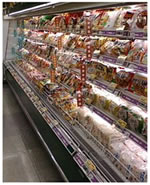 The system includes a new function that has been added to Ryoshoku's mission-critical system, currently being hosted at Fujitsu's datacenter. This function calculates the quantity and names of products needed to replenish the inventories of "ina21" stores, based on Inageya's POS sales and inventory data, and automatically transmits the information directly to Ryoshoku's mission-critical system. As a result, "ina21" stores can now adjust target quantities to match their needs according to seasonal and other changes on the spot. The new system will enable Inageya to maintain accurate inventories, reduce the likelihood of sales lost to stock outages, increase the efficiency of inventory management and ordering, and reduce space required for inventory management. As the new system can also track Inageya's POS sales and revenue data in real time, as well as measure the products and quantities needed for restocking, Ryoshoku can benefit from a reduction in sudden distribution costs arising from unexpected short-period demand. As sophisticated analyses of the highly-accurate data can now be conducted, Ryoshoku can also provide Inageya with more thorough sales proposals.

Inageya and Ryoshoku plan to gradually deploy the VMI support system in all 16 of the currently operational "ina21" grocery stores. An important tool for helping retailers and wholesalers to work more closely together and create better stores, the Fujitsu Group will continue to assist both Inageya and Ryoshoku's businesses in the future through the VMI system.