Fujitsu Limited and iCAD Limited today announced the development of the world's first computer aided design (CAD) engine, designed to be used as part of a 3D CAD system for designing machinery that is capable of processing data for one million parts in 0.2 seconds, in Japan.

The new engine features processing performance that is 200 times the speed of existing 3D CAD systems, giving it the power to process large-scale machinery with one million parts in only 0.2 seconds. Although the processing performance limitations of existing systems have traditionally forced engineers to design mechanical, electrical, and control systems using separate systems, the new engine enables the design of these elements to be consolidated into one system, streamlining the task of designing large-scale machinery.

In addition, the ability to share 3D data between departments, from design to manufacturing, prevents wasted effort and information discrepancies that can take place at each stage in the design process, thereby reducing the need for revisions during manufacturing, shortening development lead times, and increasing product quality.

This engine is to be incorporated into iCAD V7, which Fujitsu plans to release at the end of 2010.

In the machinery industry, 3D CAD has become an indispensable tool in the race to quickly bring new, high-quality products to market. But given the massive volumes of data involved in designing large-scale machinery, coupled with limitations on the volumes of data that can be handled, engineers are forced to develop designs using simplified or segmented data. Furthermore, because of increasing data volumes of electrical and control system information including machining and assembly information, mechanical, electrical, and control systems must be designed using separate systems. As a result, when analyzing the consistency of machines as a whole and inspecting the actual equipment, engineers often need to make revisions or extend lead times.

In order to address these issues, Fujitsu has developed a 3D CAD engine that is capable of processing one million parts in 0.2 seconds. In the future, the company plans to incorporate the engine into its new iCAD V7 package. 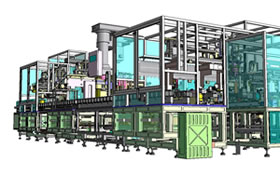 The method typically used for representing 3D bodies on a computer is to split them into numerous small surfaces that approximate their intended shape. With large machinery, however, this greatly increases the volume of data that needs to be processed.

The new engine employs a new representation method that allows most of the parts of a machine to be precisely represented as mathematical expressions, making it possible to dramatically reduce the amount of memory required. This allows for a 200-fold increase in performance compared with the surface-approximation method.

Fujitsu has recently added to its PLM(1) Business Center, a team to enhance the promotion of CAD products. It has also deployed technical staff to iCAD, which is in charge of product development, who will provide support for business deals involving CAD products. This program, along with approximately 1,000 staff from Fujitsu's offices across Japan and its sales partners in the manufacturing sector, will serve to enhance sales and promotional activities for products based on the new engine (scheduled for the end of 2010).