Reduces image capture time of image sensors by half; helps to close the digital divide

Fujitsu Limited and Fujitsu Laboratories Ltd. today announced the development of an indium phosphide-based high electron mobility transistor (InP HEMT)(1) using their proprietary "space cavity" structure that, operating at the millimeter-band frequency level of 94 GHz(2), reduces the noise level generated by the transistor by approximately 30% compared to previous technologies(3), to 0.7 decibels, resulting in the world's lowest noise levels. The novel noise-lowering technology will enable sensitivity enhancements in millimeter-band receivers, which in turn would enable the time required for image capture by image sensors(4) - being deployed for anti-terrorist initiatives in major airports - to be reduced by nearly half. In addition, as the new technology can enable range extension by 20% of high-capacity wireless transmission distance on par with optical transmissions, wireless networks can be used in place of trunk lines in locations where it is difficult to install fiber-optic cabling, thereby helping to close the digital divide(5).

Part of this research was conducted under contract as part of the Research and Development Project for Expansion of Radio Spectrum Resources of Japan's Ministry of Internal Affairs and Communications. Details of this technology will be presented at the 22nd International Conference on Indium Phosphide and Related Materials (IPRM 2010), held May 31 - June 4 in the city of Takamatsu, located in Japan's Kagawa Prefecture.

In contrast to infra-red or optical signals, radio waves in the millimeter-band frequency range - which extends from 30 GHz to 300 GHz - are permeable and able to travel through thin walls and fabric. As part of their anti-terrorism prevention efforts, major airports around the world are considering deployment of image sensors that take advantage of the permeability of millimeter-waves.

Furthermore, as commercial use of wireless networks is limited and thus makes it easy to secure large swaths of bandwidth, millimeter-wave signals are ideal for transmitting very large volumes of data exceeding several gigabits per second. High-capacity millimeter-band transmission equipment can be used in place of trunk lines in locations where it is difficult to install fiber-optic cabling, making such equipment also useful in helping to close the digital divide. (Figure 1) 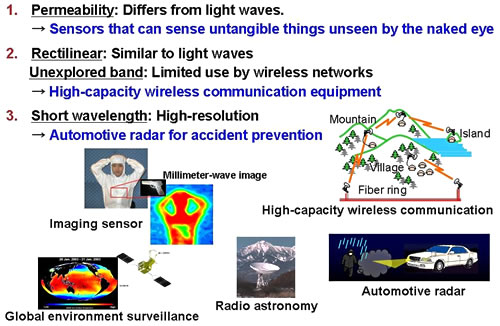 Figure 1: Features and applications of millimeter-waves

To make a millimeter-band transceiver highly sensitive (Figure 2), in the high electron mobility transistor (HEMT) that is used in the transceiver's amplifier, it is necessary to control the noise that is generated along with high signal amplification rates. If the noise level within the HEMT is high, the noise interferes with reception, thus making detection of weak signals impossible. 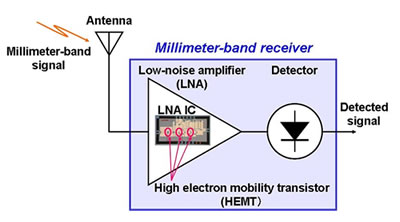 Based on an analysis of the mechanisms by which noise is generated, Fujitsu developed novel technology to reduce noise. Key features of the new technology are as outlined below:

1) Employing a "space cavity" structure in the InP HEMT

In conventional InP HEMTs, if the coupling capacitance between the gate and the source or drain is large, a problem arises in that the millimeter-band signal amplification rates fall. To resolve this problem, Fujitsu eliminated the inter-layer dielectric film around the gate electrode, forming instead a "space cavity" that reduces the coupling capacitance. This technology was developed under a research contract from Japan's Ministry of Internal Affairs and Communications with the objective of increasing the speed of InP HEMTs, and for the first time ever, Fujitsu verified that reducing the coupling capacitance through the introduction of this "space cavity" structure has the added benefit of reducing noise.

Since the gate electrode on a HEMT is the source of noise, reducing gate resistance is an effective method for reducing noise. For that reason, HEMTs for lower frequencies that are used in transceivers for home satellite broadcast systems use a T-shaped gate, with a low-resistance head electrode placed on the upper part of a micro-electrode to reduce gate resistance and noise. However, when using a low-resistance T-shaped gate in the 94 GHz band, because the distance between the T-shaped gate and the source or drain is narrowed, there is an increase in noise from coupling capacitance. With the application of the "space cavity" structure, Fujitsu has now confirmed that even in the 94 GHz band, coupling capacitance is reduced when using the T-shaped gate. Moreover, Fujitsu also verified that increasing the length of the T-shaped gate's head also serves to reduce noise.

Employing the newly-developed technology, Fujitsu created an InP HEMT with a gate length of 75 nanometers(7) (see Figure 3b). As a result, Fujitsu succeeded in reducing noise within the transistor by 30% compared to previous technologies. The noise figure(8), which is a noise index for noise within the transistor, was reduced to 0.7 decibels, thus resulting in the world's lowest noise levels. (Figure 4)

Configuring an amplifier with the newly-developed HEMT greatly improves the sensitivity of millimeter-band receivers, holding the promise of reducing by half the time image sensors require for image capture and extending the transmission range of high-capacity millimeter-band transmission equipment by approximately 20%. As a result, security checks at airports would be much quicker, and wireless systems with date transmission capacities equivalent to optical transmission systems could be created, thereby accelerating the widespread deployment of millimeter-band systems that deliver speed and convenience in our daily lives.

Figure 3: Cross-sectional views of conventional InP HEMT (a) and InP HEMT with "space cavity" (b) 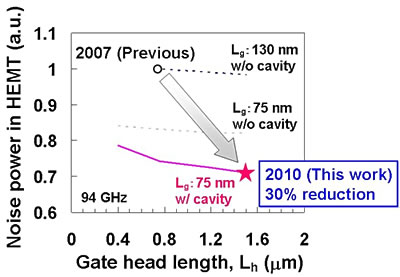 Fujitsu plans to equip high-performance image sensors and high-capacity transmission equipment with amplifiers that will employ the newly-developed low-noise InP HEMT, targeting practical-use commercialization for 2012. Fujitsu will also strive to expand the range of applications into such areas as radio astronomy and the environmental monitoring of the earth.